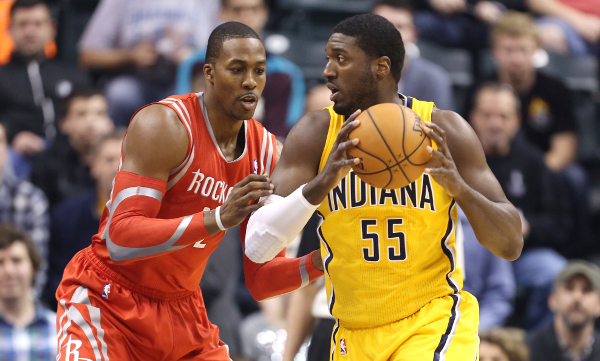 The Miami Heat Stopper. LeBron’s Playoff Kryptonite. These are two phrases that have been used to describe the 7-foot-2 center Roy Hibbert. The legend and hype around the Pacer All-Star has continued to grow astronomically after the drawn-out, seven-game series epic battle that took place in last season’s NBA playoffs. Miami has even gone as far as rolling the dice in signing Benjamin Button-brittle Greg Oden to prepare the whole season for one sole purpose: Stop Roy Hibbert.

However, contrary to popular belief by practically everyone with a pulse, Hibbert is more of a hindrance to the Pacers' championship aspirations than he is the herald savior. In one playoff series, Hibbert catapulted his reputation from run-of-the-mill big man to the next Hakeem Olajuwon faster than Miley Cyrus transformed from Disney sweetheart to making Lady Gaga look like a saint.

Hibbert largely is a beneficiary of a social media society that loves to over-analyze and over-hype everything and anything that can be posted or tweeted. Why is Hibbert more of a thorn in the side of the Pacers' title hopes than he is a franchise cornerstone big man? You’re about to find out.

Sure, Hibbert made his mark on the league defensively. But his 22.1 ppg average in last season’s playoff series against the Heat earned him offensive hype that is a little premature. Don’t get me wrong, I think he has the ability to be a productive offensive player with his high basketball IQ, good feet and soft hands. But let’s hold off on the “dominant” label for now.

One of Hibbert’s main problems in his post game is that he rarely ever establishes low position when he receives that ball.

Nearly every night Hibbert has a height advantage over his opponent, but allowing the defender to push him away from the basket negates the effectiveness and productivity of his low-post game. If a big man can catch with a foot already in the paint, he has already won 75 percent of the battle.

However, only 1 out of every 5 post touches Hibbert receives does he actually have a foot in the paint. Hibbert is in a ‘back-to-the-basket’ post up situation 44.4 percent of his attempted shots, but he is only converting at a 0.84 points per possession rate. That’s only average in the league, and puts him behind Miles Plumlee, for example.

Dwight Howard has never been mistaken for a low post-move aficionado. Even after his work with Olajuwon and Kevin McHale. But he is a freakishly athletically gifted player that can dominate with the Shaq-game: offensive rebound, dunk. Hibbert doesn’t have that luxury. He needs to rely on a variety of post moves that, frankly, he doesn’t possess.

Overall, in single-covered post up situations Hibbert is only shooting 42.9 percent and has been very ineffective when posted up on the left block, where he attempts 51.6 percent of his post up situation shots. Hibbert basically has two moves; a baby hook and a face-up jumper. He mixes in the occasionally fall-away jumper as well, which he should probably mix out of the rotation.

What upsets me as a professional shooting coach and skills trainer is that Hibbert relies far too much on his baby hook shot instead of taking advantage of his enormous frame and high basketball IQ. Not only does he rely on his baby hook too much, he continually attempts an extremely low-percentage left-handed baby hook.

This is the Brandon Jennings of step-back fade away jumpers. When he turns right shoulder, he is attempting the hook 51.9 percent of the time and is shooting an ice cold 29.6 percent ranking him in the bottom 13 percent of the league. Not the most efficient shot to say the least.

The NBA is a ball screen league. There’s no denying it. Guarding the pick-and-roll can be like solving a Rubik’s cube at times for teams. Stockton and Malone, Nash and Stoudemire – it basically made them who they are. George and Hibbert? Yeah, not so much.

With Hibbert’s size advantage on a nightly basis and his Calvin Johnson-esque hands, he settles far too much for popping out of the pick-and-roll as opposed to attacking the rim on the roll.

Hibbert is known for being an above-average mid-range jump shooter, but if we take a deeper look into the analytics, you’ll see he’s more underwhelming than perceived. In catch-and-shoot situations off a ball screen, Hibbert is shooting 40.7 percent at a 0.83 points per possession rate, ranking him in the bottom 26 percent of the league.

That’s great if you are hitting a baseball, but definitely not shooting a basketball. And when there is a hand in his face, his percentage drops to 27.6 percent ranking –him all the way in the bottom 9 percent. This doesn’t fair well for Hibbert, whose release time as it is has never been mistaken for Ray Allen’s.

WHAT SHOULD ROY HIBBERT DO TO REMEDY THE PROBLEM?

On February 16, Hibbert will find himself on the court of the New Orleans Arena in his second All-Star Game. And deservingly so. He’s a unique talent that undoubtedly has the ability to change the course of a game and the flow of the opponent’s offense with his length, IQ, and savviness on the defense end.

However, Hibbert hasn’t only been changing the offensive flow of the opponent, but also his Pacer teammates as well.

The good news is, all of Hibbert’s flaws in his offensive post game can be fixed. And once he does fix these inequities, he will become the most dominant big man in the game today.

Hibbert needs to make it a priority every time on the offensive end to initiate much deeper position. He needs to raise his post touches with a foot in the paint to closer to 3 out of every 5 as opposed to the current 1 out of 5. Apart from the knowledge and focus of skillfully fighting for this deep position by studying his nightly defender’s tendencies on the defensive end, Hibbert also needs to increase lower body strength and foot quickness.

In a recent interview with Grantland, Hibbert admitted he couldn’t do a single, weightless squat when he arrived at Georgetown. He and Kevin Durant certainly wouldn’t make Arnold Schwarzenegger proud.

However, Hibbert’s commitment to offseason lower body strength training with an emphasis on mobility and stability is what will help him to gain more consistent deeper position in the post. His strength trainer Mike Robertson said, “It’s the stuff that I know as a performance coach will translate to him moving and feeling better on the court.” Kudos Mike, it’s the same when it comes to skills training.

As far as Hibbert’s coveted left-handed baby hook, it’s got to go. Hibbert needs to realize where he is most effective and put himself in those advantageous situations. Like I had mentioned, Hibbert has been very ineffective from the left block, shooting 35 percent.

However, from the right block Hibbert has been vastly more effective, shooting right at 50 percent and ranking in the top 14 percent of the league at a 1.09 points per possession. 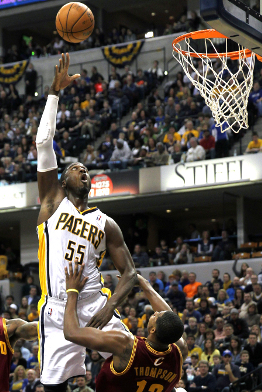 Why is Hibbert so much more prominent from the right block than the left? When he is able to turn middle, he can finish with a right-handed hook instead of his low-percentage left. He is shooting a scorching 59.3 percent with his hook shot from the right block when turning over his left shoulder (i.e. right-handed hook). It doesn’t take a Georgetown grad to figure out where he is most effective from.

Hibbert also needs to take a page from LeBron’s book: How to Spend an Off Season in the Post. Hibbert needs to focus on adding an up-and-under step through move to compliment his baby hook, as well as a “Dream Shake” baseline drop-step finish.

Hibbert needs to start channeling his inner Amare Stoudemire (pre multiple knee surgery version) and start attacking the rim with reckless abandon on the pick-and-roll instead of setting for a pick-and-pop slow release, methodical jumper.

For a big man at 7-foot-2, Hibbert is a more than a serviceable free throw shooter at 73 percent for his career. The more he attacks the hoop on the pick-and-roll, the more he will find himself at the free throw line. He’s only averaging 3.1 free throw attempts per game, which is far too low.

Andrea Bargnani, who is widely regarded as one of the softest players in the league, is averaging 3.2 free throws per game. Come on, Roy.

Hibbert is actually converting at a 1.14 points per possession rate on rolls to the basket in pick-and-roll situations, which ranks him in the top half of the NBA, light years better than his pick-and-pop rate.

It’s relatively clear to see what facets of Hibbert’s offensive game he struggles in and what he needs to do to turn those deficiencies into strengths. 7-foot-2 with a high basketball IQ is hard to teach.

If Hibbert can focus on establishing deeper low post position on the catch, work more from the right block than the left, add in a couple low-post counter moves to his hook shoot, cut down on left-handed hook attempts, and attack the rim like a mad man in pick-and-roll situations, he can become as much of a game-changer on the offensive end as he is defensively.

And he will continually haunt Erik Spoelstra’s dreams from here on out. Hibbert has the ability to become the top big man in the game for years to come if he can make these adjustments. 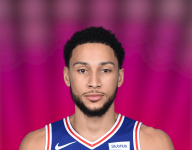