What was wrong with Michael Jordan's game?

What was wrong with Michael Jordan's game? 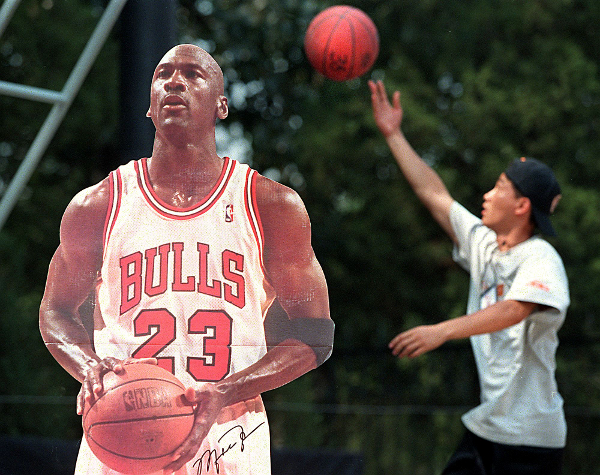 Twenty-six missed game-winning shots, seven years in the NBA until he won a title, career 32 percent three-point shooter, and the best ‘Robin’ side-kick ever. Ladies and gentleman, I’m here to tell you Michael Jordan was overrated.

Now don’t get all bent out of shape, take a quick 20-second time-out. Michael Jordan is one of the greatest players of all time. I’m not here to debate that and go on some crazy tangent comparing him to Gilbert Arenas or someone of that caliber.

I’m here to state the facts and point out that Jordan isn’t quite the untouchable god-like figure that everyone portrays him to be. Jordan is the benefactor of perfect circumstances, ideal timing, and taking advantage of the open-door opportunity named Nike.

Before you come hunting me down at my house, let’s take a deeper look into exactly why MJ isn’t everything he is made out to be.

First of all, let’s look at Jordan’s skill set. Now whenever anyone thinks of Jordan, they think of: game winners, never having an off night, basically an unstoppable force. Revision is history; we always seem to remember the ‘good ole days’ in a brighter light than the present.

As the renowned greatest player of all time and by default the best shooting guard to play the game, it’s ironic that he really didn’t shoot a high percentage from three. Jordan’s first four years in the league, he never shot higher than 18 percent from beyond the arc. I’ll give him credit, as his career progressed his three-point percentage did as well.

I’m not here to question Jordan’s work ethic and commitment to improving his craft; that we can all agree on is obvious. However, it is interesting to note that as his three-point percentage rose, his overall field goal percentage declined. His final seven seasons, he didn’t crack 50 percent from the field. That’s just the regular season, though.

The overall consensus has always been once playoff time comes around, Jordan took his game to the next level. I know it can’t all be measured by shooting percentages, but it is worth noting that both MJ’s field goal and free-throw percentage are lower in the playoffs than the regular season.

Jordan does deserve some credit, though, of course. He owns the highest PER rating in the history of the NBA at 27.91 and is Top 5 all time in win-share percentages, which rates a player’s overall impact on his team’s wins. So even in the analytical age that we are living in, Jordan would still be pretty effective.

The corner three though, not so much. Stick to the tongue-hanging-out dunks and plethora of free throws.

Ok, I agree, MJ’s shooting woes is not a revelation to anyone. But the fact that Jordan didn’t always show up in big games should be a point that is not overlooked. To even question Jordan as the greatest ever can be such a touchy subject to some that it’s almost on par with blaspheming a person’s religion. That’s too far overboard. But, be it as it may, that’s the truth.

Let’s check out some of Jordan’s “big moment” off nights to prove my point.

I don’t want to get into a LeBron James debate with this article because LeBron still has a ways to go to catch Jordan of course, but why does the public remember LeBron’s 27 points, 19 rebounds, 10 assists playoff game against the Celtics in 2010 as a horrible game and that he gave up?

If I’m a coach and my star player is going for a monster triple-double like that on the road in a hostile environment, then I want my player giving up all the time. So why do Jordan’s bad games get overlooked and even LeBron’s good games get negatively dissected? Well, I’ll tell you why. 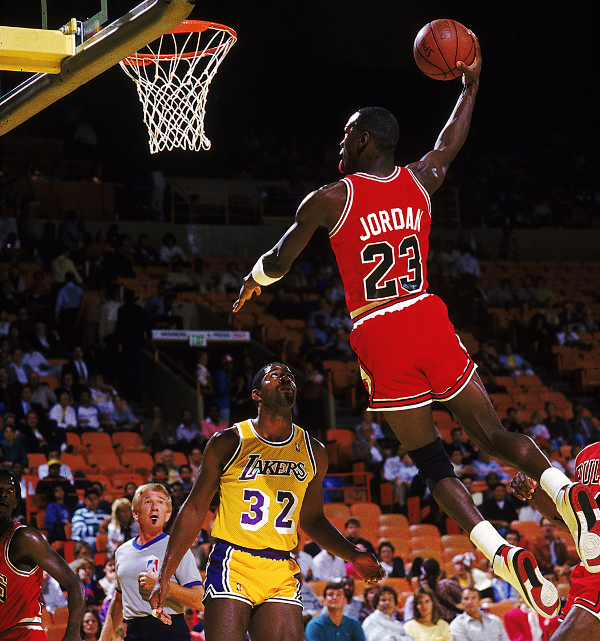 Jordan is a product of the perfect timing and filling a void that was much needed by the NBA and a little company known as Nike. When Jordan came into the league in 1984, the NBA had finally hit popularity throughout the United States thanks to the Magic vs. Bird rivalry. The NBA was looking to capitalize on this upward swing of popularity and knew with finding the one, they could do just that.

As great as Magic and Bird were, you can count the number of highlight dunks on one hand that you remember seeing both of them combined produce. Dr. J was on his way out, the NBA needed a new electrifying superstar.

Couple this with the fact that Nike was a quickly rising factor in the shoe and brand game, and Phil Knight wanted to make a big splash in the NBA market. It might seem odd to think now that Nike wasn’t always the NBA power, when Jordan came into the league that crown belonged to Converse and Adidas. And all MJ wanted to wear when he got into the league was adidas.

However, it just so happened to be an inopportune time for adidas going through management transition at the time and Converse was content with Bird, Magic, and Dr. J. on their plate. Talk about the ultimate swing and miss by two major brands. Jordan was extremely disappointed by the outcome.

Luckily for Nike, Jordan’s agent was David Falk, a good friend of Nike founder Phil Knight. And Knight, he was a pretty innovative guy himself. In March of 1985 The Air Jordan Is, hit stores at an unheard of steep price of $65 a pair. By May, Nike had sold $70 million worth. The rest is history, the greatest marketing campaign for any athlete ever had been born. Nike had found their poster boy.

Nike continued to put millions behind the Air Jordan campaign and with a coming out party at the 1984 Olympics for MJ, he had now become a global icon. Nike continues to feed off the Air Jordan brand. And why not, it’s valued at over $2 billion net worth alone. And that is why Jordan will forever be untouchable and marketed as the greatest ever no matter what anyone else does. 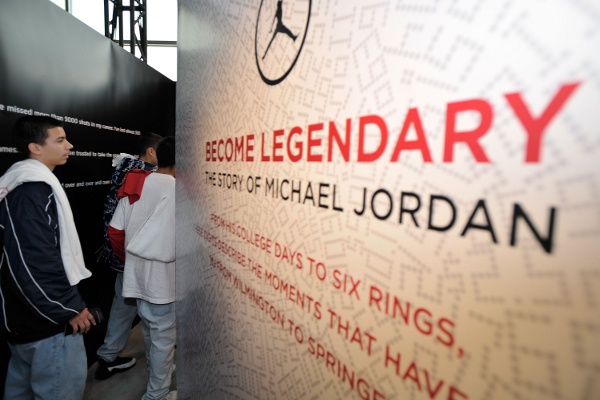 Michael Jordan was also the benefactor of ideal circumstances in Chicago. Everyone talks about how Portland made a huge mistake not drafting MJ with the second overall pick in the 1984 draft. But why would they?

The Blazers currently had a budding star at the same position named Clyde Drexler. Jordan landed in the perfect situation in Chicago where they desperately needed a scorer and a savior. He struggled though the first 4-5 years of his NBA career without any help and three coaching changes. Until everything came gift wrapped in ’88 and ’89 with the additions of Scottie Pippen and relatively unknown coach named Phil Jackson.

Let’s look at the facts; Jordan had one of the best side-kicks in NBA history in Pippen, who is a Top 50 all-time player and often referred to as one of the best defenders to ever play the game. He had arguably the best coach of all time in Phil Jackson who was the perfect fit as a Zen Master with his ability to coach each player to their full potential and whose laid-back personality was the perfect fit to Jordan’s fiery demeanor.

Oh yeah, and the Bulls added one of the greatest shooters in NBA history in 1993, Steve Kerr. But why stop there? In 1995, they added Dennis Rodman, who is referred to by most as the best rebounder in NBA history.

So let’s step back and look at it; Jordan now had the best side-kick, the best coach, the best shooter, and the best rebounder arguably ever to play the game. Not bad. Someone needs to give the often perceived villain Jerry Krause some more credit here for compiling the greatest team in NBA history. 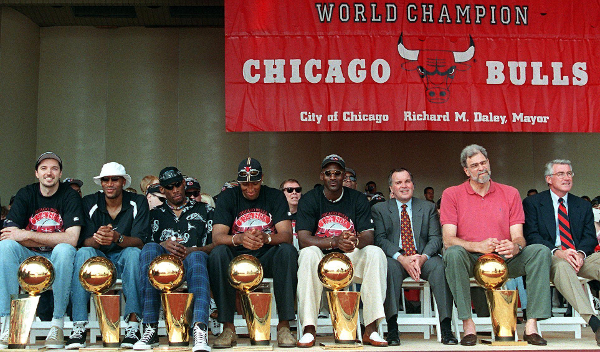 If I haven’t convinced you yet that Jordan isn’t an untouchable mythical figure when it comes to being the greatest ever, let’s take a deeper look at some interesting numbers that stick out to prove my point.

Players are often valued on wins by replacement. This means if someone were to take their place, how well would the team function with another player filling their void. Well, let’s take a look at MJ’s scenario. So Jordan left the game in 1993 after his third title expressing a desire to play baseball.

Sure, the Bulls were a lot worse after Jordan retired for the second time in 1999. But it also was a mass exodus of Pippen, Jackson, Kerr, and Rodman. I don’t think the Cavs were affected much by the loss of Jamario Moon after the 2009-10 season. 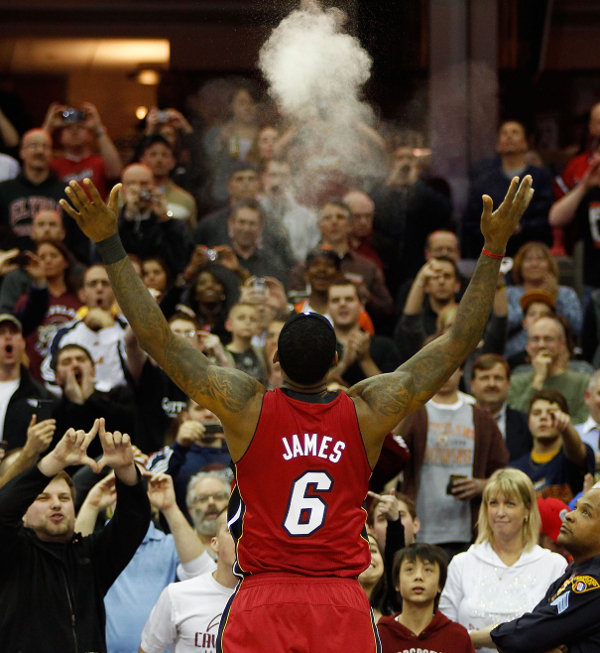 Once again, in no way, shape, or form, am I saying that MJ wasn’t a great player. He’s on everyone’s Mount Rushmore. But the notion that he is the greatest ever and will always be no matter what is one that lacks logical substance. Jordan has been created by Nike and the NBA as an untouchable Greek god and even questioning his supreme omniscience is certified blasphemy.

ESPN journalist Wright Thompson had a great piece last year about MJ’s inability to give up the game and enjoy his accomplishments. I thought it was very interesting to read that Jordan nitpicks and calls out the skill set of threats to his throne – “LeBron can’t go left.” And going even further to make the statement that he could beat him in one-on-one. It’s not that he couldn’t, but comments like that reek of insecurity.

So whether you are an MJ religion-worshiper or not, I just ask you to keep an open mind to the idea that hey, MJ had flaws, he’s not a mythical figure that can never be touched.

As great as Jordan is, there’s no denying the fact that his airness is the benefactor of perfect circumstances, ideal timing, and taking advantage of the opportunity presented by Nike. Oh and by the way, to set the record straight, he pushed off on Byron Russell.