Pooh Jeter: "I just hope for a peaceful resolution in Ukraine"

Pooh Jeter: "I just hope for a peaceful resolution in Ukraine" 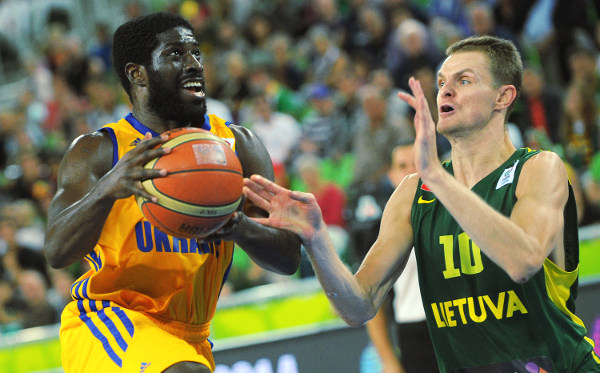 How was your second season in China?

Pooh Jeter: This year, we started off well until I had an ankle sprain. It took me some time to get better. But then once I got fully healthy we finished so well. Last year we fought for the championship because we had Jackson Vroman and Zaid Abbas. This year we were allowed to have only two foreigners – me and Donnell Harvey. Just me being down for that time and playing on a bad ankle, we couldn't make the playoffs.

PJ: Getting better, just rehabbing. One my friends, Courtney from Courtney's Corner, she's treating the ankle right. Monday, Wednesday and Friday, I'm able to hit the court and make sure I stay in shape. I actually worked out with Baron Davis the other day. He showed up and worked out with him. BD is like my brother. I was able to see his movements, just taunting him about if he's serious or not [on his attempt to come back to the NBA]. But his movements are looking pretty solid. He's just got to continue to get in better shape. I think he's going to do it. I think he's going to try and eventually come back.

So he still got it?

PJ: Yeah, he's just got to work on his shape, that's really it. He's still has his moves and I liked the progress that I see. I haven't seen him play in so long, and I liked it. I think he's gonna make that comeback.

Do you feel optimistic that you're going to play again this season? Would you only play in the NBA this season?

PJ: The thing is I came home from the Eurobasket in late September and I had to be in China like in a week in October, so I've been training and training and playing. Then I got a call early from Panathinaikos, like they wanted me to just leave China and go straight to Greece. But in doing that, I wouldn't have no rest this season at all. I would play in Europe with this little ankle problem till the end of the season, then come back home in June, then train for the World Cup, and after that I would be back in China. My body  would be tired. I would have no rest so that's why I didn't do the European situation.

After this bit of rest, my ankle is a whole lot better. I'd rather get a 10-day contract than really go to Europe and play. It's the NBA. I've been dreaming about the NBA since I was a kid and once I had that opportunity I had the lockout situation… If the NBA opportunity comes up, nobody turns down that opportunity.

Have you heard from teams?

PJ: My agent Andre Buck is telling me teams now, there's definitely teams interested. I can't tell you names. But I don't want to get too excited about it until I know for sure. I just worry about today. If the opportunity comes, I would jump on it.

I wanted to ask you about Isaiah Thomas. How do you feel about a guy who's playing for your former NBA team, the Sacramento Kings, that's so similar to you and is experiencing so much success?

PJ: Oh man, I'm extremely happy for Isaiah. I'm real good friends with Tre Simmons and I went two straight summers to Seattle. There I met Isaiah and I've been a fan of him ever since he played in Washington. He's averaging 20 points and six assists in the NBA. That's a blessing! All he needed was an opportunity. I don't know if Paul Westphal, who's a great coach, would have given him that opportunity. Then came Keith Smart, who saw how good he was and gave him that chance. In the NBA all you need is an opportunity to get minutes. I tell Bobby Brown about this all the time: It's all about timing. As for Isaiah, people may think I'd be mad because he came right after me… For what? I'm not going to be mad at Jimmer [Fredette] or Isaiah. I'm happy for him.

Are you following the events in Ukraine?

PJ: Oh yeah. My teammates and coaches with Ukraine, we all talk about it. I just pray for them. I just hope they continue to be safe. I hope they come to an agreement. It's crazy how things work. Since I have a citizenship and I'm part of the Ukraine situation, I've got to fight with them. You know, I have to support them and make sure all my brothers and everybody that I know in Kiev is safe. I played there my first year in Europe so I have a strong connection with everybody in the city. Hopefully everything is better by the time we start training camp. I don't know if we will have training camp there. We will play the World Championship for the first time, the following year we will host the Eurobasket… I just hope for a peaceful resolution.

Were you aware about this situation, about this divide in Ukraine between the Russian-speaking people and the rest of the country?

PJ: I had no clue until I saw it on the news and read about it. Then I was asking people what's going on and then they told me. With individuals like Sasha Volvov and the other people at the Ukraine Basketball Federation, I know everything will work out [basketball-wise]. I just hope nobody dies anymore because of this situation.

I've been in touch with coach Mike Fratello and my teammates and they keep me updated. Also my friends in Kiev. I care because I'm part of them now. It's not like I took advantage of an opportunity and then I leave it alone… I have friendships with this people and I speak with them all the time. Once you join a team, you gotta ride with your team.

So you're a lock to play the World Championship with Ukraine.

PJ: I believe so, if the Lord wills it. Last summer I almost didn't do it. But at the end I went there, learned from Fratello and it worked out and we did something special.