Why is Blake Griffin so much better now?

Why is Blake Griffin so much better now? 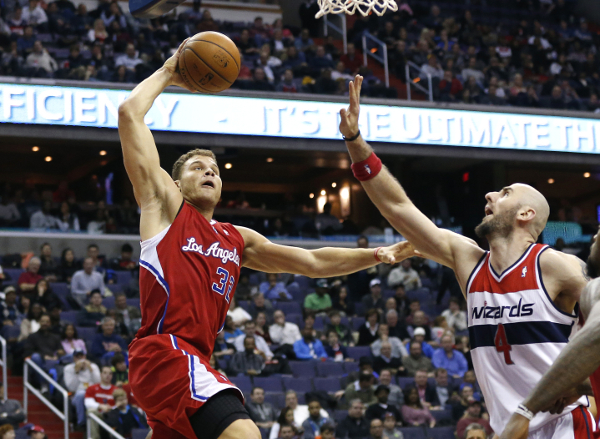 Welcome to the evening of February 19th, 2011. The location: Staples Center, Los Angeles. The event: The NBA Slam Dunk Contest. Blake Griffin stands at mid-court hoisting the trophy over his head in front of the L.A. faithful.

Less than half an hour before, Griffin effortlessly jumped over a silver Kia en route to unanimously winning the crown of the NBA’s best dunker. And along with it came the official stamp of judgment on Griffin’s game – human highlight. Nothing more, nothing less. To a certain extent, it was a fair assessment. Instead of Griffin’s thunderous dunks casting a shadow over his deficiencies in his game, they instead served as a spotlight opening up constant criticism.

Now let’s fast forward to February 9th, 2014. Chris Paul has returned from his shoulder injury after missing 19 games. And what happened in those 19 games? Blake Griffin re-introduced himself to the world, but this time not only as a freak athlete but also as a superstar and a legitimate MVP candidate.

Griffin’s evolution didn’t happen only in those 19 games carrying the weight of the Clippers on his back, it was the icing on the cake of continued commitment and dedication of countless hours of work to become a Top 5 player in the NBA. How exactly did Blake make this transformation? Well, that’s exactly what I’m here to show you. Let’s take a deeper look.

HOW BLAKE GRIFFIN BECAME A SUPERSTAR

1. The development of a consistent jumper

For all the naysayers out there who attest that players can’t develop their skill set once they’re in the NBA like they could in college, I show you exhibit A: Blake Griffin. Griffin came into the league as a liability from anywhere outside of the paint and, quite frankly, from anything other than tomahawking on defenders. Although he still has that in his arsenal, he has expanded his game by developing a consistent mid-range jump shot and even extended his range to be a viable threat from three when left open.

In Griffin’s first two years in the league, more than 67 percent of all his shot attempts were within three feet of the hoop. This year, that number has dropped all the way down below 60 percent. He has proportioned his shot selection to 43 percent of his attempts coming from outside the paint and knocking down a mid-range 15-18 foot jumper at a clip of slightly over 40 percent.

Now I know that’s not setting the world on fire, but from where he came from it’s like comparing Steve Urkel’s swag on Family Matters to Will Smith’s on Fresh Prince of Bel-Air. Griffin ranks 17th overall in the NBA with a very efficient field goal percentage of 53 percent and third in the league in field goals made, ranking him ahead of LeBron James. Griffin’s points per possession of 1.42 and his PER of 23.9 are both Top 10 in the league.

People love to compare stars today to the stars of the past and most comparisons are disrespectful to the legend. Harold Minor the next Michael Jordan? Yeah, how’d that pan out? But in Griffin’s case, with a developed mid-range jump shot and the way he is currently playing, comparing him to Karl Malone is not a stretch at all.

There is a lot to be said for basketball IQ. It is a term that gets tossed around a lot and never really dissected. Most otherworldly athletes like Griffin lack basketball IQ due to the fact that they don’t necessarily need it since they can rely on their athleticism. Exactly how the old Blake Griffin used to be. But not Blake Griffin 2.0.

Griffin’s ability to read situations and make the smart play has never been more apparent as he continues to develop a guard’s feel for the game. Griffin ranks second among non-guards in secondary assists (a stat that gauges a player’s ability to see a play develop two passes ahead). He ranks fifth among non-guards in points created by assist per game at 8.7 points per game.

To put in perspective of how much of a smarter and more willing passer Griffin has become, he averages only 0.2 passes less than Kyrie Irving per game and only slightly trails Irving in assists-turnovers per game. Not only does Griffin’s passing ability show his increased basketball IQ, but also his increased knowledge and ability to move without the ball. With Griffin on the move cutting to the basket, he is finishing at a rate of 1.22 points per possession. Not only does his ability to move without the ball make him harder to defend, but it also creates open looks for threes for his teammates.

I give a lot of credit for being a student of the game and developing a high basketball IQ. I also give a great deal of credit to a good friend of mine, Clippers GM Gary Sacks. He saw this in Griffin’s development as a high IQ player when everyone else only saw him as a dunker. Big props to Sacks for reviving the Clippers and taking an upper hand over the Lakers in “Battleground L.A.”

When a player improves his jump shot, most fans are able to take notice of this improved skill set as it’s easy to track and relatively blatant to see. However, when a player improves their back-to-the-basket post game, it’s not as easily detectable to the untrained eye. The ‘Blake Griffin has no offensive game and can only dunk’ theorists have no choice other than to be silenced after dissecting Griffin’s post game.

When Clipper team leader Chris Paul went down for 19 games, most thought it would expose Griffin’s perceived ‘lack of a post game.’ Instead, just the opposite happened. Instead of averaging his normal 3.9 post-up shot attempts per game, Griffin averaged slightly under 6 per game. Griffin shot 48 percent from the block during that stretch ranking him in the top 82 percent of the NBA. That puts him ahead of low-post aficionados Al Jefferson and Kevin Love. 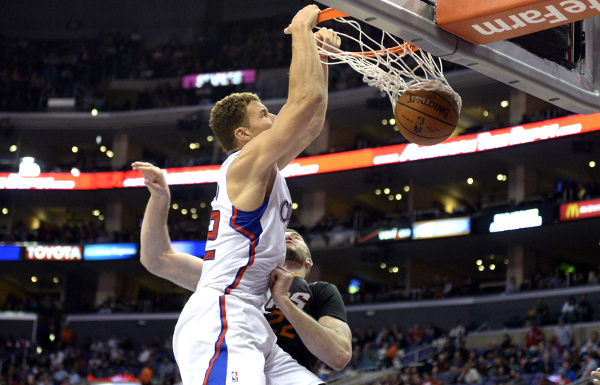 Even more impressive was the 1.03 points per possession the Clippers averaged when Blake touched the ball in the low post. And 26 percent of Griffin’s post-up situations resulted in him drawing a foul, which is the highest rate in the league. This signals that defenders realize they are at a disadvantage once Griffin gets position and would rather put him on the line than let him do damage in the post.

Maybe in the past that was a good idea, but not anymore as Griffin has also improved his free-throw efficiency shooting to 71 percent. Saying Blake Griffin has no post game is like saying life was better without cell phones. The argument comes from people who are stuck in the past and don’t see the improved change.

Normally, I don’t congratulate and encourage increased isolation ability improvement. Yes, it’s a great skill to have especially in the NBA, but normally the increased ability to play in isolation situations goes hand and hand with more ball-stopping iso attempts. This in turn kills offensive flow if used in the wrong way. Just as the Knicks.

However, Blake Griffin is in a different boat than most isolation elites. The key is knowing when the situation is right and ideal for the team as a whole to isolate. Griffin’s basketball IQ allows him to pick and choose opportune times to isolate.

The majority of Griffin’s iso situations, 48.5 percent, result in him attacking the hoop on the drive or pulling up for a jumper. In these situations, Griffin is averaging a scorching 1.136 points per possession, which ranks him in the top 95 percent of the league. But what is even more valuable is Griffin’s efficiency when the shot clock is under 4 seconds, converting at a clip of nearly 43 percent, which puts him in the top 80 percent of the NBA.

Not only has Griffin increased his ability to isolate and finish on his own, he also is one of the most underrated passers in the league. When Griffin drives and kicks the Clippers are averaging 1.429 points per possession. That is a ridiculous number. That means if every possession in a Clippers game was a Blake Griffin drive and kick, the Clippers would be averaging 142.9 points per game. So if anyone ever tells you, “Blake Griffin can only dunk.” Please just calmly walk away as some arguments are too ridiculous to even have.

There’s nothing that I like more when I’m watching SportsCenter than to see Blake Griffin and Chris Paul run the pick-and-roll with Griffin rolling hard to the rim, Paul gift-wrapping the delivery, and then BG finishing at the rim as if the hoop just hit on his younger sister. Needless to say, SportsCenter likes this too, as there is normally at least one of these scenarios on each evening.

In the past, Griffin’s clockwork roll to the hoop off the pick-and-roll would only open up shooters on the wings as defenders had to shrink in to take Griffin’s roll and finish away. Don’t get me wrong, that’s great. And Griffin continues to roll to the hoops and finish at a high level, which is even more effective this year now that the Clippers have legitimate shooters on the wings. 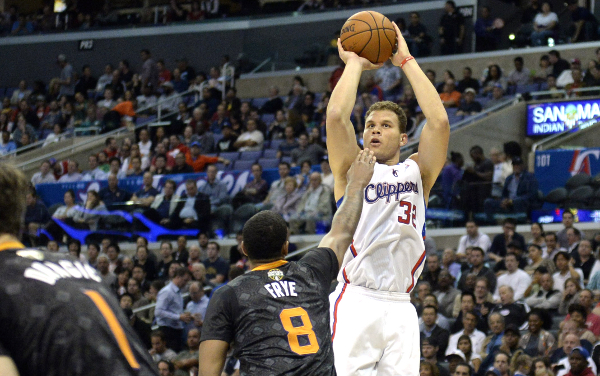 However, Griffin’s new found effectiveness in the pick-and-pop opens up an entire new world for Chris Paul when he attacks of the ball-screen. Think of it like this, your girlfriend was always great at giving back massages, but now she is also a gourmet level cook.

That is what CP3 is feeling with Griffin able to stretch defenses with his pick-and-pop ability, which opens up more lanes for Paul to create and distribute. It’s becoming increasingly hard for teams to double and trap Paul in the ball screen because Griffin makess them pay knocking down the pick-and-pop jumper.

Griffin’s intense training in the offseason on daunting sand dunes in the Bay Area has been well documented, but what is never highly publicized is his commitment to increasing his body control and turning his weaknesses into strengths. A lot of credit goes to his personal trainer Robbie Davis and Clippers shooting coach Bob Thate.

But it’s Griffin’s awareness and dedication to continued highlighting of his strengths and transforming liabilities into assets that sets him apart and has taken him from a dunking poster-picture to a legitimate MVP candidate. If not for two players named LeBron James and Kevin Durant, Griffin would be hoisting the hardware at the end of the season. Griffin’s great improvement should serve as a testament to young players throughout the league; no matter what you come in perceived to be, you can always transform yourself into what you need to be.

If Griffin continues to improve at this rate, every player in the league is going to start eating Subway for pre-game meal while arriving to the arena in their Kia’s. And, I’ll be honest, if Griffin is in anymore commercials I’m going to have to stop watching TV all together. My Vizio TV that is. 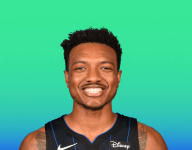