Oklahoma City is most-at-risk contender in the first round

Oklahoma City is most-at-risk contender in the first round 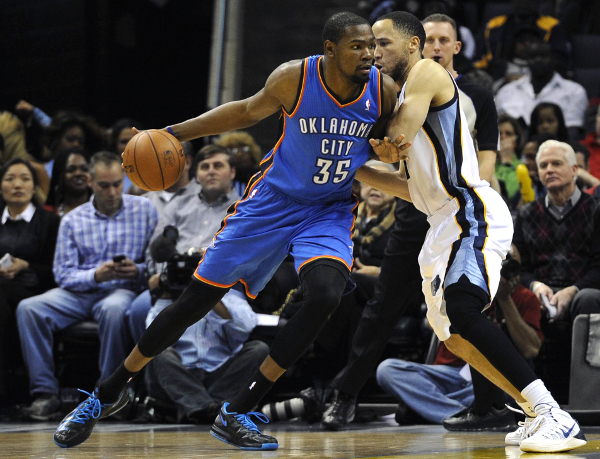 Which one of the five teams that are legitimate championship contenders is the most likely to be eliminated in the first round of the money season?

Not Miami, which despite a late-season nosedive will still be barely challenged by Charlotte. Ditto for Indiana in its faceoff with Atlanta. Also, San Antonio has too much talent, depth, experience, motivation, and savvy to be upended by Dallas. With Andrew Bogut out of action for the duration, the LA Clippers should have minimal trouble in dispatching Golden State.

That leaves the Oklahoma City-Memphis series as the one matchup most likely to result in an early upset.

In general, the series features OKC’s speed and quickness against the Grizzlies’ size and power. Let’s take a closer look at the most critical man-to-man battles.

Of course the most significant of these will be the confrontation between Kevin Durant and Tayshaun Prince. The only tactic that can in any slight way hinder the explosive point-making of KD is to be extremely physical with him. Although the refs allow much more banging and shoving in the playoffs, even in his halcyon days Prince was a long-armed, quick-footed defender who relied more on finesse than muscle.

Accordingly, look for Durant to register another string of 40-plus outings. At the other end of the court, Prince will not a mount a serious challenge to TD’s improving, but still merely adequate defensive capabilities. 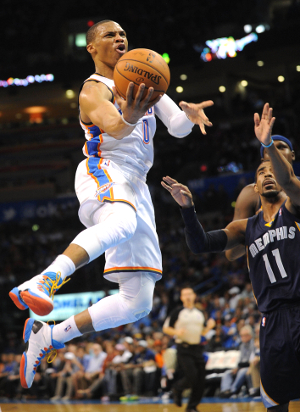 Russell Westbrook is OKC’s secondary offensive threat. He’s quicker than a wish, a daring penetrator, and a streak shooter. But Mike Conley’s defense is ornery and the Grizzlies’ team defense will take full advantage of Westbrook’s penchant for making bad decisions with the ball. So, too, will Conley’s vastly improved offensive skills present a formidable challenge for Westbrook.

If this matchup even comes close to being a wash (which is entirely possible), then the Thunder will be in trouble.

At the shooting-guard position, the combination of Andre Roberson and Thabo Sefolosha versus Courtney Lee will have minimal impact whichever way the needle moves.

But it’s up-front where the Grizzlies’ have the most lopsided advantage.

Serge Ibaka is quick to help on defense and has become a reliable mid-range shooter. But Zach Randolph has the power, the mass, the moves, and the shooting range to trump Ibaka’s overrated man-to-man defense. Nick Collison will present a scrappier, more physical presence, but Randolph can take advantage of his propensity for being in constant foul trouble.

Since Randolph is not a very accomplished passer (although he’s much better than he once was), he will have to be double-teamed on a regular basis. 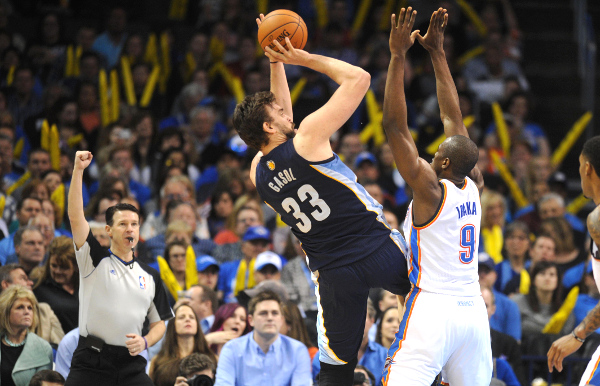 In the middle, Marc Gasol is perhaps the best passing center in the league – so two-timing him would be costly. Gasol’s game plan is to score only when he must – with a reliable mid-range jumper as well as slow-developing but powerful moves in the low post. It’s hard to imagine Steven Adams, Ibaka, or Collison offering much resistance if/when Memphis asks Gasol to score.

Kendrick Perkins is an above-average post-defender, but his presence dramatically slows down OKC’s up-tempo offense. Plus, even more than Collison, Perkins can’t play defense without fouling.

The Thunder can bring a host of scorers off the bench – the dynamic Reggie Jackson, along with the erratic talents of Jeremy Lamb and Caron Butler. The Grizzlies can counter with Tony Allen, an ace defender; and Mike Miller, a defenseless, lead-footer three-point specialist.

Still, since starters are expected to play more minutes than they did during the regular season, the Grizzlies’ short bench may not be much of a detriment.

The Thunder will triumph if they can establish and maintain their accustomed quick-hitting offense. They want to run, run, and keep on running. Yet, despite their elite status, OKC might be among the NBA’s worst passing teams – a flaw that the excellent Memphis defense will turn into easy scores.

Still, the Grizzlies’ best chance to advance into the second round is to slow the game down. Be patient and deliberate of offense. Turn the proceedings into a half-court grind-it-out affair.

Fortunately for Memphis, the comparative laissez-faire attitude of the refs, coupled with the increasing familiarity of each opponent’s game plan, makes for the slowdown pace that characterizes most playoff series.

Whoever wins, don’t be surprised if this series goes seven games. 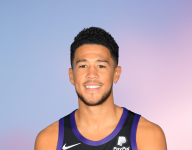