CJ Fair: "I've got a great feeling about getting picked in the first round"

CJ Fair: "I've got a great feeling about getting picked in the first round" 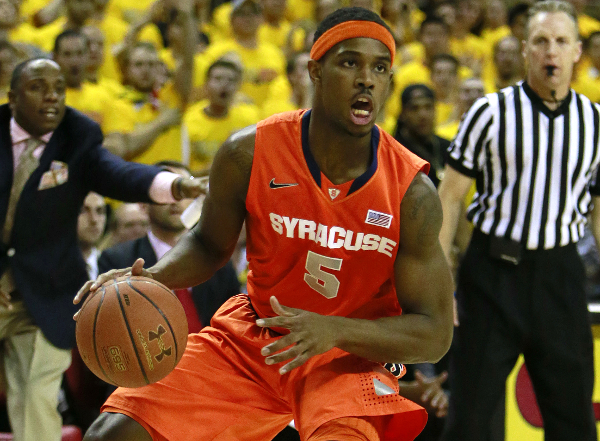 When the season ended, before all the NBA workouts began, you worked out in Houston for about three weeks with former player and coach John Lucas.

CJ Fair: Yeah I've been working out with coach Lucas and he's been great for me. I've been competing hard, working hard defensively, and taught me a lot of things in order to prepare for the NBA.

How are the workouts going?

CJF: It's all good. I've been going against some good guys, and I've been getting a lot of good feedback from teams.

What have they told you?

CJF: I know that a few teams said that if I'm available they will definitely will take into consideration taking me. I've hearing it from like three teams, so it's always good to hear that.

How many more do you have left? I've read that at the end you will have worked out for approximately 14 NBA teams.

CJF: Yeah, around that number. I had a workout with the Spurs last Tuesday and it went really well as well. I like to attend workouts where I know there are other guys that have a lot of hype, that they are considered top guys. I want to compete against them and show that I should be up high as well.

During the interviews, which question that teams asked you surprised you the most?

CJF: Interviews went good too. I'm not a player that gets into trouble on or off the court so questions were about things about the game, how to play in certain situations, things like that, so there were no big surprises there.

Last Wednesday I think you were in Chicago working out for the Bulls, and you ran into a familiar foe, Duke's Rodney Hood. Everybody remembers coach Boeheim going nuts and getting ejected after that controversial charge call. How did it go?

CJF: The workout went well, we got the chance to compete against each other. I was shooting the ball well and doing good defensively so it was really a good workout.

Did you guys talk about that particular game, some jokes maybe?

CJF: Yeah, we made some jokes and stuff. It was cool to see Rodney and work out against him. It would be great to go against each other in the NBA next time.

Has Jim Boeheim given you some advice before facing the whole draft process?

CJF: Yeah, he talked to me before all these workouts. He told me that I should not try to do too much, just be myself on the court, and other things, little details to take into account during the workouts and the interviews.

Which current NBA players do you watch in terms of learning their moves, their skills?

CJF: I like to watch Melo a lot, how he plays in the mid-range area. Also I look at Kevin Durant a lot, the way he shoots the ball.

What are you aiming for in this draft?

CJF: My goal is to be a first-round pick, and I've got a good feeling for that. But you don't know, you might not get picked at all, you just never know. But I've got a great feeling about getting picked in the first round.

Lucas sees potential for you to play multiple positions in the NBA. You've said you think you can play the two or the three spot. But at first, where do you see yourself as a pro?

CJF: I think my natural position is the small forward spot, playing the three, but I can become an elite defender and take the two-guard position, and also play as a power forward if a team goes small.

This season with Syracuse you clearly became the go-to scorer. Tyler Ennis told Dime Magazine that they can always count on you to make plays at the end of the game. Do you feel that your ability to deliver when the game is on the line is a big asset for you when it comes to the NBA?

CJF: I'm a competitor and I like to push myself on both sides of the court. Sometimes teams might not need you to be the go-to guy, maybe they need you to take the open shot and just guard hard, then that's what I would do. As my role gets bigger that's when I'll be able to do more things. I always take pride in being consistent, to produce at a high level.

Two of your Syracuse teammates have entered the draft too: Tyler Ennis and Jerami Grant. Are you in touch with them? Do you speak often to each other?

Ennis and Grant, they are both first-round picks right now on our latest mock draft. Where do you think they will end up being chosen?

CJF: I think all three will get picked in the first round. It would be cool if we got picked like back-to-back, stuff like that. We all three got each other's back.