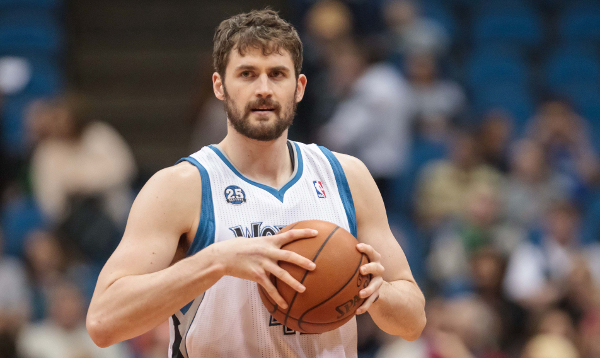 Kevin Love is looking for broader pastures and just like players before him – LeBron James, Carmelo Anthony, Chris Bosh or Dwight Howard – it is not a fun process. Once you decide that you will opt out of your contract, the media will immediately react to every statement, trip you may take or friendship you develop.

Love has obviously handled things differently so far. But like those mentioned above, the hard times are just ahead if he is in a Timberwolves uniform to start the season. Love should learn from the mistakes of others and not hem and haw about what he wants to do. Just say it now and move on. Free agents will not think about signing if they know he is leaving and obviously the Timberwolves will draft differently as well.

It's obvious Love wants to win and now it's the Timberwolves' job to figure out how to convince him to do it in Minnesota.

His head is cluttered with a lot of disappointments and failures playing for an organization that wants to keep him. Now the key is how these thoughts can be eliminated after six years and start anew.

Let's jump in the mind of Kevin Love for a minute. Now hold up before you jump in because it's complicated. There is a lot of stuff in there and it might be difficult to move around.

The first obstacle is the fact that he is finding the NBA playoffs extremely difficult to watch. Why? Well, he might as well be trying to learn Mandarin because the playoffs are a foreign entity to him. Love has played in the NBA six years and has never been a playoff performer.

Love is one of seven players in the first round of the 2008 draft that have not to play in an NBA playoff game. (The others are Eric Gordon, Joe Alexander, Jason Thompson, Alexis Ajinca, Donte Greene and JR Giddens).

The four players ahead of him in the draft – Derrick Rose, Michael Beasley, OJ Mayo and Russell Westbrook – have all experienced the opportunity to not only make the playoffs, but go deep into them.

Westbrook is especially haunting him because he is a close friend and college teammate at UCLA and has consistently enjoyed deep runs into the second season.

The second obstacle is the three trips he has made to the All-Star game. It can't be enjoyable in the locker room when players are sitting around bantering about past playoff experiences.

Can you imagine how quiet he is sitting amongst fellow stars as they reminisce or look forward to the upcoming playoffs?

I know it had to be embarrassing traveling and playing during the Olympics amongst players who have won championships or who are playing for teams with a chance.

The third obstacle is his team and the players who surround him. I am sure he is questioning himself on the fact that these guys will not help him achieve his goal to get to the second season. Love knows that he needs help in the form of veteran basketball players and most importantly All-Stars like him, but is it possible? Minnesota is not a free agent destination for stars and history has proven that fact. So improving through the draft seems to be the only course.

Love has recognized he can't do it alone although he's putting up video game numbers on a nightly basis.

He is becoming convinced it will not ever be enough. After six years, his career could be halfway over and that is a scary thought.

Kevin Martin and Ricky Rubio is his answer to Russell Westbrook and Serge Ibaka for Kevin Durant, Dwyane Wade and Chris Bosh for LeBron James, Roy Hibbert and David West for Paul George, Blake Griffin and DeAndre Jordan for Chris Paul and Tony Parker and Manu Ginobili for Tim Duncan.

He is saying to himself Ricky can't shoot outside of two feet and Martin is one-dimensional at best.

I believe Love has finally realized he needs help. That is why the Minnesota Timberwolves should start finding suitors because he is going to leave. The writing is on the wall.

He will not go to a team and decimate their roster because he wants to win, so it's important to start the process now.

This young man is battling some serious pride issues. I predict that he will be playing in another uniform next season and that team will finally allow Love to venture into the NBA playoffs.