Heat: What went wrong and how they can fix it

Heat: What went wrong and how they can fix it 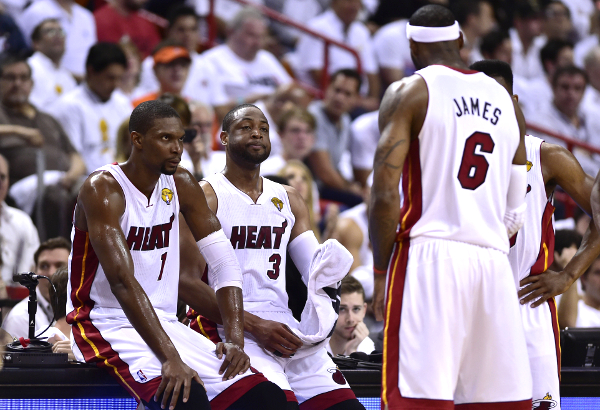 Let us begin with the great unspoken truth about the Miami Heat over these last four years – they have done nothing to their roster.

Obviously, they did quite a bit in the summer of 2010. They re-signed half the team, traded for LeBron James and Chris Bosh, and painstakingly crafted all of the other ludicrously well-documented cap wrangling to create the Big Three and add some role players. And yet in the time hence, they have added very, very few impact players.

Since then, the most impactful players they have signed have been Shane Battier, Ray Allen and Chris Andersen. They signed veteran role players to play veteran roles, and it briefly worked. But those veteran players, specifically Battier and Andersen, ran out of gas. More worryingly, Dwyane Wade ran out of gas too. And with them went Miami into what might be a terminal decline.

In these past four years, the Heat have had only one first-round pick, Norris Cole, who is frankly one of the most overrated role players of a generation with a career best PER of 8.8. They have garnered nothing with multiple second rounders (the only one they still have, 2012 second rounder Justin Hamilton, they already waived once), and they have almost entirely held off signing young non-drafted players, save for a brief flirtation with Terrel Harris, whom they did their best to convince the fan base was a prodigal young all-around combo guard talent despite him never showing it before or since.

Teams do not have to go young for the sake of going young. But almost universally, young players bring with them a hunger. A change of speed. A dynamicism and a fire, a need to impress and get paid that manifests itself in winning possessions. They bring more mistakes, generally, but such is the trade-off. That is why there must be a balance between youth and experience.

Miami did not have balance. With the obvious exception of LeBron, they looked limp, flummoxed and overmatched. They looked older than the famously long-tenured San Antonio trio. They were run off the court. They looked as though they were not competing even when they were competing because San Antonio got to every spot on the court first. They didn't have the balance of want-to and know-how. They were moribund. They were old. 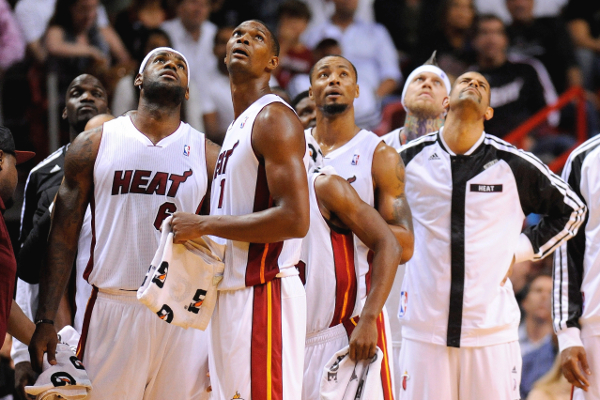 For this, they can look at the superfluousness of the roster. They never needed to have both Rashard Lewis and James Jones, for example – you can never have too much jumpshooting, as San Antonio showed, but you can have too few roster spots and too many specialists. They never needed the much-declined Udonis Haslem, and Lord knows why they gave him a five-year contract at the age of 30 in the first place. They did in theory need Mike Miller, but not at the price they gave him, and the subsequent signing of Allen meant they did not need him at all in the end either.

They never needed Mike Bibby, Juwan Howard, Zydrunas Ilgauskas, Jerry Stackhouse, Eddie House, Erick Dampier, or indeed any other of the veterans whose main virtue lay in 'being veterans'. They never needed Joel Anthony (and Lord knows why they even gave him five years in the first place either), and they never needed the unused Toney Douglas that they got back in trade for Anthony in this season's deadline trade. And yet what they do now need is the first and second round picks they gave away to make that trade happen.

The Heat relied upon retreads and reclamation projects at the bottom of their roster. Perhaps they felt it was a luxury they could afford when you're so stacked at the top, yet it was not a successful strategy. It worked once with Andersen, a player cast free by the Denver Nuggets due to his age, knees, cost and an ugly off-court situation not of his own doing, whose career they resurrected and who was a valuable contributor during the last championship run.

But it did not work with Greg Oden, who played very few minutes and underwhelmed in those that he did, or the unlikely revisit of Michael Beasley, who still needs three plays to make one good one. And nor did it work with Eddy Curry, because, really, how was it ever going to?

Furthermore, they have been a little spendthrift. The narrative is that owner Mickey Arison is so rich that he can, and does, operate the team at whatever cost it takes to be competitive.

Certainly, Miami went into the luxury tax in the past three seasons. Nonetheless, there have been cost-cutting measures – an unused mid-level exception this season, the salary dump of Anthony that cost the team future draft assets (assets that had only been obtained in the first place by trading away, and thus avoiding paying, a 2012 first-round pick), no attempts to use this supposed financial clout in the draft (their one pick acquision, James Ennis, was obtained for a future pick only), and the dumpings of Dexter Pittman and Roger Mason that cost them at least one further draft pick. Miami got old by choice, so age is no excuse for their demise.

The fact that they were still winning when all this was going on did not mean that it was OK for all this to be going on. Miami never looked towards the future at any point during this run. Their one lump sum infusion of talent was so great that they never sought to add any more. They acted as though they did not have to.

When they were winning titles, they might have been right. But the run might be over now. If the future is now, it is not good viewing. There seems to be little available to refuel, to reload, to reignite this downtrodden team. Miami were really good at times this year, but only because LeBron made them so. The rest of the team fell off around him, however, and it is his turn next.

So, from where do the answers come? Everything is reliant upon LeBron, of course, which no one can deny. Beyond him, everything is a question.

Miami are in a very strange position right now whereby they are both staring down the barrel of having (or much less likely choosing) to disband the Big Three, while fully aware of (and said to be exploring) the vague allusions to the possibility of making it a Big Four. The chances of this are very slim and surely getting slimmer as the cold hard truth kicks in. Nevertheless, it speaks to the lure of the franchise as a free agent destintation. They were able to land Allen and Battier on what were at the time sharp discounts because of the lures of the city and the winning.

It is possible that either or both opt out this offseason so as to receive the last big contract of their careers – they will not get paid as much in the next two years as they would if they opted in, but the trade-off of the security of the two or three additional seasons after that would be the lure, just as it so often is in this situations.

Zach Randolph is a candidate to opt out of his contract for the same reasons, and Richard Jefferson once famously opted out of $14 million for one year to take $40 million over four. His decision worked out, and it did not go unnoticed.

Both, however, might be more inclined to opt out next season instead. This is particularly true of Bosh, whom, despite completely disappearing in the Finals, is an irreplaceable part of the team going forward. His status as a faux-star rather misrepresents the fact he is pretty much a role player, but as role players go, he is about as good of one as you can get. Miami needs to keep him around if they are to win again in the LeBron era, and they surely already know it. 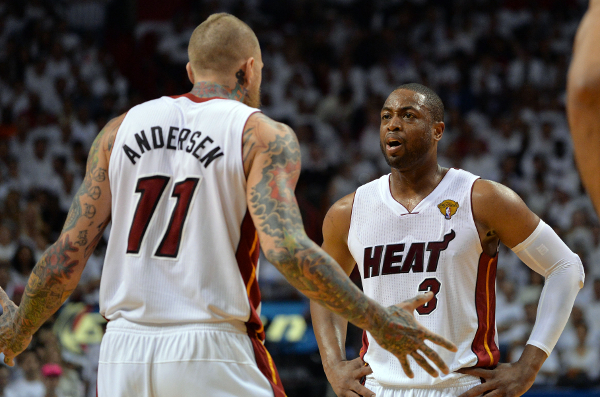 The Wade situation, though, is less clear. He is declining and he is declining rather quickly. He is no longer able to be the game changer he once was, and nor is he able to play three quarters of a season's schedule. As his speed and athleticism disappear, we are starting to see that on pure basketball talents alone, he never was that great of a fit alongside James, the clear-cut alpha dog.

In the full court game, they were born to co-exist, but that game is leaving them now. In the halfcourt, Wade is becoming increasingly awkward – he never could shoot, and hasn't the change of pace to fly to the rim like he once did or cut so sharply off the ball. And defensively, where his decline is even more apparent, Wade is almost a liability, one LeBron no longer has the stamina to cover for.

There are much more than just basketball factors at stake here, however. In the summer of 2010, Wade openly courted the Chicago Bulls – however legitimate his intention of perhaps signing there ever was, he certainly told them it was a possibility, and visited accordingly. But when he passed on their overtures to stay with the team that drafted him, Wade cattishly cited 'loyalty' as a reason for his decision.

'Loyalty' is a driving force behind player's signing decisions. These hulking warriors are really just puppy dogs needing to be loved and Wade publicly decried the Bulls for not showing enough loyalty to their former players, citing as evidence the lack of former players within their front office personnel. The claim was never especially fair to begin with. Nevertheless, Miami embraced it, using the loyalty to convince Wade to be loyal to them and compounding it with further hirings (e.g. Tim Hardaway) to confirm why Wade was right.

Now, with Wade's decay, comes a real test of loyalty. Every championship the franchise has ever won, every success they have ever had, he brought them. Yet he now seems to no longer be capable of bringing them more. Are they going to let him leave, to be disloyal (perceived or otherwise), because they are not getting enough from him anymore? He has always tried his best, as a player and a recruiter – are there any circumstances at all by which they can possibly let him leave?

If they have to overpay for his future services in recognition of his past ones, is it worth it? Can they do a Kobe with Wade? Can they afford not to? They lose a lot if they clog up salary for diminishing returns, but do they lose even more if they reject the concept of loyalty they had previously dined out on?

Miami has to keep Wade, then, and they might have to keep him at a cost ill-fitting of his abilities. Arison or not, there is a spending limit, and this will smart. To get around it, then, they need to change tactics. They need to get younger, hungrier, faster. With prudent scouting, a change in roster management philosophy and a blank chequebook, Miami's championship window is not shut. But there is a lot more to do than four consecutive NBA Finals would suggest.