Who is Carmelo Anthony?

Who is Carmelo Anthony? 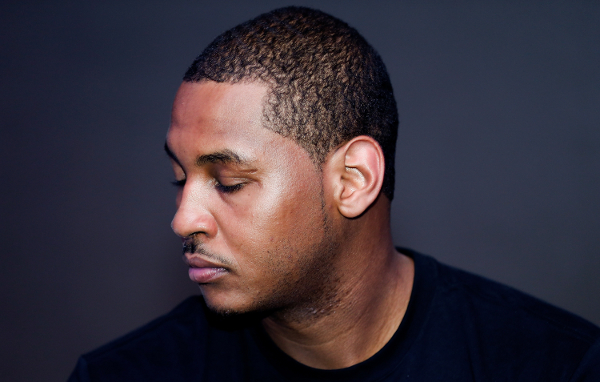 Is he an all-for-me, money-hungry limelighter who can only play when the ball in his hands, a bigger version of Iverson and doomed to never win a championship?

Or is he a basketball savant, ultra-talented scorer that is willing to do anything to win a ring, just waiting to shed his public me-first persona and show everyone who Carmelo Anthony truly is?

If 12 years in the league hasn’t shown his true colors, these next few weeks will definitely do so.

Whether Melo is in it to create a legacy as just another great scorer or whether he is in it to prove that he truly is a champion, one thing is certain; a decision made by Anthony has potential to send shockwaves through the NBA landscape on par to the Summer of the Big Three. But first, Melo has to has to ask himself the question, “Who is Carmelo Anthony?”

Another brisk winter day and another 45-minute commute from school in the books. But this commute was different, this commute made every other 45-minute ride to and from school feel like it wasn’t worth it anymore. Bold in his mind rang five words – cut from the varsity team. How could it be? He loved the game, lived and breathed basketball. And now to be cut, that just couldn’t happen. Sound like a familiar story?

In the world of social media that we live in, public perception can paint a positive picture for an athlete that leads to the love of an entire nation. However, it can also create a force field of judgment, fair or not, that leads to nationwide scorn. And there is nothing more difficult than changing the opinion of the masses.

Case in point, LeBron James. He has done almost everything correct in the past four years but is still held hostage by the infamous Decision. Carmelo Anthony is a passenger on the same boat. And the motivation to prove people wrong from the day he was cut from his high school team is the same chip on his shoulder that will drive him to prove to the basketball world wrong and prove that Carmelo Anthony is a champion. Let the journey begin.

THE TRUTH ABOUT CARMELO ANTHONY'S GAME?

Carmelo Anthony can score. Period. That’s obvious, the 2013 NBA scoring champion can fill it up from anywhere with the best that have played the game. Often called the best pure scorer in the game today, Melo knows how to get buckets and sure isn’t shy about doing so. Career-high 62 in The Garden vs. Charlotte this season, Team USA Olympic record 37 points in a 2012 drubbing of Nigeria, and the list goes on..

What is also just as obvious in the public perception is that MelO is spelled with a capital ‘O’ and no ‘D’ anywhere to be found. If that weren’t bad enough, already known as a one-way player, Melo is also known for being an offense killer isolation act, need-the-ball-his-hands type of player.

Just ask ESPN Radio's Colin Cowherd his opinion on Melo, “It doesn’t matter where he goes, it’s a you problem. He can’t run from who he is, he’s a ballhog.” 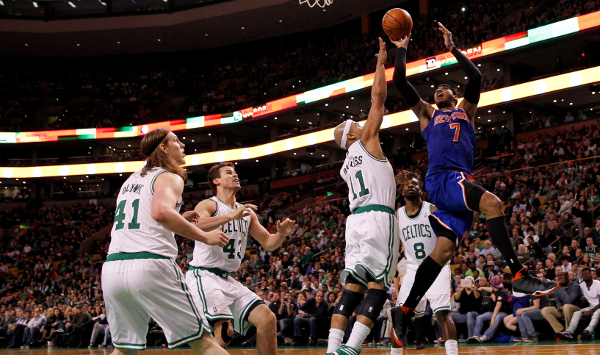 Look at when the Knicks played the most efficient basketball – 2012 during the Linsanity run while Melo was inactive. Many of these claims and perceptions do hold weight, however they do not tell the entire story. In the search for the true Carmelo Anthony, we must search deeper.

Yes, Carmelo Anthony is a high-volume scorer. And you already know how I feel about high-volume scorers. I hold them in the same regards as a trip to the dentist’s office. Melo averaged a league high 21.3 shot attempts this season, nearly four more attempts per game than LeBron and nine more attempts than the next highest New York Knick. On the surface, this number is far too high.

To become a player who everyone wants to play with, 21.3 shots per game is going to be an extreme red flag to any potential free agent. How many times have you heard a free agent say, “I’m willing to take less to go to New York and play with Carmelo?” Never.

But is it justified? Is Carmelo Anthony’s high-volume shooting product of the system and the environment that he’s in? Melo’s usage rate (30.1) is Top 5 in the NBA while keeping his player efficiency rating (24.5) higher than that of NBA public perception darlings Stephen Curry and Blake Griffin.

Although his field-goal percentage isn’t as high as the King's, at 45.2 percent it rates higher than the public’s next superstars Paul George and Kyrie Irving. And in a league that is becoming more and more reliant on the three, Melo shot it at a clip of 40.2 percent, higher than that of perceived three-point shooting extraordinaires Kevin Durant and Kevin Love.

Of the nine most prevalent recorded scoring situations recorded by Synergy Film (iso, post-up, spot-up, pick-and-roll, primary ball handler, transition, put backs, off screen, and cuts), Carmelo had a points per possession rate of greater than 1.0 in all but two of the categories. Anytime a player’s points per possession is more than 1.0, that indicates efficient. One of the two categories that Melo doesn’t have over a 1.0 – isolation. Ironic, as that is the one perceived aspect that Melo shines in.

WHERE DOES HE NEED TO IMPROVE

As good as Carmelo Anthony is offensively, he needs to become a full-fledged two-way player. This is the main stigma that Melo carries around with him; no defense.

Whether it is lack of desire or the weight of carrying the entire offense on his shoulders, Melo must make it a top priority to become an elite defender. There is no doubt that he can be if he wants to be. With his frame, he has the ability to guard power forwards in the post where he has actually been the most effective.

In post-up situations, Melo is holding opponents to a 0.593 points per possession ranking him in the top 95 percent of the league, which puts him ahead of 7-foot-2 Roy Hibbert (which might not be saying much after the 2014 playoffs). Where Carmelo has lacked defensively isn’t when he is matched up in isolation situations (he’s been very effective holding opponents to 28.6 percent shooting).

Instead, his glaring weakness is in the main offensive player movement situations – off screen and pick-and-roll scenarios. In off screen situations, Melo is allowing his opponent to shoot an adjusted fg% of 56.3 percent and when involved in pick-and-roll situations his defensive points per possession is at a clip of 1.06, far too high for any high-level defender.

These analytical stats scream loud and clear that Melo’s problems defensively are in his head and not his ability. In the NBA, any lapse of concentration in a defensive player will lead to a team defensive breakdown and ultimately an open look. When Melo is man up with his opponent, he is very effective in creating stops.

However, it is Melo’s defensive commitment and complete focus in secondary defensive situations away from the ball that needs to improve to transform the perception of Mel-O.

One decision made by Carmelo this summer has the potential to shift the powers at the top. And it is the one decision that will answer the question, “Who is Carmelo Anthony?” At the age of 30 he is at a crossroads in his career: Take as much money as possible and stay in New York or sacrifice the cash and become the impact piece to win a title?

Due to the Bird rights and many other seemingly ‘foreign concepts’ in the NBA collective bargaining agreement that I won’t get into, Carmelo can sign with the Knicks for five years and $129.1 million. Yeah, that’s a lot.

Even if that extension is with the Washington Generals, that’s a hard number to pass up. Especially considering rival teams can only offer him a four-year, $95.9 million deal. Not only would passing up on more than $30 million guaranteed be huge number to leave on the table for Melo personally, it would also cause a stir with the player’s union as well. But, ultimately none of that matters. What matters is, ‘Who is Carmelo Anthony?’ 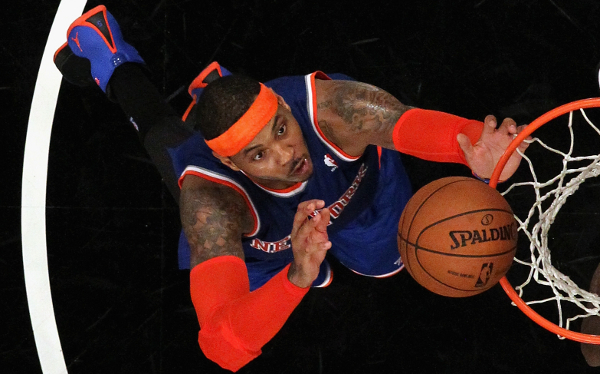 Anthony is not going to win a championship in New York. Period. Patrick Ewing and Walt Frazier aren’t coming back and there isn’t enough magic in The Garden to produce a Knick title. If Melo truly wants to put a ring on his finger, he is going to have to move on from his roots and depart the Big Apple.

Despite popular belief and the public’s love for the gossip headlines, Miami is not an ideal place for Melo. Sorry, not happening. The Rockets? A slightly better chance, but the same problem resides in Houston – there’s only one basketball. Melo and the James Harden coexisting would be a drama in itself. That leaves one ideal spot for Melo and one spot where his championship dreams aren’t a fairytale… Chicago.

Melo needs to play with another superstar and not just any superstar, but one who can run the show and create open looks for him. Even though Melo is perceived to be a great one-on-one player, he is much better with a point guard who can quarterback the game for him.

But Derrick Rose is a volume scoring point guard, right? Perception. Rose is only a volume scorer based on the pieces that have been provided for him in his career in Chicago. When has he been able to play with an elite wing scorer? Never. Hence the need to carry the scoring load himself.

And let’s take a look at when Melo has had a high IQ point guard to create shots – 2013 New York with Jason Kidd as well as every time he puts on the red, white, and blue for Team USA. In 2013, the Knicks had one of their most successful years averaging 10.9 made threes per game on 19.3 assists per game. 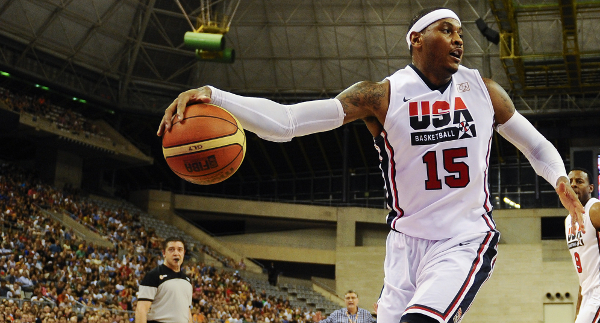 With Team USA, Carmelo has always stood out even among the stars. In 2012 at the London Olympics, Melo shot a scorching 54 percent from the field, 50 percent from beyond the arc, and averaged 16.3 points per game. Oh by the way, he was coming off the bench. Selfishness, get-mine mentality, nowhere to be found when he is among other stars.

Carmelo Anthony is an extraordinarily talented player and one that has fallen victim to the public perception label of selfishness and greed. But is he? Is that who Melo truly is or is he the most misunderstood player in the game?

The decision that lingers is the elephant in the NBA room and puzzle piece that could have a significant impact on who is holding the coveted Larry O’Brien trophy at the end of the 2015 season.

From that cold ride home from school both literally and figuratively after being cut from his high school basketball team, Melo has been out to prove everyone wrong. And he’s about to do it again.