Meadowlark Lemon: "Michael Jordan wanted to be like me"

Meadowlark Lemon: "Michael Jordan wanted to be like me" 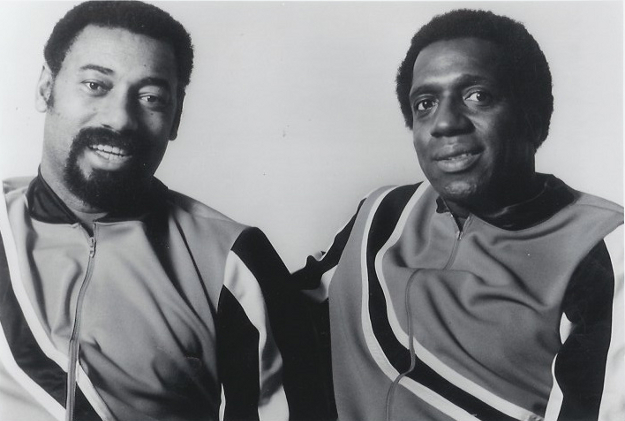 Last year, you were rushed to the Scottsdale Hospital with severe pain in your left side, which turned out to be caused by a life-threatening blood clot. Then cardiologist Dr. Ramy Doss and heart surgeon Dr. Robert D. Riley performed a minimal-invasive-mitral-heart-valve-replacement surgery, which saved your life. Please share with us your feelings and thoughts throughout all this life-threatening experience.

Meadowlark Lemon: Yes, that is correct. Doctor Doss was just 15 years old when he first saw me play in his hometown of Cairo, Egypt, with the Globetrotters. When he came to America he became a cardiologist and we met again here in Scottsdale. Doctor Riley saw me play in Philadelphia and is now one of the few doctors in the world who performs this type of minimal-invasive-heart-surgery, so I feel very grateful and lucky. I took Dr. Doss and Dr. Riley to the 2013 Basketball Hall of Fame Enshrinement weekend where they received a standing ovation when introduced as the Doctors who saved my life. They fixed me up and I've been playing basketball again! I've traveled this year to Austria and Germany to visit the troops and do a Camp Meadowlark Basketball Camp for their teenage kids stationed there with them. I’m doing speaking events and playing basketball again with my team, Meadowlark Lemon’s Harlem All Stars!

As a Globetrotter, you've been able to bring joy, comedy and pure basketball talent all around the world for decades. You even played with Wilt Chamberlain, right?

ML: Wilt and I were very, very good friends. He was one of the best if not the best player of all time. We worked together for 14 years as Harlem Globetrotters and then he played for me on my teams called the “Bucketeers” and “Shooting Stars”. If he's not the best, he's very close. I would choose my other homeboy, Michael Jordan. He grew up on one side of town and I grew up on the other side. We went to the same Boys Club and we were both influenced greatly by the director there that we called “Poppa-Jack”. When Michael was a kid, he said he wanted to be like me. That’s before kids later started saying, “I wanna be like Michael…”. I’m always honored when NBA players and a lot of the players that have gone into the Basketball Hall Of Fame tell me that they wanted to be like me when they were growing up. Others would mention other names, players that have been great contributors to the game of basketball.  Even though I didn’t play basketball with most of them, they know the history of the game and thank me and the Harlem Globetrotters for what we did to bring basketball to life in America and around the World.

Is it true that Chamberlain threw you several feet high up in the air?

ML: He was a seven-footer and I am a 6-feet-3, and he was so big and strong he could throw me up in the air and catch me like a basketball. We produced a trick that we had going the two of us: He threw me high up in the air and caught me like a little baby. People loved it. He was just that big, and just that strong… probably the strongest athlete that has ever lived, or close to it. He's the one who really started everybody to lifting weights. Before Chamberlain, we wouldn't want to get too big or too strong. When, he came that's one of the first things he did, lift weights, and began to eat differently. 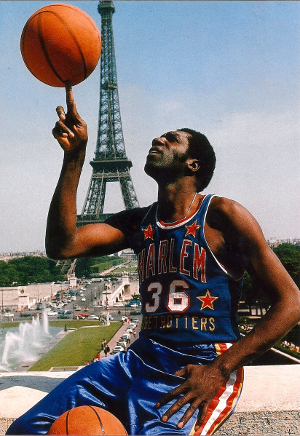 In all those trips around the world, you visited lots of places. Did you ever play on unusual basketball courts?

ML: We played many times in bullrings in Spain, Mexico and France. We played in the bottom of a swimming pool, we played a game on the USS Enterprise in 1966… We just played on every place you could possibly dribble a basketball. We played 350 games a year.  I’ve played in over 16,000 career games – an NBA player would need to play 160 games per year for 100 years to achieve my record.

And apart from those trips, you also visited the White House meeting Gerald and Betty Ford in 1974, right?

ML: Yes, that is correct. I was also a good friend of the Reagan's, because I'm also an actor. I worked closely with Nancy Reagan on her "Just say no to drugs" program. But you know, I've met so many good friends during all these years… I enjoy the memories as much as anyone. I have such a great respect for the great NBA players. Last week I was at the Basketball Hall of Fame Enshrinement Ceremony where I was with Bill Russell, who has more rings than anybody, and Sam Jones. I played against Jones, when we were in high school… Also I was with the Italian big guy, Dino Meneghin. He told me, "I saw you play basketball when I was growing up and I wanted to be as good as you." And in the end, he went into the Hall Of Fame with me in 2003.

You were a hook shot specialist like Kareem Abdul-Jabbar. Why is that nowadays that lethal shot is not used by the NBA stars?

ML: They are not teaching that anymore. They say it's too slow. I don't think it's too slow. If more players would use it they’d find out that it’s a good tool. Maybe one day it will come back again. I was told when I was growing up that if I would perfect that shot, no one would ever stop me. I was 11 years old at the time, and I never stopped practicing [the hook shot] and I guess I got pretty good at it. 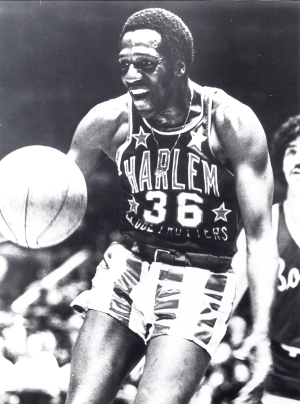 Looking at the past and the present of the United States and the world in general, those years where you played in a segregated United States… What do you think about the NBA's decision to take the Clippers away from Donald Sterling after his racist comments?

ML: He stayed past his time. But we are on the right track now. I'm happy to see players coming into the NBA from all around the world, from Europe, South America. It makes the game better. So many of them we have the same background, you know not having much and learning how to play a sport that brought us to another level.

Secondly, what's your take on the Washington Redskins name controversy? Should they make a change?

ML: That's going to change. All of these things will change. I'm friends with a lot of Native American and we talk about these things from time to time.

You're a ordained minister. Mark Jackson is also a licensed minister. Have you been in contact with him, or are you in touch with any current or former NBA player active in the Christian community?

ML: I admire Mark Jackson although I’ve not been in contact with him. I’d like to spend some time with him one day. I know so many NBA players today that actively share their Christian faith. David Robinson has an educational program for young kids all throughout Texas, and AC Green is a minister and has educational programs for kids. AC’s a good friend also. There are many great Christian players in all sports that I work with at charity events. We all like to give back and make the world a better place by helping others wherever we can. 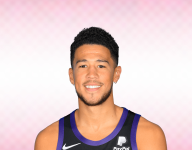