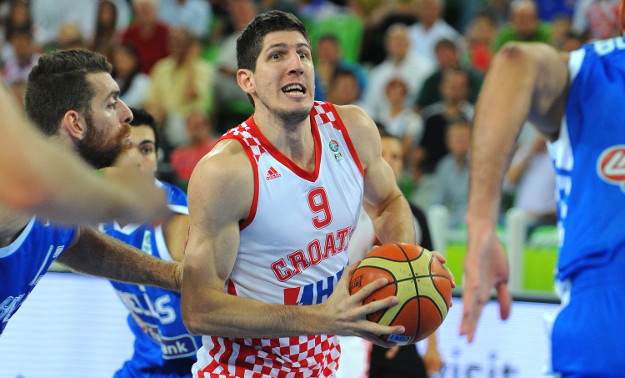 How do you feel?

Damjan Rudez: I'm very excited! We had our last tryout with Lithuania in Zagreb Arena and I think we did a very good job this summer preparing the World Cup. We're full of confidence and we're anxious to get the World Cup started.

You first played with the Croatian National Team in a big event in 2008.

DR: My first appearance was at the 2008 Olympics in Beijing, yes. It was an unforgettable experience. I'm happy I was part of that team. It was really amazing and we got a great result even though we didn't compete for a medal. It was a great success for Croatian basketball.

Can you compare both teams?

DR: I think from that Olympic team maybe me and Roko Ukic are the only players left. I don't think there's anybody else playing from that generation… But it makes no sense comparing the strenghts of both teams. Both rosters have great players. I think right now we have an excellent team full of confidence. We've been together for a long time, and I think we can look forward for good things.

Do you think you can get a medal?

DR: Of course every team has their own goals, but for us personally I wouldn't say not winning a medal would be a failure. We're very ambitious but we have to be very careful with our predictions. We know we're a very good team but we have no need to make any explosive statement like 'we're gonna win a medal' or 'we're going to play the finals'. The whole world knows that Spain and USA are the favorites in this World Cup. I would put us in a group after that along with France, Brazil, Serbia and the rest of the good teams that are competing in the tournament.

You're in group B: Sounds like Argentina and Greece are the big rivals and then Puerto Rico, Senegal and Philippines are a little bit behind.

DR: I don't think there's any team in our group that can be underestimated. I think everybody plays modern basketball now. There are no outsiders, really. Anybody can beat you any given day and we have to prepare very carefully and very thoroughly for every game. Obviously, Argentina, Greece and Puerto Rico are elite teams that have been competing at a very high level for many years. We have to focus on ourselves and we will do a very good job.

When were you first approached about the possibility of signing with Indiana?

DR: Well, my agent called me last May and told me there were several teams that wanted me to play for them in the summer leagues, but at the end we agreed to go to the States for a couple of workouts and it turned out great.

DR: I went for Cleveland for three days and I was there working out and then I went to Indiana. After that, I just waited for the situation to develop.

Have you spoken with coach Frank Vogel about your role next season?

DR: Yeah, we spoke briefly about it. I will speak more with him about my role when I finish playing the World Cup.

What do you think about the possibility of playing there?

DR: I'm very excited about my first season in the NBA. It's something I've worked for my whole life. I can't wait to start after the World Cup. I think I can contribute in many ways because it would be different if I went there when I was 20 or 22 years.

Yeah, you've proven your talent during your career and at 28 I'm guessing you don't expect to stay a lot on the bench.

Have you watched Paul George's injury?

DR: No. I haven't seen the video because everybody tells me it's terrifying. I thought what happened, I'm well aware of the situation…

DR: Yeah, that's what everybody tells me. I sent a message to Paul and I'm sure the organization is helping him to see him on the court again soon.

You have teammates in the World Cup with NBA experience like Roko Ukic. Have you talked with them to get some intel about your rookie season?

DR: I've had the chance to play with a lot of NBA players during my career in Europe and I kind of know what to expect when I get there, but of course you are never prepared 100 percent. I hope to make an easy transition and adjust quickly to the American life, I don't think it's going to be a big problem for me. I'm confident and ready.

What do you think about the Eastern Conference?

DR: The East is pretty strong this season. Pau Gasol will play with the Bulls and they're gonna be a strong squad, of course Cleveland no doubt about it, and Miami is still a very good, excellent team… but we have great ambition even though we won't have George. The organization has always high goals and everybody will have to step up in order to achieve those high goals.

Skilled seven-footers are in high demand in the NBA. You have one on your team – Ante Tomic. Do you think it would be good for him to maybe try to play in the NBA?

DR: I really don't know. He's the best or at least one of the best centers in Europe right now, a cornerstone in FC Barcelona, which is a powerhouse club in Europe. Whether he'll try to sign with a NBA team, I don't know. It's his decision. But I'm sure everybody in the NBA would love to have a player like him.