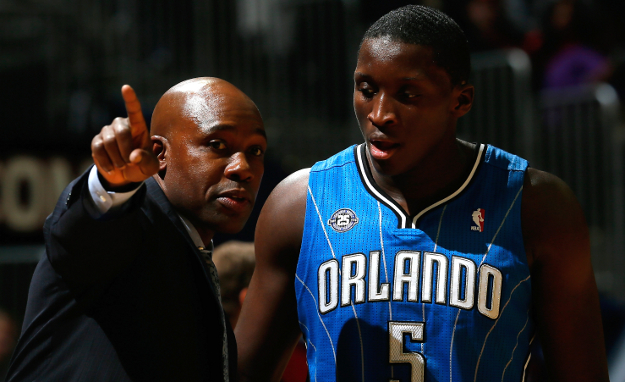 After getting a contract extension, I guess you are feeling very good about the job you've been doing as Orlando Magic's head coach.

Jacque Vaughn: People who are around me – our CEO, our ownership, our general manager – have a great relationship, and that extension just added trust to go forward with this group and keep improving.

Rob Hennigan was introduced as the Magic GM two years ago too. What is it like to work with him?

JV: Yeah, our relationship started back in our San Antonio days when I was a player and he was working in the front office there, so our connection started there. I think overall we have been on the same page on draft picks, people we brought into our locker room, so it's good to go to work and look over in the next office and see a guy that appreciates what you're doing and believes in what you're doing.

You've mentioned the Spurs. There's you, Hennigan, Sam Presti and more and more examples. What's so special about that franchise that helps people prosper in their careers?

JV: That's a testament to the people who run the organization. Starting with Mr. [Peter] Holt, the leadership that he has, GM RC Buford and then coach Pop [Gregg Popovich]. They have good people around him, they trust them, they guide them, push them, drive them and also believe in them. A lot of things that I carry on as a coach are the lessons I learned when I was in San Antonio.

One of the best examples of the good job the Spurs have done all these years is their success finding international talent – Tony Parker, Manu Ginobili, Tiago Splitter…

JV: Yes. There's great basketball not only in the States. The game probably has its best level of competition right now. Basketball is a tremendous game, it brings different people from all parts of social-economic backgrounds, ethnicities. It's a gatherer, a joiner.

And now you're in Granada, Spain, attending the World Cup and watching your new player Evan Fournier.

JV: Yes, that's why I'm here, to support him. Sometimes when you're on a new team, you don't know where you fit in, how you fit in with the new teammates and coaching staff… so it's a little bit of a step for us. Just to show him that we appreciate who he is as an individual and what is going to add to our team.

Have you talked with him?

JV: I'm careful about doing that. I want him to be totally focused on the French National Team and the tournament. He knows I'm here and I plan to catch up with him but the main thing is that I'm here to support him.

What do you expect from Aaron Gordon?

JV: He's a great addition to the culture that we have. We're really about having unselfish guys. He's a defensive-minded guy, who has a great athletic ability. He'll grow on the offensive end of the floor. He's a guy who will come to work every day and that's what we're looking for.

It's been two years of rebuilding now after the Dwight Howard era and five years since Orlando played the Finals against the Lakers. I guess the Magic fans expect a step forward this season.

JV: Overall, our group has been extremely patient and the people of Orlando have been extremely patient and we appreciate that. When we set out on this journey, we talked about it. We wanted a product that was going to be sustainable for a lot of years to come. We got great young guys around us and they are going to get better. This is a team that is going to have four or five of your favorite players. You're not going to have just one favorite player. Good things are ahead for us. We have versatility with this group. I'll be able to play a lot of different lineups and I'm looking forward to that. That's exciting for me as a coach.

Have you given up on the idea of having former lottery pick Fran Vazquez wearing a Magic jersey?

JV: [Laughs] Well, the great thing is that I have a general manager, and he's made trips to Spain before, so I'll let him deal with that side of the business. The players he brings in, I'll coach them.