The evolution of Team USA salaries

The evolution of Team USA salaries 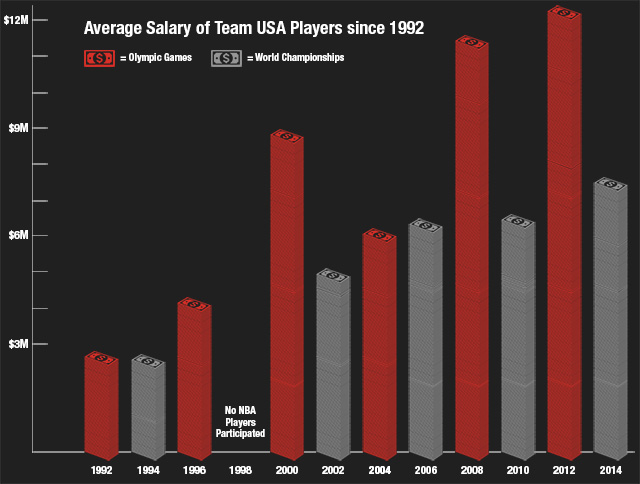 How much have salaries skyrocketed in the NBA? Well, Lakers superstar Kobe Bryant collected as much money in the season prior to his last Olympic appearance than the whole Dream Team (except Larry Bird) in 1992.

A deeper look at the surprising numbers below.

Celtic legend Larry Bird raked it in during his final season in the NBA, making twice as much money as the second-best paid player in 1991-92. That was not Michael Jordan, but longtime Cavs center John “Hot Rod” Williams. Yeah, we don’t understand either.

Second-year center Shaquille O’Neal was the highest-paid NBA player on the so-called Dream Team II, which featured veterans like Dominique Wilkins, Mark Price or Joe Dumars. The latter, a two-time NBA champion and Finals MVP, had never made more than $1.4 million in a year up to that point.

Salaries were rising fast in the NBA in the mid-90s. The second pro American entry at the Olympics cashed in 56 percent more money in 1996 than the members of the original Dream Team. David Robinson saw his salary grow 3.4-fold in that four-year period.

American NBA players wouldn’t play another big competition until the 2000 Olympics, where for the first time some Team USA members were making eight figures a season. Kevin Garnett and Alonzo Mourning alone were paid nearly as much as the entire Olympic squad eight years earlier.

The ill-fated 2002 World Championship team was not especially heavy on talent or in the pocket (for Team USA standards). Reggie Miller, Ben Wallace, etcetera, combined for $61 million the season before the tournament – the smallest amount since 1996.

There was a time when the U.S. team was led on the court by Allen Iverson and Stephon Marbury. They had the richest deals too. That ended with a bronze medal.

Reserves were making the most money on the last American squad to lose a game. The top players on the team were still working on rookie deals.

Probably the best team assembled since 1992… and by far the most expensive up to that point. Half the players had signed maximum deals. Chris Paul, who had the worst contract of the bunch, was paid better than 11 of the 12 Dream Teamers.

Some young guns that were about to take over the NBA (Kevin Durant, Derrick Rose, Russell Westbrook) stormed through the World Championship on cheap deals.

With a $25 million contract in 2012, Kobe Bryant became the best paid Team USA player ever. His record will survive until at least 2020.