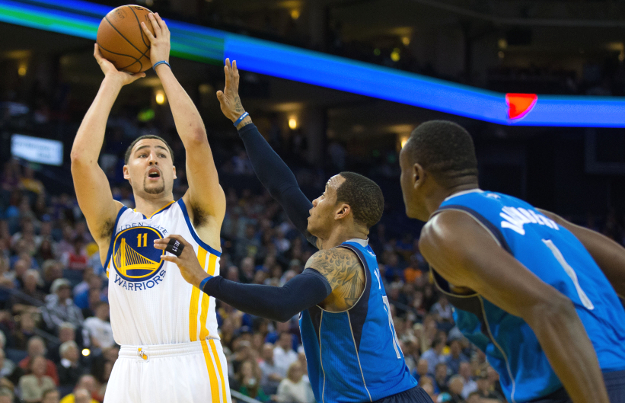 When you are one of the best players on the international stage of the FIBA World Cup, should there even be a debate on who is the best player in your household?

Don’t ask that question to the 1978 No. 1 overall pick Mychal Thompson, you already know the answer you are going to get. Selected five spots ahead of a kid from French Lick, Indiana, he might have a case. But not in this case. In an ultra-competitive home that houses a fringe NBA player, a minor-league center fielder, a former NBA All-Star as a father, and a mother who was a Division 1 volleyball player (talk about next-level genetics!), Klay Thompson still takes that cake.

The sharp-shooting 24-year-old Thompson has been nothing short of great for the Warriors posting career highs in points per game (18.4), field goal percentage (44%), and three-point percentage (41.7 percent). Not to mention coming off one of the hottest summers of any NBA player ranking second in points per game for Team USA and establishing his name among the league’s best. Perfect timing as he enters the final year of his contract, with his eyes on max money. But does he deserve a max extension? That’s the great debate.

Let’s take an in-depth look and dissect whether or not Klay Thompson is the best shooting guard in the game and whether or not he deserves a max contract.

There’s no denying that Klay Thompson is one of the best shooters in the game and has an unbelievably pure shooting stroke. I pride myself as being one of the top shooting coaches in the game, and Thompson’s stroke brings tears to my eyes. I’d compare it on par with – if not more beautiful than -– Michelangelo’s Sistine Chapel.

That being said, shooting ability alone can get you paid but it doesn’t garner max money. Offensively, Thompson excels in every catch-and-shoot situation: off-screen (1.012 points per possession), spot-up (1.144 ppp), and transition catch-and-shoot (1.179). That’s a given, just as the sun rises in the east every morning, it has been established that Thompson is an elite shooter. However, Thompson struggles in situations where he is forced to put the ball on the deck and create.

In isolation situations Thompson is converting at a mere 0.621 ppp and finishing at a mere 29.5 percent ranking him in the lower 17 percentile in the league behind players such as isolation extraordinaire Roy Hibbert.

Going even more in depth, when Thompson drives to the left in isolation situations (which he does 80.2 percent of his iso attacks) he is either heavily settling for a pull up jumper (48.2 percent of the time) of the time and shooting a lackluster 27.3 percent off the bounce; 33.8 percent of the time he is attempting to finish at the rim (an area he is increasingly improving at and showed great progress at the World Cup in Spain) but isn’t converting at much greater of a success rate (41.7 percent). What sticks out to me is the lack of in-between game, the floater, in which he only attempts 7.5 percent of the time he puts the ball on the floor.

One would think the sheer fact of being around Stephen Curry alone would rub off some of his floater magic and high-level acrobatic finish game. It’s an interesting statistic also to see the how heavily he favors attacking left as opposed to right, being that his dominant hand is his right hand.

That being said, a lot of right-handed shooters do feel more comfortable pulling up going left as it’s a more natural body motion and less shifting of the hips is needed. It’s either that, or the opponent scouting report is spot on to force Thompson to attack with his left. Either way, to be the best two-way shooting guard in the league Thompson is going to have to develop more efficiently creating his own shot and when he does, finishing that creation.

WHY KLAY THOMPSON IS THE BEST SHOOTING GUARD IN THE NBA

Let’s go over the facts that we already know – Klay Thompson can shoot it. Flat out. End of story. As a shooting guard, it tends to be very important to be able to shoot. Hence the name. Not only does it make the given player more of a threat offensively, but it also spreads out the defense and makes defensive rotations and adjustments a living nightmare.

Case in point: Danny Green – 2014 NBA Finals; Kyle Korver – every single game of his life. Thompson is currently on pace to become the best three-point shooter in NBA history. His Splash Bros partner Steph Curry might have something to say about that (another heated debate, as if Thompson didn’t have enough to competitively argue about with his father Michael. I think Curry can relate to this issue as well).

Thompson is the first player to ever reach 500 three-point field goals made in his first three seasons in the league, which is well ahead of the current record holder, the ageless Ray Allen. Think about it this way, if Thompson averages a very conservative 200 three-point makes per season (he made 223 last season) it would take him 15 seasons to reach 3,000 career makes breaking Allen’s record.

That is, of course, assuming the 18-year vet Allen doesn’t play until he is eligible for the AARP discount. Not only is Thompson on pace to become the top three-point shooter in NBA history, he and his Splash Bros partner are on pace to smash all the records as the best three-point shooting backcourt duo to ever play the game. They already broke the single season record of 435 held by Dennis Scott and Nick Anderson with an astounding 484 last season. Barring injury, they will become the best backcourt shooting duo to ever play the game.

As far as the two-way goes that we’ve been talking about, Thompson more than holds his own on the defensive end. In all four major guard oriented defensive categories – isolation, spot up, off-screen, and pick-and-roll ball handler – Thompson held opponents under 0.9 points per possession. He ranks in the top 75 percent percentile of the NBA in three of the four. In a recent interview, defensive extraordinaire Tom Thibodeau stated “Klay obviously has established himself as a great defender in the league.”

That’s like George Clooney giving you his approval as an eligible bachelor. Jim Boeheim also had a high amount of praise for Thompson: “He plays like he wants to beat you every play. He doesn’t take a play off, both ends of the court.”

Thompson is holding opponents to shooting an abysmal 35.8 percent from the field and forcing a turnover at a rate of 11.3 percent. With his length, mobility, and desire to win every play, Thompson has the mold to become a lock-down wing defender for years to come. 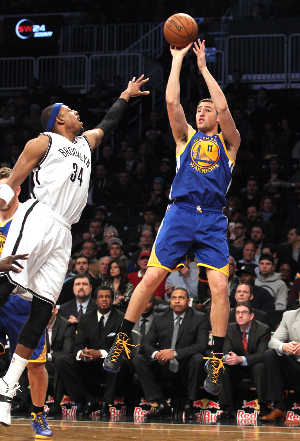 And don’t look now, but Thompson is developing into a very cerebral, high IQ player. His passing ability development has flown under the radar, and so has his ballhandling. Warriors fans might be hesitant to agree as his first two seasons were shaky with the ball, but he is quickly becoming a more than capable floor general in point guard situations.

At 6-foot-7 and with an absolute flame thrower for a shooting arm, this makes Thompson an extremely challenging player to defend and the type of player who deserves to be paid to the… (I’ll let you finish this sentence, but I think you know how it ends).

With the ability that he has shown to learn and grow as a player at a quick rate, the concern of creating his own shot is not glaring concern that one might think it would be for an NBA shooting guard. With the movement of Spurs Basketball sweeping through the league (as it should) the need for shooting guards playing off the bounce, one-on-one, a la Allen Iverson is much more of a lessening need than is the high IQ ball movement and extremely efficient shooting ability. Now you see why Warriors GM Bob Myers desperately wanted to keep Klay out of a potential blockbuster Kevin Love deal.

With that much faith and franchise importance demonstrated in turning down a current Top 10 player like Love, that speaks volumes to the Warriors long-term plans for Klay. And yes, as far as cards are currently stacking up, Klay will be stacking up some greenbacks on a max deal very soon.

The best two-way shooting guard in the league? That, however is still up for debate. After all, you never know when Mychal Thompson (that guy who is Klay Thompson’s dad) might lace ‘em up and make a comeback… at shooting guard.