Kevin Durant: A ton of mileage on his legs since going pro

Kevin Durant: A ton of mileage on his legs since going pro 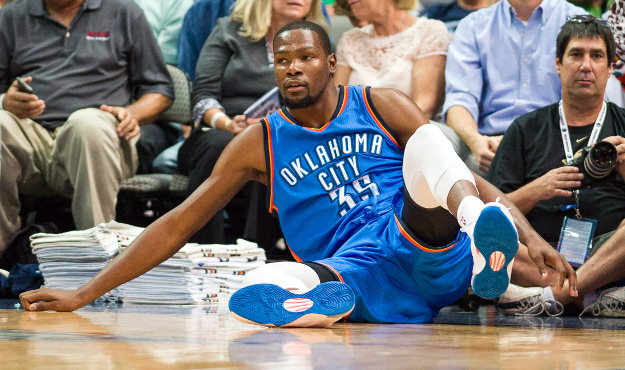 In a big setback to the franchise, the Oklahoma City Thunder announced Sunday that reigning NBA MVP Kevin Durant would miss time due to a fracture in his right foot. Durant, who recently passed on competing at the World Cup with Team USA, has logged plenty of mileage in the last few years, but even there he's in a familiar No. 2 spot behind Cleveland's LeBron James.

Ever since he entered the league in 2007-08, nobody has played more regular season minutes than Durant. He trails the four-time MVP in minutes played in official games overall, though. James has logged 1,584 more minutes than the Thunder forward in regular season, playoffs and FIBA competitions. Veteran Paul Pierce, a distant third, has taken part in more games than Durant in the last seven years, but spent 2,207 fewer minutes on the court.

Check out full stats with many other NBA stars below.