Is time up for Kobe Bryant?

Is time up for Kobe Bryant? 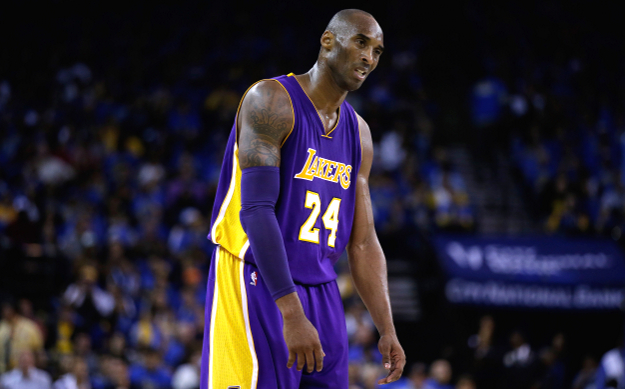 The alarm clock pulsates loud and clear, a monotonous beating sound against your brain letting you know it is time. This is the one of the most hated and dreaded sounds in the human society. However, this alarm that I am speaking of isn’t the annoying alarm of the 6 am wake up call. This is the alarm of Father Time. The one undefeated alarm that can’t be turned off by a simple arm flail to the snooze button.

While always undefeated, it is always challenged. Why? Because you never know when Father Time’s alarm is going to ring.

The glaring question today – has the alarm struck on Kobe Bryant?

For one of the most competitive people on the face of the planet, the answer to the question is obvious in his mind – No. But is that the truth? Does he have one last high-octane run in the tank or is his time of greatness up?

Let’s dive in and look in depth behind the scenes and find the truth and the answer.

THE FIVE MOST IMPORTANT NUMBERS

34.6 – Kobe Bryant’s usage rate through the first 16 games of the season. (Usage rate is the amount of a team’s possessions that a given player uses by ending that possession with a shot or a turnover). That is an alarmingly high rate, and a number that Vegas would put all of its money on that the Lakers as a team won’t reach in wins this season. Nearly 40 percent of all Lakers' possessions end with The Black Mamba. Makes for an easy scouting report write up for opposing assistant coaches.

23.1 – No, this is not the Kobe’s age. (Although at the pace he is currently on, he sure seems to think that it is). This is the amount of shots per game Kobe is averaging. This is more than he has ever averaged throughout his career and a number that makes Allen Iverson and Russell Westbrook look like John Stockton. 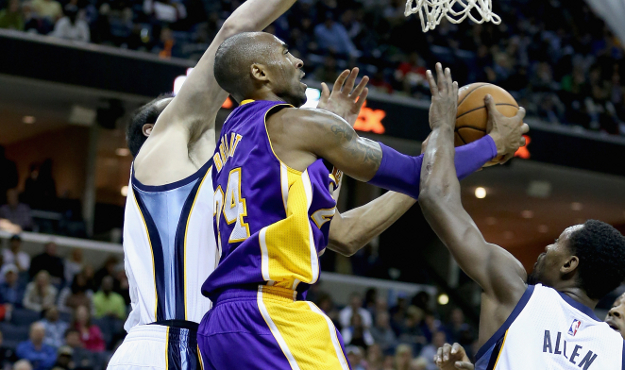 23,500,000 – The amount of dollars Kobe is making (or taking from the Lakers cap space) this season. One of the highest grossing players to ever play in the NBA, the $23.5 million not only hampered the Lakers' ability to surround Kobe with high-quality players, it basically paralyzingly tasered them on the spot when he inked the deal. Regardless of how much his LA fan/Lakers new TV deal value is, it isn’t as quite as much as it would be with more of one thing – wins.

6 – The number that keeps Kobe up at night. Championship rings won by the only person that might be more competitive than he is; his idol and his airness, Michael Jordan. If there was one thing that Kobe would give up his $23.5 million for (well, maybe) it would be changing the number five to a six.

46,137 – The one number that is the closest to his $23.5 million number is the number of minutes he has played in his career. This clock started ticking at the ripe age of 18 in 1996 before anyone had ever heard of Google or and iPhone.

WHY KOBE BRYANT IS STILL AN ELITE SUPERSTAR

You’ve probably all heard a story or two of Kobe’s unbelievable work ethic – shooting in an empty gym without a basketball (according to Shaquille O'Neal), forcing his high school teammates to games of one-on-one to 100, or waking up Team USA trainers to get into the gym at 2 am at a Vegas mini-camp to get in 800 shots. Whether all of those stories are true or not, the fact is undeniable that Kobe has one of the greatest work ethics of all time. And that is a big factor in why Kobe is still an elite superstar in the NBA. Whether it ultimately produces wins or not, the work ethic to not allow himself to fail has already held him afloat at the highest level years past his prime.

Here’s a true story for you that made me a believer in the power of Kobe’s work ethic:

I’ve got close friends within the Lakers' organization past (which we’ll get to later) and present. I’ll keep all names anonymous, however. It’s late August and I’m having dinner with one of my friends at a small hole-in-the-wall diner in West L.A. I asked him how Kobe was looking and how his body was holding up (this was before we knew if his body would be healthy enough to withstand carrying the entire Lakers' offense on his shoulders). The response I got was not one that I was expecting.

I thought I might get a ‘yeah, he’s looking good,’ or a ‘he’s really sore after workouts’ type of response. But instead I got, ‘All he can talk about is Christmas. He’s circled it on the calendar, he talks about it with his teammates, he can’t stop talking about Christmas.’ Why? That’s the date when the Lakers play the Bulls in Chicago. First of all, the Lakers don't play on the road on Christmas Day. Secondly, Pau Gasol plays for the Bulls now. Kobe and Pau had plans of retiring together in L.A. Kobe feels betrayed by Pau and wants revenge just as he does on the entire NBA for the disrespect of scheduling the Lakers for a Xmas day road game.

WHY KOBE BRYANT IS NOT AN ELITE SUPERSTAR

Here is a stat that is never good – field goal attempts per game > points per game. That equals extreme inefficiency, and the Webster’s definition of a high-volume scorer. Sure, it looked great when Kobe put up 38 against the Warriors recently. But what doesn’t look so great is the fact that it took him 37 shots to get there, completely threw his teammates out of any semblance of an offensive flow, and resulted in a 20-point beatdown by the Splash Bros.

Since Kobe’s prime in 2006 when he went absolutely nuts pouring 81 on the Raptors and averaging 35.4 points per game, his numbers have steadily been on the decrease. If you just look at the points per game numbers on the surface it is tough to see the sharp decrease as Kobe has been able to keep it above 25 ppg. However, if you look more in depth you are able to see where Father Time is making his mark. Points per game can stay consistent with one variable – shots attempted. That seems to be the theory that Kobe is embracing this season.

Kobe’s player efficiency rating is at its lowest level since before the millennium, 20.87. His field goal percentage is continuing to decline and is currently at an all-time low 39.2%, the first time he has dipped under 40%. Blame it on a slow start or not enough help offensively, but what is truly troublesome is his mid-range numbers. Kobe’s bread and butter – his ability to create his own shot in the mid-range with quite possibly the best footwork to ever play the game. 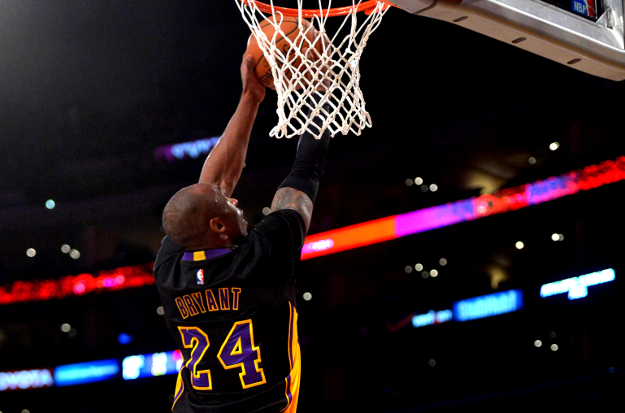 However, this season from 3-10 feet he is only shooting 32.1 percent and from his automatic range 10-16 feet he is ice cold shooting 30.6 percent. No matter how many undercover, Mission Impossible type of German knee surgeries that he has done, Father Time continues to strengthen his pull. Need proof? Kobe’s dunk rate in his prime – 0.038. This season – 0.005.

And let’s not even talk about his current win-shares percentage. It is at an all-time low, but I understand that win-shares have a lot to do with the supporting cast, as well. However, not only is his offensive ability on the decline, so is his defense. And at a much more rapid rate. Defensive box plus minus (ODPM) is a stat that shows the box score estimate of each player’s defensive impact per 100 possessions. Currently, Kobe’s ODPM is at 3.2, his lowest since he broke into the league as a teenager. Somewhere James Harden is smiling.

And when it comes to players desiring to play with Kobe? Well, he’s not exactly on the top of everyone’s wish list to put it kindly. Despite what some players will say, don’t kid yourself, no one is lining up at the door. From multiple direct sources that played with Kobe in the past, when asked if they still stay in touch with Kobe – ‘Nope, no one does.’ I think that’s all you need to know to make the judgment for yourself.

There is always two ways to look at something. Like the famous mural where you see an old hideous woman from one point of view or a young beautiful lady from another. Kobe is that mural.

Is he still a superstar? Does he have one run left in the tank as an elite player? Or has he been officially ‘Herny Abbott-ed’? Is he the reason for the demise of the Laker’s franchise and what has now turned them into the current red-haired step child of the NBA? You can make your decision on that. (I think you probably already have). Similar to MJ, K-O-B-E is a religion. To you, he is either the player who was ranked 40th in the preseason by ESPN and a thorn in the Lakers' side or he is the dominant, killer-mindset Mamba Kobe that once put up a jaw-dropping 81 on Toronto. 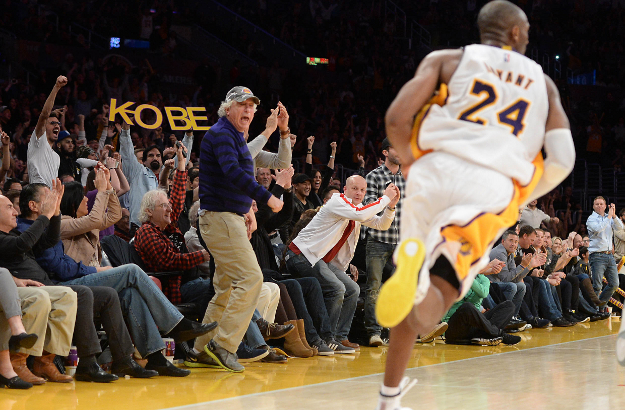 And how about the $23.5 million deal? Just another example of the Kobe mural. Is it straight greed and selfishness? Or the angle no one is talking about, is it Kobe’s way of saying ‘California state tax has taken a big percentage of my income every year, the $23.5 million is the only way I can pocket what others of my caliber are pocketing throughout the league.’

You make the call.

Either way, there’s one thing that’s not going to change – Kobe. He is who he is, and like it or not he’s going to do what he wants. Whether that is the deterrent that sends potential free agents running the other way or not, Kobe will be Kobe. All I know is, while Kobe is still in L.A. eating up the Lakers' cap room and playing option 1, 2, and 3 offensively, the chances of another title (or playoff run) in the near future are about as likely as Kobe passing up an open (or contested) shot.