Why is Monta Ellis so much better now?

Why is Monta Ellis so much better now? 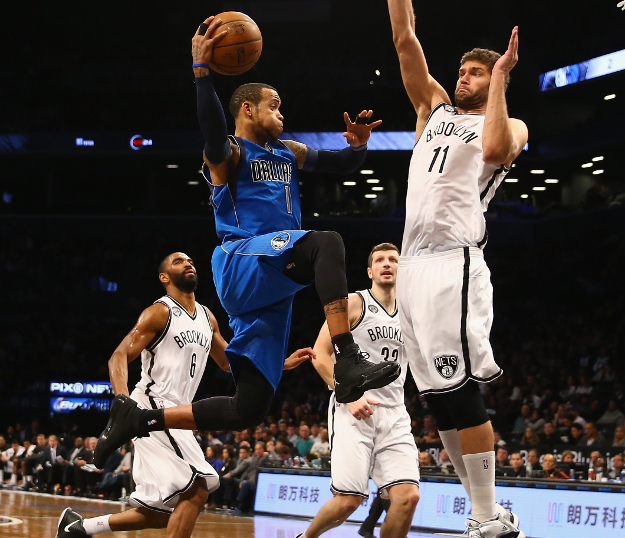 Can a high-volume scorer ever truly become an efficient player?

Can a player who has rarely ever seen a winning season become a winner?

In a league that is not kind to 6-foot-3 and under scoring guards (the last team to win the NBA title with their leading scorer checking in under 6-foot-3 – 1990 Detroit Pistons led by Isiah Thomas), is it possible that the leading scorer of the most efficient team can turn the table on every trend and be just the wild card maverick Dallas has been looking for?

Introducing the man who is filling the shoes, 6-foot-3 (on his tip toes) Monta Ellis.

Dallas currently holds the highest offensive efficiency rating (number of points a team scores per 100 possessions) since the 2009-2010 D’Antoni & Nash show in Phoenix. And Ellis has been the man behind the engine of the well-oiled 111.8 offensive efficiency juggernaut. Not only is Ellis leading the Mavs in scoring, but he is also leading them in assists. This is a far cry from the high shot volume hoisting Ellis of days past.

How did this transformation happen?

How is Ellis now holding the keys to the city of Dallas and the Mavs chance at a title?

Let’s dive in and find out.

Ellis broke into the league as a rail thin teenager from Mississippi, an afterthought of the 2005 NBA draft (pick number 40). Ellis’s calling card? Put the ball in the hole, the reason he was in the league. The knock on him coming into the league was that he needed to shoot a high volume of shots to score and would never be a championship-caliber leader. And through his first nine seasons in the league he did just that, averaging 25.5 and 24.1 points per game in back-to-back seasons with the Warriors 2009-2011. However, these offensive outputs never translated to wins or title contention hopes. Just another twenty shot per game, twenty-point scorer. The championship formula equivalent to mixing a can of lighter fluid with gasoline.

Call it a mid-life crisis, call it whatever you want, Ellis has been reborn.

Fast forward to present-day Dallas, Ellis is currently enjoying one of his highest PER ratings, has the second highest win/share percentage of his career, all while clocking in one of the highest usage rates of his career as well. He is also getting the line at 4.3 times per game, one of the highest in his career. Maybe in part to one of the best marketers in the game, flamboyant owner Mark Cuban – maybe you’ve heard of him. Cuban has even made a push for the reserved Ellis to become even more outspoken and a better salesman (vying for more trips to the free.throw line). Case in point, Ellis is the Mavs' workhorse.

Now to find out exactly why the change has happened.

Looking deeper into the analytics and film breakdown, Ellis has been put into more offensive advantageous situations than ever before. Primarily throughout his career, Ellis has been isolation heavy and transition dependent for his scoring opportunities. He is currently functioning at 48.2 percent of his offensive touches in pick-and-roll situations, one of the highest rates per touches in the entire league. The most difficult situation to guard in basketball, yep you guessed it – the pick-and-roll. Ellis has been able to create highly efficient looks for himself as well as turning himself into a bonafide playmaker.

When Ellis is involved in a pick-and-roll as the primary ball handler, the Mavs are scoring at a 42.3 percent rate and shooting an adjusted field goal percentage of 45.5 percent. Ellis has developed a knack for not only scoring effectively using the ball screen when he dribbles off the pick, in which he favors a pull up jumper (57.7 percent of his shots off the ball screen, converting at 45.3 percent) but he has also become a high IQ situational scoring threat. The players who are able to function at a high level offensively know the elusive skill of deception, setting the defender up throughout the game – something I spend a great deal of time working on with my NBA clients on.

Ellis has also been able to use the ball screen to become a high level playmaker, thanks to his ability to score off the ball screen and his teammate around him. 56 percent of Ellis’s passes off the ball screen are going to spot-up shooters, with an adjusted field goal percentage of 51.2 percent, putting him in the top 9 percent of the NBA creating off the ball screen, ranking him ahead of the likes of Russell Westbrook, Ty Lawson and Kyle Lowry. This is leaps and bounds from where he came from as a high-volume shooting, only looking to get his, offensive player. Doesn’t hurt, of course, to have players like Dirk Nowitzki and Chandler Parsons spotted up on the receiving end of the pass.

An area that Ellis has vastly improved upon that gets overlooked is what I call hope shots. These are shots that are of 7+ dribbles within the offensive half court set and also shots where the defender is less than four feet in contested distance. The one main thing that every offensive player wants – time and space. How important is it? Overall, on average, players shoot 24.7 percent high percentage on uncontested shots (with more than four feet of distance between them and the nearest defender). Ellis, the former king of the hope shot, has cut his rate of low-percentage shots down astronomically from when he first entered the league.

Here is a look at his ‘shots off the dribble’ efficiency chart: Only 12.5 percent shots per game are coming from 7+ dribbles. Ellis is also rarely shooting a three point attempt off the dribble, which also makes for higher efficiency.

In a league where most players are ‘what you see is what you get’ from the moment they step foot on the floor, the Monta Ellis transformation from high volume scorer to efficient playmaking team leader has been the reason why the Mavs are a legitimate threat to hoist the Larry O’Brien trophy in June. If you need comparisons, it’s basically been like the equivalent of the high maintenance prom queen turning into Mother Teresa. Or, in NBA terms, Carmelo Anthony turning into Steve Nash. (More of a chance for the prom queen transformation, I’m guessing)