Some numbers to make All-Star snubs even more upset

Some numbers to make All-Star snubs even more upset 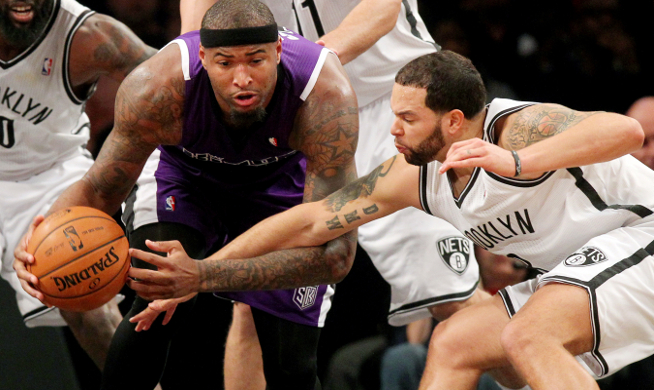 It was bound to happen.

The Western Conference is so choke full of talented players that at least a couple of guys with a realistic shot at making an All-NBA Team at the end of the season were going to be left off the All-Star Game.

Not surprisingly, All-Star snub veteran DeMarcus Cousins and Damian Lillard, who was cut from Team USA last summer, were the ones squeezed out.

They are both having fantastic seasons and have every reason in the world to be upset. Now let's put salt in the wound with a few numbers.

Let's start off by comparing Cousin's numbers to Tim Duncan's.

While Duncan's stats are no joke, they can't compare with Cousins'. Actually, no center in the NBA is putting up better numbers than DMC, who's averaging career-highs in scoring, rebounds, assists and blocks.

– He's the lone NBA player averaging more than 20 points and 11 rebounds per game this season.

– Should he keep up those numbers, Cousins would be the first player in NBA history to have back-to-back 20+11 seasons with no All-Star selection.

– He leads all NBA centers in scoring and only trails Clippers' DeAndre Jordan and Pistons' Andre Drummond in rebounds.

– Cousins has better PER than 18 of the 24 players selected for the All-Star Game.

There's little question that Lillard, who leads the NBA in fourth-quarter scoring, is a Top 15 player in the NBA, but he had two things going against him: 1. Fans voted Kobe Bryant as a starter; 2. There's too much talent at the guard positions in the Western Conference.

His numbers compare favorably to those of the backcourt players that made the Eastern Conference All-Star team, though.

A Top 6 player in win shares so far this season, Lillard is a natural fit to replace Bryant on the Western Conference All-Star team. It would be quite a surprise if he's not Adam Silver's pick.

That would still leave Cousins out, which makes you feel for the big men who have to face him for the rest of the season.