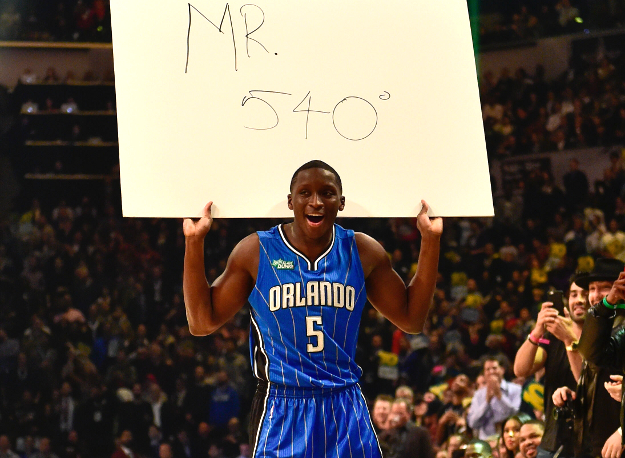 As you finalize your FantasyScore lineup for Sunday, make sure to keep an eye on the status of Oklahoma City Thunder F Kevin Durant (foot). He missed Saturday's game, and in his absence, G Russell Westbrook ($9,000, 18.0% of cap) exploded for 55.75 FantasyScore points. If Durant sits again tonight, make sure to make room in your lineup for Westbrook.

He lit up the Spurs for 53.50 FantasyScore points in his first game out of the break, and he should have another big performance tonight against an Indiana team that he scored 52.75 against earlier this year.

Williams wasted no time making an impact with the Hornets, delivering 46.50 FantasyScore points and playing 38 minutes in his team debut Saturday. With G [autotag]Kemba Walker[/autotag] (knee) sidelined, Williams should continue to serve as the team's main perimeter weapon.

He has been playing well recently, topping 30.00 FantasyScore points in four of his last five games. Meanwhile, the 76ers just traded away their best perimeter defender, Michael Carter-Williams, giving Oladipo a great chance to top the 36.25 FantasyScore points he scored the last time these teams met.

With Arron Afflalo out of the picture, Gallinari started and played 36 minutes Friday, finishing with 27.25 FantasyScore points. He should see enough minutes again tonight to provide solid production while opening up plenty of cap room.

Carlos Boozer was a healthy scratch Friday, and Davis took advantage of extended playing time to pile up 44.00 FantasyScore points. It appears the Lakers are in full tank mode to try to keep their protected first-round pick, and younger players like Davis should continue to see heavy minutes. He offers great value tonight against Boston's 25th-ranked scoring defense.

With Kelly Olynyk (ankle) and Jared Sullinger (foot) both sidelined, Zeller is the last center standing in Boston. He delivered 37.50 FantasyScore points Friday, and he should have another big night against a Lakers defense allowing the most points per game in the NBA and the most rebounds per game to opposing centers.

Nowitzki has been in a bit of a slump, failing to reach 30.00 FantasyScore points in four of his last five games and scoring less than 25.00 in his last two. With plenty of value options available at the forward spot tonight, there is no reason to pay up for potentially mediocre production.