Who should you start: Stephen Curry or Russell Westbrook?

Who should you start: Stephen Curry or Russell Westbrook? 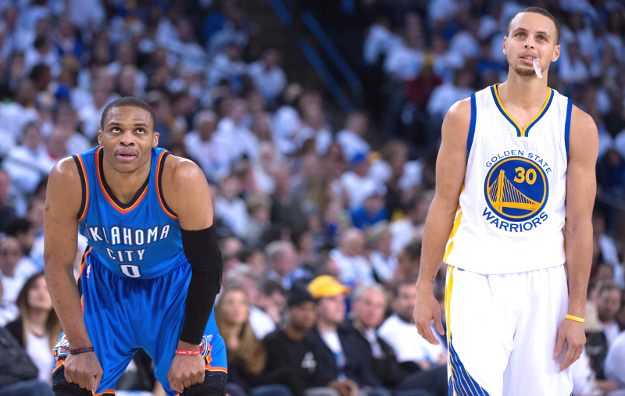 Golden State Warriors point guard Stephen Curry (ankle) is probable to return from his ankle injury. However, he faces a tough matchup, and you're probably better off spending your cash on another well-known guard.

It feels like a broken record how many times we praise Westbrook for how awesome he is when Kevin Durant (foot) is out. It simply can't be overstated. He is averaging 55.8 FantasyScore points his last three games. He needs to be in your lineup to at least stay on par with the rest of your league.

Jackson recently expressed a comfort level with most of the team's offensive sets. He delivered 29.25 points in his Detroit debut despite missing his first eight shots. The offensive upside is real, and he could provide a large profit at this price despite a tough matchup.

It's amazing what a change of scenery can do. Smith was erratically playable with New York, but he has been a solid midrange guard in Cleveland. He has averaged 32 FantasyScore points over the last seven days and makes a nice play with an eye on that 30-point mark.

The Pacers have struggled against opposing centers the last 10 games. Kanter is on the upswing after a 40-point showing on FantasyScore two days ago. If you decide against either of Detroit's big men, Kanter is a solid midrange option.

Johnson isn't a sure thing, but he has produced four games of at least 24 FantasyScore points in his last six. He's averaging 15.2 points per game in that stretch. Low-end bargains are hard to come by with just four games Tuesday, and he's one with some upside.

Detroit features one of the more imposing frontcourts in the East. Love had just seven points and eight rebounds against them in their last meeting Jan. 27. He's always a threat to break off a 40-point night on FantasyScore, but there are a lot more consistent options to choose from.