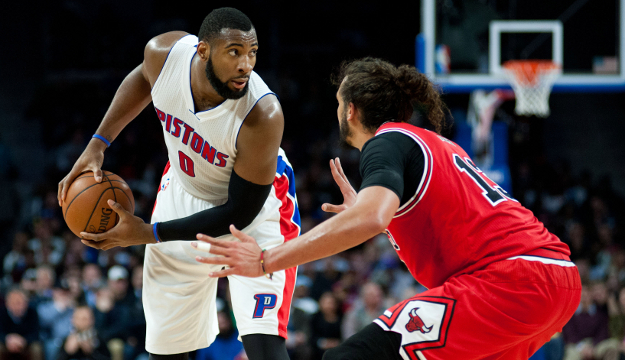 Today's player pool somewhat thin at the top, but several mid-to-upper-tier assets are worth the Saturday start.

Eric Bledsoe ($7,100 salary; 14.2% of cap) is coming off a 65.3-fantasy-point domination of Oklahoma City, and he scored at least 37 on FantasyScore in each of the three games before that. He's hottest guard option in the pool. Conversely, Kyle Lowry ($8,000; 16.0%) is coming off a miserable 5.5-point showing and has touched 30 fantasy points just three times in 10 games. He faces a good matchup against the New York Knicks, but he's clearly struggling.

The stat sheet has had Drummond's name all over it of late. He's averaging 18.5 points, 15.5 rebounds and 1.5 blocks per game over the last four games. That has equated to 42.1 FantasyScore points per game. The Wiz have been one of the worst teams against centers in the last five games . There is no drumroll necessary when selecting your starting center Saturday.

Favors has been on a roll since Enes Kanter was dealt. He's posting 36.6 FantasyScore points per game over the last four contests. The Bucks are in the lower third of the league in defending power forwards over the last 10 games .

The team has struggled during their annual rodeo road trip, and Leonard has turned it up a notch with his team struggling. He has averaged 38.4 FantasyScore points over the last two outings. Phoenix is about the middle of the pack at defending small forwards the last five games.

Galloway has gone from fighting for a 10-day contract to becoming one of the Knicks' top scoring options in Carmelo Anthony's (knee) absence in a matter of weeks. Galloway has posted 28.9 fantasy points per game over the last four contests. He's a good midrange guard against a Toronto team that has had some leaks in their defense of late.

KCP has been on fire of late, as evidenced by that highlight chasedown block against the Knicks last night. He has averaged a solid 32.8 fantasy points per game over the last three, while the Wizards have struggled to defend shooting guards. Reggie Jackson ($5,400; 10.8%) has a bit more upside, but KCP is a usefully priced contributor who won't burden your cap.

MCW's first two games with his new team didn't provide fruitful results. He averaged 18.9 FantasyScore points per game, which is an indication the transition is going to take some time.