Isaiah Canaan will fire off more fantasy points on Monday

Isaiah Canaan will fire off more fantasy points on Monday 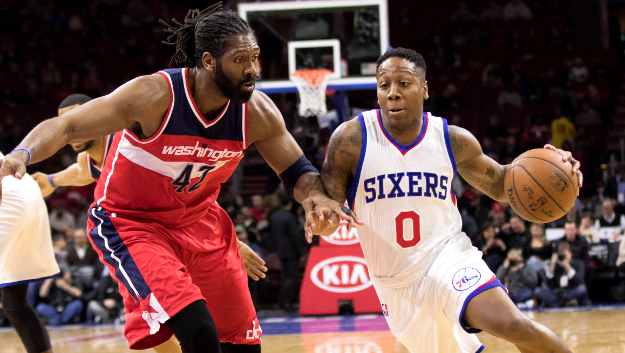 With just five games on the Monday schedule, it is the type of night when spending a little more for the few proven options can really pay off. Of course, finding cheap sleepers to free up cap space can help the process, and there are several situations worth keeping an eye on leading up to tip-off.

Miami Heat guard Goran Dragic (back) is questionable tonight, and Mario Chalmers ($3,700 salary, 7.4% of cap) should make a solid fill-in if Dragic sits. In the same game, guard Brandon Knight (hip) is questionable for the Phoenix Suns, and Gerald Green ($4,300, 8.6%) is worth a look if Knight doesn't suit up.

Also monitor Toronto Raptors guard Kyle Lowry. He has been struggling with his shot and could be given a second game off in a row. If he does rest, Greivis Vasquez ($2,600, 5.2%) makes a great source of cap relief.

He has been more aggressive on the offensive end since Blake Griffin (elbow) went down, and Paul has topped 45.00 FantasyScore points in eight of his last 10 games, including four straight. CP3 should put up another huge total tonight against a Minnesota team that is one of the worst at defending point guards.

Canaan has struggled with his shot a bit since joining the 76ers, but he is playing 28.5 minutes per night and has a solid matchup against a Toronto team allowing the fifth-best field goal percentage to point guards . He has solid upside for the price.

Ellis has already carved up the Pelicans in three outings this year, averaging 39.63 FantasyScore points and shooting 56.7% from the field. Pay up a bit for the proven production on a light night.

The Clippers have struggled at defending small forwards all year, and they are currently allowing the most points, rebounds and assists per game to the position. Meanwhile, Wiggins enters the game averaging 21.6 points in five games since the All-Star break. The rookie is playing his best basketball just in time for a great matchup. Make sure to take advantage.

Whiteside has Miami's frontcourt to himself, and he is averaging 35.00 FantasyScore points in five games since Chris Bosh (chest) was lost for the year. Tonight, he should have his way with an undersized Phoenix frontcourt tied for the seventh most points allowed per game to centers.

Jordan has been a rebounding machine with Griffin sidelined, grabbing at least 15 in eight straight games. More importantly, he has topped 35.00 FantasyScore points in all eight contests, eclipsing 49.00 six times. Jordan draws a great matchup against a Minnesota team allowing the second-most points per game in the league and the most blocks per game to opposing centers.

While Miami hasn't been great at defending point guards this season, Bledsoe was dreadful in his first meeting with the Heat, finishing with just four points on 2-of-11 shooting and seven turnovers. He could bounce back tonight, but his price tag makes it tough to justify taking that chance.

He finally had a decent performance Saturday, but Nowitzki is still shooting just 42.7% since the All-Star break, and he has failed to reach 25.00 fantasy points in four of the six games. Don't pay for another mediocre performance from Nowitzki when there are players that offer more upside for a similar price.