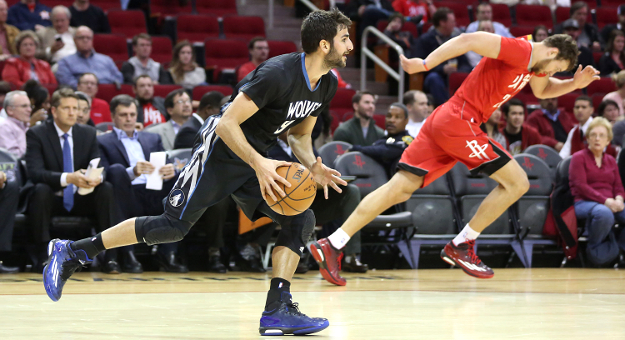 With 13 games on the schedule Wednesday, there are going to be plenty of lineup combinations in play at FantasyScore, some of which will inevitably post big point totals. On such a busy night, identifying sleeper and midrange picks with both a safe floor and a high ceiling is crucial.

There's plenty to watch on the injury front, too. Miami Heat guard Goran Dragic (back) is questionable, and if he sits, Mario Chalmers ($3,700 salary, 7.4% of cap) should make a solid fill-in against a Lakers team that has been awful at defending point guards.

Keep tabs on the status of Toronto Raptors guard Kyle Lowry. He may receive the entire week off to rest. If so, Greivis Vasquez ($2,600, 5.2% of cap) figures to inherit a much larger role.

James has topped 45.00 FantasyScore points in four straight games, and he seems to be saving his best for the tougher competition. He topped 60.00 fantasy points against Golden State and Houston last week, and with the Cavaliers sitting a game back of Toronto in the Eastern Conference, James won't be messing around tonight.

Since being acquired by the Hornets, Williams is averaging 39.46 fantasy points over six games and has topped 40.00 in three straight. He has no competition for minutes at point guard with Kemba Walker (knee) sidelined, and he should continue to provide high-end production at a mid-range price.

Rubio has been rolling since the All-Star break, topping 40.00 fantasy points in five of six games, including three straight. Tonight, he draws a friendly matchup against a Denver defense allowing the fourth most points per game in the NBA and the most assists per game to point guards.

The return of Wilson Chandler (groin) hasn't slowed down Gallinari, and he is averaging 29.3 fantasy points over his past five games and 32.38 in two games with Chandler back in the starting lineup. Gallinari should provide safe, solid production again against Minnesota's 29th-ranked scoring defense, and he has been owned in just 5.4% of FantasyScore leagues over the past seven days.

After being easing Jones back into the mix, Houston has let him loose following the All-Star break. He is averaging 34.57 fantasy points in his last seven games and hasn't scored fewer than 27.75 during the stretch. Jones offers reliability and upside at a price that won't break the bank.

Although Anthony Davis (shoulder) could return tonight, Ajinca should still see extra minutes with Ryan Anderson (knee) sidelined. He has provided at least 24.00 fantasy points in five straight games and has topped 30.00 in two of his last three. Meanwhile, the Pistons are allowing the third most points per game to centers.

Gobert has been a force since joining the starting lineup after the All-Star break. He pulled down 24 rebounds last night and has now topped 30.00 fantasy points in five straight games. He should post another big line tonight against a Boston team allowing the most points per game to the center position.

Considering he is working his way back from a foot injury and learning a new offense, it is not a big surprise that Carter-Williams has failed to reach 25.00 FantasyScore points in three of his four games with the Bucks. Spend your money elsewhere tonight.

West has been quiet since the All-Star break, logging 25.00 fantasy points or fewer in all five games. On a busy night in the NBA, there are too many players in the same price range that offer more upside to justify using West.