With eight games on the schedule tonight, there are enough options available to build a balanced FantasyScore lineup of mid-priced players. However, there also happens to be several attractive sleepers in play tonight, and paying up for two or three high-priced studs while taking advantage of a few value plays might be a more effective strategy.

Speaking of value picks. Keep an eye on the status of Miami Heat G Goran Dragic (back) heading into tonight’s game against the Boston Celtics. He is questionable to play, and Mario Chalmers ($3,700 salary, 7.4% of cap) should make a solid fill-in if Dragic can’t suit up.

Curry is the top option available at the guard spot tonight in terms of fantasy points per game, and he draws a great matchup against Phoenix's 28th-ranked scoring defense. In two previous meetings with the Suns, he is averaging 48.25 fantasy points.

Golden State has been embracing a smaller lineup lately, and Livingston has been the beneficiary of additional playing time. More importantly, he has delivered at least 27.75 FantasyScore points in three straight games, and tonight, he faces a Suns team allowing the third most points in the NBA.

Rubio has been rolling since the All-Star break, topping 40.00 fantasy points six times in eight games. The hot stretch includes a meeting with the Clippers last week when he logged a triple-double on his way to 50.50 fantasy points.

He doesn't have a ton of upside, but Gallinari has scored topped 20.00 fantasy points in eight straight games, managing at least 27.50 six times during the stretch. He should be a safe source of cap relief tonight against the last-place Knicks. Kidd-Gilchrist has been steady since the All-Star break, posting more than 20.00 fantasy points in all nine games and eclipsing 30.00 four times. Tonight, he faces a Washington team allowing the fourth most points to small forwards, and he should be a one of the safer value plays.

He is coming off a career-high 30 points Saturday, and Middleton continues to thrive as the team's main offensive weapon following the Brandon Knight trade. He has topped 25.00 fantasy points in seven of his last eight games and has registered 40.00 twice in his last three. In terms of reliability and potential, he might be the best bargain on the board tonight.

Bargnani has been the Knicks' best offensive player lately, and while that doesn't exactly say much, he has delivered at least 29.75 FantasyScore points in four of his last six games. The Nuggets are currently allowing the third most points per game to centers, giving Bargnani plenty of upside for the price tonight. 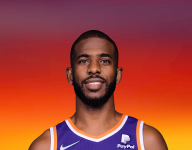