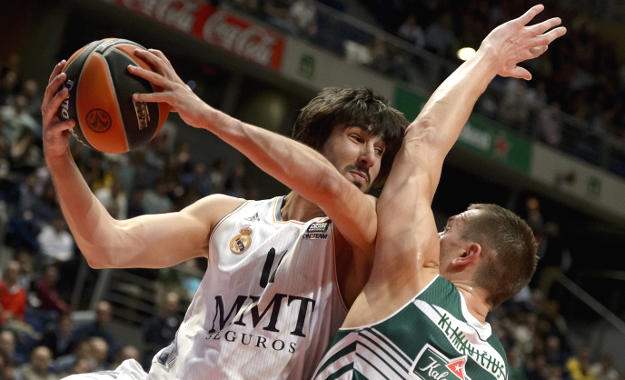 In our latest mock draft, the first two international prospects come at No. 9 and 13. Both play in the Spanish League, although one is from Croatia (Mario Hezonja) and the other one Latvian (Kristaps Porzingis). There will be no Gasol-type or Rubio-esque talent coming out of the Spanish bullring in years to come, but there's a small forward who is the second best rebounder of the ACB and is quickyly becoming a real threat from beyond the three-point line this season: Dani Diez. Born in 1993, the 6-foot-8 forward will be eligible in the draft and a bunch of NBA franchises want to take a close look at him at the pre-draft workouts.

After averaging less than 10 minutes with Real Madrid last year, Diez was sent on loan to Gipuzkoa Basket this season. He said goodbye to Euroleague exposure there, but in return his playing-time load (30.1 mpg) and role are way bigger now. Last month, he scored 32 points in a game vs. Andorra, a feat only six players 21 years or younger had ever accomplished in the ACB before.

"I'm getting a lot of opportunities this season and I've improved a lot, especially outside the arc, getting to the rim and rebounding," Diez tells HoopsHype.

Diez is no stranger to the U.S. and NBA players.

"Last summer, I didn't do any workout but I was in Los Angeles for 10 days and practiced a lot with current NBA players like Steven Adams, Kentavious Caldwell-Pope and Kelly Olynyk," Diez recalls. "It was a great experience: lots of shooting drills, one-on-one plays… It gave me a lot of confidence for this season. This is my draft year and I'm proud that NBA teams are interested in me. I hope I can show my skills at the workouts."

Diez has been to the adidas Eurocamp in Treviso twice, and although he wouldn't mind going for a third time, NBA workouts are a priority.

"Dani will go to the States for sure, and probably he'll go to Treviso," agent Jose Ortiz says. "He has a top-level body and has improved his shooting a lot becoming a small forward with a very competitive style of play."

For now, Diez focuses on keeping his team away from relegation while upgrading his all-around game before the draft. The 22-year-old forward will become an unrestricted free agent at the end of the season and although returning to the Euroleague is one of his goals, he wants to follow the steps of former teammates Nikola Mirotic, Rudy Fernandez and Sergio Rodriguez in the States one day.

"I talked to them a lot about the NBA last year," Diez says. "I know how difficult it is to get to play in the NBA, but it's everybody's dream. Every chance I get to play there, I will take it."