Is Ante Tomic ready for the NBA?

Is Ante Tomic ready for the NBA? 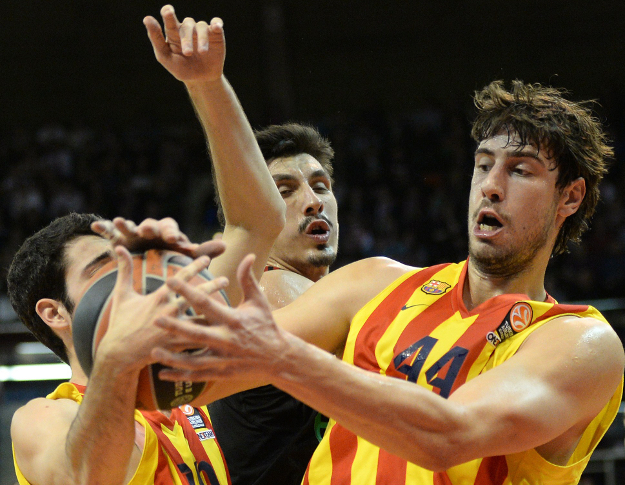 Jazz draftee Ante Tomic has been more vocal recently about the possibility of moving to the NBA than ever before. This week, he told Spanish newpaper El Mundo Deportivo that this is probably his "last train to the NBA" at age 28.

Tomic, who was selected by Utah as 44th overall pick in the 2008 draft, is widely recognized as the top center in European basketball these days. At 7-foot-2 and with an impressive array of offensive skills, he's extremely hard to stop when he's into it.

As far as talent, there's no question that he belongs in the NBA. It's the other things that have been suspect – most notably his attitude, competitive fire and love for the game. Euroleague powerhouse Real Madrid gave up on the Croatian big man in 2012 for those reasons… only to see him explode with arch rival FC Barcelona afterwards.

"What you heard when he was with Real Madrid is that he didn't like basketball enough, that this was just a job for him," an Eastern Conference scout told HoopsHype. "Also that in practice he would just put in the minimum effort required, he wouldn't do extra work there. Maybe that was not a good situation for him, but he's adjusted better to Barcelona and I believe he's matured a lot as a player. I think his progress has been more a matter of better attitude that actual skills development."

Tomic has indeed showed improvement over the last three years as a featured big man for FC Barcelona, going from 6.7 ppg and 3.7 rpg in 2011-12 to 11.7 ppg and 7.6 rpg (both career-highs) this season in Euroleague play. He has also delivered in big games, often punishing his former club in the capital of Spain with dominant performances.

Still, he's not going to be mistaken for a low-post bruiser.

"He has so much talent offensively, his passing is a great asset for any team and that's the thing I like the most about him," the Eastern Conference scout said. "But defensively he's straight soft. He's a hole there."

A Western Conference scout agreed that the soft label that has been attached to him is there for a reason: "He's definitely on the soft end of the spectrum. It’s extremely rare to see him dunking the ball, which is pretty uncommon for a 7-foot-2 and relatively athletic guy. Defensively, he looks a bit stiff and is pretty underwhelming when it comes to using his great length to intimidate."

Derrick Favors and Rudy Gobert are the only two bigs under contact with Utah next season, so the timing would be good for Tomic to make the jump. The Jazz have reportedly expressed interest in buying out Tomic's deal with Barça already. (The Spanish club has a team option on Tomic's contract for next season).

"He would be a good fit in Utah with such big guys," according to the Eastern Conference scout. "Gobert is all energy and hard work, but doesn't possess Tomic's talent. Tomic is just the opposite of him. That's a fantastic and complementary duo to have and I think Quin Snyder is a good coach that can get the best out of him."

"I think that his game would translate to the NBA – he is 7-foot-2, has good hands, great feel for the game, runs the floor pretty well," the Western Conference scout said. "He should find his niche as a rotational player who takes advantage of favorable matchups – preferably under a more traditional, post-oriented coach who prefers to initiate the offense through high post and elbows. However, I do not see Tomic coming to the NBA unless somebody pays him top dollar. He found his identity in the Spanish ACB, is comfortable where he’s at, and at the age of 28 already approached his prime and his game will only decline from here on, not ready mentally and physically for a daily grind."

Tomic wouldn't be the first FC Barcelona big man to express interest in the NBA only to end up signing a new deal in Europe. Slovenian forward Erazem Lorbek, whose rights were owned by the Spurs, did just that three years ago. Will the same happen with the immensely talented but often frustrating Tomic?