Andre Drummond thrives when Greg Monroe is out

Andre Drummond thrives when Greg Monroe is out

There aren't a lot of low-priced options with upside at center in today's NBA action. Build around the position and expect to spend dearly in the process.

While Andre Drummond is our highlighted center, C DeMarcus Cousins ($9,200, 18.4% of your cap) is a regular in this piece, and rightfully so… he's a beast. Boogie put up 75 FantasyScore points against today's foe — Philadelphia — 11 days ago. You get the hint. We say almost every day to start Oklahoma City Thunder guard Russell Westbrook, so you know the drill. The guy is on another planet and is matchup-proof these days. In today's shallow pool, rely on familiar faces.

Drummond thrives when PF Greg Monroe (knee) is out. He posted 18 points, 22 boards and four blocks Sunday; Monroe is doubtful tonight. One cause for concern, though, is Toronto cleans the glass effectively. They allowed the fewest offensive rebounds in the league to the position the last 10 games. The Pistons have few other inside options, meaning Drummond should be active again on offense. Try to pair him with Cousins or Westbrook if you can get creative with the remaining salary.

The high-flying DeRozan has been consistently good the last 10. He has posted outputs of 38.3, 39.3 and 38.8, respectively, the last three games on FantasyScore, and he has touched 32 in eight of 10 games. Detroit has struggled against the position the last 10, and they're a man down underneath. DeRozan could attack the rim with ferocity.

The guard pool is really weak after the upper tiers, and Morrow's hot shooting could be worth the flyer. The Lakers struggle against the 2 and the 3 spots, but Morrow's dilemma is he has averaged 16.5 points per game the last four and just 24.3 fantasy points in that stretch. He's a good option to round out your roster, but don't expect much in supplemental categories.

You can also add some cash by playing FantasyScore. The cupboard is pretty bare on bottom for the forwards, as well, Tuesday, but Robinson has given a consistent base of late. He averaged 26.5 fantasy points in his last two games, and he has produced at least 21 in five of his last six. At this price, you're in good shape if you get 21 or more. The Kings are in the bottom half at defending the 4 the last 10 outings.

Ellis has shot just 38.5% from the floor since Feb. 1, and he is reportedly moody with his role in the offense. He's an undersized two that needs the ball to facilitate his game, while Rajon Rondo's playmaking ability clashes with his style. He has averaged 24.5 fantasy points per game over the last week and faces a tough defense. 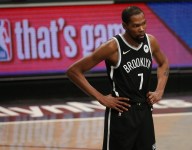