Catching up with Petteri Koponen

Catching up with Petteri Koponen 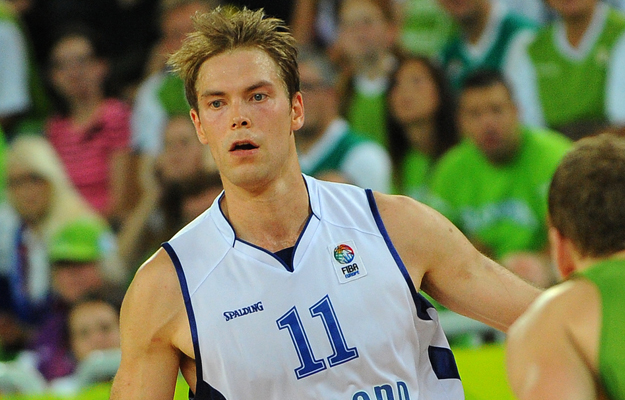 Finnish guard Petteri Koponen, 26, is the only player selected in the first round of the draft between 2006 and 2012 that has yet to play an official NBA game. While he has expressed frustration with the lack of an opportunity in States in the past, he now sounds at peace with his situation in Europe.

You have played for only a couple of teams since you left Finland seven years ago. It's pretty uncommon to find that stability in Euro basketball when you're playing abroad. Why do you think it's been like that for you?

Petteri Koponen: I left Finland pretty early and getting drafted really opened doors for me. I went to Italy and spent four years (with Virtus Bologna) and now this is my third year in Russia. I think this tells you something about the teams I've been on and how much they liked me. I think it tells something about my work ethic and my loyalty too. I have a new deal with Khimki Moscow now and so I guess they appreciate my work.

You played with Finland at the World Cup last summer. The fan support was incredible there, right?

PK: Oh well, I think everybody is going to remember that for the rest of their lives. Almost 9,000 Finnish fans were there and cheered for us throughout the tournament. It was an unbelievable experience and I still get goosebumps when I think about it. It was just something special.

Pretty much nobody expected Finland to make it to the second round of the World Cup, but you had it. How big of a disappointment was not taking advantage of that opportunity in your last game?

PK: For me, the biggest thing is that we did as well as we could. There were close games, I missed a couple of free throws the day vs. Turkey… It was a disappointment, I think we had what it took to make it to the second round. But I think we showed everybody that we can play at that level. I think we had already proved at the Eurobasket that we can beat good teams.

Let's talk about the NBA now. How was it to get drafted?

PK: It was a great moment. Basketball is not the main sport in Finland and I don't think that many people follow the Finnish League and I was drafted when I was still playing there. People were coming to my games, I was chosen to play at the Nike Hoop Summit, played well there… After that, many teams wanted me to take part in workouts. I did like 16-17 workouts and that really opened the doors for me to get drafted.

Draft night was amazing, a dream come true. Every player dreams about being there. I was in New York City at the Madison Square Garden waiting to hear my name called. I had pretty good information from my agent about where I might get drafted and I ended up being the last pick in the first round.

You were selected by the Blazers, but things didn't go too well with them. You once talked about feeling like a hostage. Was it a frustrating situation?

PK: In the NBA, it's about the business and the timing and the team needs. When I got drafted, I thought about waiting one year to be more ready (for the NBA). I had this offer from Italy and decided it was better for me to improve my game rather than go to the NBA and sit on the bench. There were some teams that I heard were interested in trading for me. I thought that maybe if a trade happened, something might happen (NBA-wise) for me. At the end, it doesn't depend on you, but I'm happy with my situation in Europe.

How's the communication with Dallas compared to what it was with Portland?

PK: There were some talks when I got traded there to see if there was going to be an opportunity for me there. The thing is the timing of the situations is different for clubs in Europe and the NBA. The best clubs here build their teams in May and June and in the NBA free agency starts in July, so it's difficult. I didn't even have to wait for that because I had this offer from Khimki and I decided to take it.

Is there an NBA out in the contract for this summer?

PK: There is one for this summer already. It was important for me that they showed they really wanted to keep me by offering this contract early and also giving me the possibility of going to the States if something interesting comes up.

Are you optimistic that the NBA is going to happen for you eventually?