Anthony Davis is a thorn in the Rockets' side

Anthony Davis is a thorn in the Rockets' side 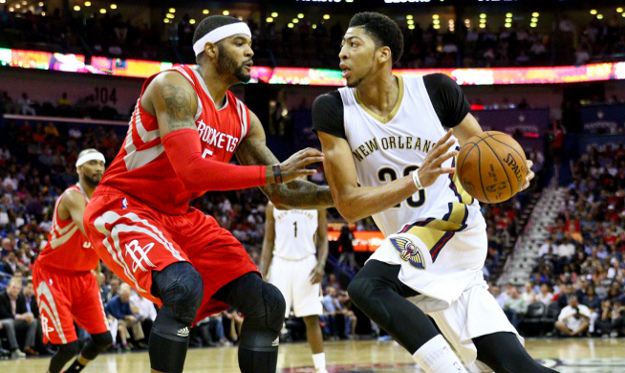 It is another busy Sunday in the NBA, but before you finalize your fantasy lineups, there are a couple of situations worth keeping an eye on.

Charlotte Hornets center Al Jefferson (knee) is questionable, and if he is sidelined for a fifth straight game, center Bismack Biyombo ($4,200 salary, 8.4% of cap) could make a solid value play against a Detroit Pistons team allowing the most points per game to centers.

Keep a close watch on the starting lineup for the Cleveland Cavaliers, as well. Forward LeBron James (rest) and guard Kyrie Irving (hip) could both sit out against the Boston Celtics, and if that’s the case, forward Kevin Love ($7,600, 15.2% of cap) becomes a strong play.

Stud of the day

Davis has dominated the Rockets on both ends of the court this season, and he is averaging 50.10 FantasyScore points in three previous meetings with Houston. Expect another big effort from “The Brow” as he tries to push the Pelicans into the playoffs.

Lopez has been one of the hottest players in the league over the past couple of weeks, and he’s been unstoppable against Milwaukee. In three games against the Bucks, he is averaging 22.7 points on 63.0% shooting and 44.55 fantasy points.

He has been a two-way terror recently, averaging 22.0 points and 3.8 steals over his past five games. He draws a favorable matchup against Phoenix’s 26th-ranked scoring defense, and the last time these teams met, Leonard piled up 44.00 fantasy points.

The rookie has been a bargain of late, and with Jeremy Lin (knee) sidelined, Clarkson has been even better. He has topped 30.00 fantasy points in seven of his last eight games, and he has topped 40.00 in the two games Lin has missed. He is a must-own at his current price tag.

Gallinari is coming off a 47-point explosion against Dallas Friday, and he is averaging 55.00 fantasy points over his past two games. He should be able to keep his recent momentum going against a Sacramento defense allowing the second most points per game in the NBA, and Gallinari offers great upside for the price.

McCallum has been thriving for the injury-ravaged Kings, delivering 25.00 fantasy points in five of his last six games and 30-plus in three of his last four. Sacramento is expected to be without three of its regular starters once again, and McCallum could post a big line in a game that figures to be a high-scoring shootout between two of the league’s worst defenses.

He has struggled against the Spurs all season, averaging just 14.3 points on 37.1% shooting and 4.0 assists. With plenty of options available, there is no reason to pay up for mediocre production.

Anderson has struggled since returning from a knee injury, averaging just 14.33 fantasy points in six games. Despite decent numbers in two starts against Houston this year, he just doesn’t look anywhere close to 100% and needs to be avoided.