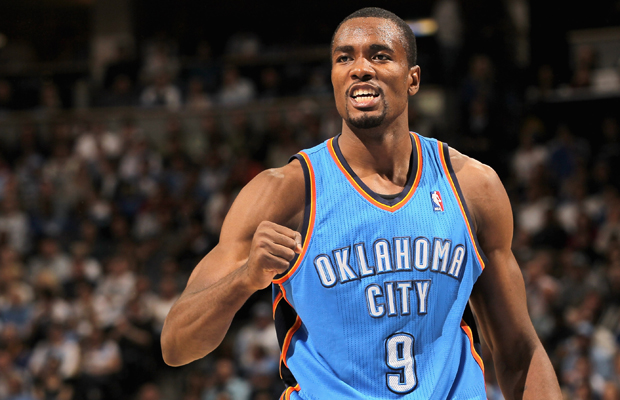 At one point in the Son of Congo documentary, you visit an hospital with kids living in really rough conditions. Were you surprised to see little boys living like that or was that kind of what you expected?

Serge Ibaka: I've never been in a situation where I had to see kids living like that. You can always complain about the problems you have, but then you have people that are worse off. That was one example. It was really sad to see.

Your rep Jordi Vila told me he was really distraught back in the hotel after the visit to the hospital and seeing what he saw there. How did you react to something like that?

SI: That left me thinking for a long time. I was talking with Jordi and I was like, "We have to do something about this, we have to help these kids." I started to think about what I could do to improve their situation. I never expected to see kids in that situation. I was expecting to see sick kids and went there with hopes of doing what I could for them. But then you get there and see these kids just there, lying on the ground. It was difficult to see.

I brought a lot of food to the hospital back then and we're going to bring medicines and food there through the Serge Ibaka foundation this summer. We're working to launch a program to provide help for these kids for an entire year.


In the documentary, we see how you try to help people financially many times. We also see a lot of people flat-out asking you for money. Where's the limit for you when it comes to helping people when there's so many asking for help?

SI: The thing is I can't help everybody. I have money, but I don't have that much money that I can help all people that ask for something. I also have my own family, my daughter… I have 17 brothers. I can't support everybody all the time. When I get there during the summer, I try to do what I can with what is really necessary.

How many people do you support financially in Congo?

Don't you feel a little pressured by the fact that you have to support so many people?

SI: Yes, sometimes. I'm going to tell you the truth about it: This makes me suffer a bit. It's a lot of stress, especially when it comes to family. The people I don't know… well, I will help them sometimes or I won't. But with family, it's an obligation. I always try to prevent this situation from affecting me or affecting my play.

Is this a problem during the season too?

SI: It's not just now. This problem is going to be there for the rest of my life.

What's the thing you enjoy the most and the least when you're back in Congo?

SI: You get to see your relatives and friends and you get the opportunity to make an impact and help people. That's something I enjoy because I'm in a position to do it. There's not many people in the world that can go to a place and change people's lives, kids' lives. That a blessing to me.

On the other hand, there's too many people around me. I have headaches, I lose weight… Sometimes I go for just 10-12 days and it's still problems. But you know? Every time I learn something new and understand how to deal with situations. But yeah, it's a lot of stress and a lot of headaches. Anyway, since there's a positive side to me being there, I can deal with the bad stuff.

How does the Son of Congo documentary come to life?

SI: I always had this idea of doing a book to tell my story because I thought it would be helpful for the young kids. I always talked with Jordi and Pere (Gallego, his Spanish agent) and other people that I'm close with about doing this book. Then Jordi started talking with the people at ESPN and Grantland and I don't know how he did it, but one day he told me he had spoken with Grantland about it and they would be interested in joining me during a trip to Congo. I was so happy about it! And I had no idea it would be this big. And I don't think they knew either, I don't think they knew they were going to have so much material to work with. In the end, it came out good.

I guess at least some of your teammates have watched the documentary. What have they told you about it?

SI: Yes, they've had. They have congratulated me and they were thrilled about it. Kevin (Durant) told me the first time he started watching, he was about to leave the house in a few minutes and he just couldn't leave because he had to watch the rest of it and it was so good. It was for him like a real movie where you are, "What's going to happen next?" He congratulated me about it.

Wanted to ask you about the Thunder season too. What has gone wrong with the team aside from injuries?

SI: What happened is very clear: Injuries. Injuries have removed us from contention. That was it. Look, there's many people, the fans and those outside the team that don't know what's up. You hear people say, "Hey, this guy is not playing well." People and fans don't know what happens inside the team. I'm going to tell you what's happened with me, for example… I've had a bad ankle all year long. Bad back all year long. It's not just that I got injured late in the season, which everybody knows about… I hurt my ankle with the National Team last summer and it's been bad all year long. I've been taking pills in order to play without pain. That's the kind of season it's been. And it's not just me. Many of my teammates have been through the same thing. It's been incredible. That was the whole problem.

So no changes needed. You just need to get healthy.

SI: If we're healthy, with this group, next year we are going to be very good. We just need to be healthy.

SI: Why are you going to fire him? What has he done? Injuries were not his fault. Why would he go? He has not done anything, he's not responsible for the injuries. He did his best with the team he had. Would other coach do better with a team with so many injuries? What could (Scott Brooks) possibly do about it? The team is with him. You can't blame him for what has happened.

It's going to be a contract year for Kevin Durant next season. With superstars like him in those situations, there's always going to be speculation about the future. Do you think the team is going to be ready to deal with that?

SI: I think so. And I think Kevin is going to handle it very well too. I don't want to talk much about this because I'm not an expert in these things and it's very early… But knowing him, we're going to be good. The way he is as a person, I'm not worried about it at all. He's going to be focused on the team.

Your brother Igor is going to play with Oklahoma State next season. Do you think he has a future as a pro?

SI: Yes, I think so. He's a hard-worker. He puts in work in practice and if he keeps it up he's going to have a future as a pro.

The Spanish National Team plays at the Eurobasket this summer. What are the chances of you joining them?

SI:  I have just finished the season a few days ago. I think it's too early to talk about a decision. We will see.