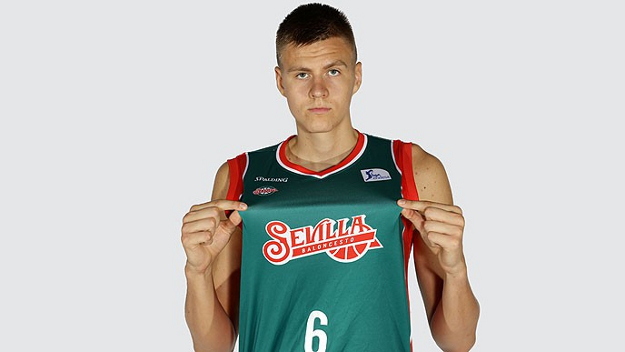 Young athletic forward Kristaps Porzingis could have been a lottery pick last season, but decided to stay another year in Cajasol Seville of Spain to mature as a player. The gamble has paid off pretty well and the 19-year-old Latvian is now projected as a Top 10 pick in most mock drafts.

Porzingis, who recently won the Eurocup Rising Star trophy (an award whose recent recipients include Jonas Valanciunas and Donatas Motiejunas), talked to HoopsHype about the NBA, his time Spain and more.

How was moving from Latvia to Spain at age 15?

Kristaps Porzingis: Well, it wasn't easy at first because I was so young and did not know the language. So the first part of that season was even tougher because I was sick with anemia and we only found that out when I came back to Spain after Christmas. Once I got rid of anemia and I learned the language, I could communicate with the teammates and everything became much easier.

You've been working out with Euro basketball legend Audie Norris. Tell me a little bit about it. How much is he helping you?

KP: Audie has been helping me a lot, we work a lot on little details. I've added a mid-range bank shot this season thanks to him and overall it's great to have him not only for on-court things, but we also watch film together and we analyze my games and where I should get better at.

What kind of advice do you get from Norris that's not strictly basketball?

KP: For example, he told me one story about what happened to him before the draft. He told me that to make sure I don't make a similar mistake. It's good to have him as my coach. That way I can learn from his mistakes.

You pulled out of the draft last season when you were considered a Top 15 pick. What was the main reason?

KP: As soon as I declared for the draft, I knew that I wanted I to stay one more year in Spain to get better. Now looking back I think we made the right decision.

I had a bad start of the season – individually and as a team. I could have played much better, but I think I have improved my consistency and I have picked it up since the bad start of the season. This season has been tough, but I want to say thanks to coach (Scott) Roth for the work he did with me in Seville. I have a lot of respect for him as a coach and I wish him the best.

What went wrong with him in Seville?

KP: I guess it was a mix of being his first year coaching in the ACB and just having pressure from everybody. But he handled all that really well and did not give up on us. It just did not work out the way everybody was expecting.

It's safe to say you're staying in the draft this time, right?

Last year Latvian National Team coach Ainars Bagatskis said you were not ready to play in the NBA, that you would only wave towels from the bench. Have you talked to him recently?

KP: No, I haven't talked to him. I don't know what he thinks of me now. I am not sure what makes him an expert on this subject, but he gave me a reason to prove him wrong.

There was a quote from a GM on an ESPN.com article where it was not out of the question for him that you could be the No. 1 pick in the draft. Thoughts on that?

KP: I am glad to hear things like that, hope that GM gets a high draft pick.

Who has been the toughest matchup for you this season and why?

KP: Got to be Felipe Reyes and Justin Doellman. Felipe is such a great rebounder and a smart player, knows how to draw fouls and play physical on the limit of a foul. Doellman's offensive game is really good and he's such a great shooter, really tough to guard.

How much do you follow the NBA? Who are your favorite players?

KP: I always watch all the highlights after the games and I try to watch as much NBA as I can, but it is a problem because of the time difference. I really like KG. I have seen a lot of his videos. My brother Janis made a tape with highlights of KG's post moves for me to watch and study. I like Anthony Davis too. He is playing unbelievable this season.

Finally, did you get your wallet back?

[Translation: "If anybody found a wallet in Seville with my ID inside, please at least give the ID back to me. Thanks."]

KP: Haha. Yes, I did. I am very lucky somebody gave it to the police with all the stuff inside!