Stephen Curry, Golden State: A devastating offensive force for the best team in the NBA and a joy to watch too. An All-NBA 1st Team pick for 89.8 percent of the HoopsHype readers that took part in our poll.

James Harden, Houston: Kept the Rockets afloat (and then some) while Dwight Howard was sidelined. The Rockets had no business finishing No. 2 in the Western Conference, but Harden made it happen.

LeBron James, Cleveland: Had a slow start of the season (for LeBron standards), but was the driving force behind Cleveland's strong second half of the year.

Anthony Davis, New Orleans: Carried an average NBA on his back and into the playoffs. Two-way player that led the league in PER and will remain an MVP candidate for many years to come (if he can stay healthy).

Marc Gasol, Memphis: The leader of the gritty Memphis Grizzlies, Gasol was selected as the top center in the game this season by 48.1 percent of HoopsHype readers.

Chris Paul, LA Clippers: So good people take his excellence for granted. Was never mentioned as an MVP candidate even though he had one of the best seasons in his career.

Russell Westbrook, Oklahoma City: Was coming off an injury, but you couldn't tell. Played with reckless effort and led the NBA in scoring. Came close to taking the Durant-less Thunder to the postseason.

LaMarcus Aldridge, Portland: Averaged a career-high 23.4 ppg for a very good Portland team (till Wesley Matthews got injured). One of only three players to put together a 20-and-10 season in 2014-15.

Pau Gasol, Chicago: Bounced back this year and posted some of the best numbers of his career at age 34. His 11.8 rpg were a career high.

DeMarcus Cousins, Sacramento: Was once again pretty much the lone bright spot in a disfunctional Kings franchise. The team is more of a headache for Cousins now than the other way around.

Kyrie Irving, Cleveland: Crafty point guard with almost unparalleled ballhandling and shot-making skills. The best is yet to come.

Klay Thompson, Golden State: Lights-out shooter with the ability to play lock-down defense too. His torrid shooting streaks were among the highlights of the 2014-15 season.

Tim Duncan, San Antonio: Just another year at the office for TD. Keeps making a great impact in 30 minutes per game for the eternal San Antonio Spurs.

DeAndre Jordan, LA Clippers: Still doesn't have an offensive game aside from dunks, but his rebounding and shot-blocking are fantastic assets for the Clips. Likely to land a max deal this summer. 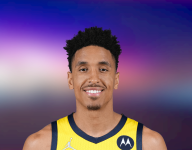 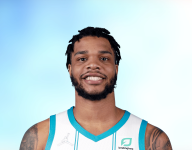