Jahlil Okafor: A franchise builder or another big man bust?

Jahlil Okafor: A franchise builder or another big man bust? 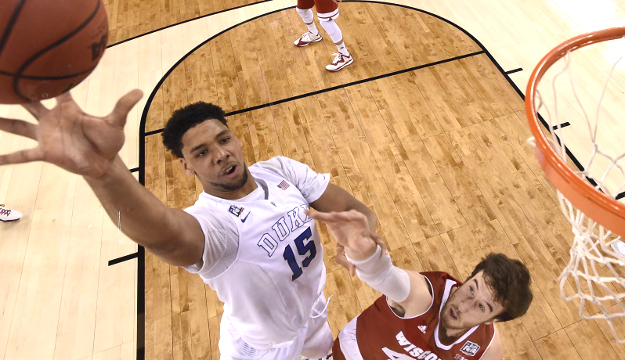 Jahlil Okafor is no stranger to the spotlight. (Trust me, when you are 6-foot-7 in 8th grade, you are going to stand out). He is no stranger to the hype either. Seemingly, Okafor has been the prized, can’t-miss prospect from his 2014 high school class since he was in diapers. Every college campus he stepped on, an offer was immediately placed on the table. An NBA executive said before Okafor's high school senior season he was the most skilled high school center he had ever scouted.

Big shoes to fill to say the least.

OK, so let’s get this straight from the start – Okafor can play. There is no debating the fact that at the college level he was beyond a dominating force. When Coach K publicly notes that you will be a one-and-done before you step foot on the floor in your first college game, then you know you can play. (And hey, maybe it is a good thing for Okafor that he is leaving, the next Duke class might be even better than this year's crop. Insider hint: Keep an early 2016 draft eye out for Chase Jeter).

You don’t have to be a basketball savant to realize 6-foot-11, 270 pounds with a wingspan that spreads half of the Great Wall of China can make tidal waves in college basketball. And anyone watching the national championship game (especially those viewers in Wisconsin) caught a glimpse of how impactful he can be. Okafor put his Duke teammates on his back (literally) late in the game and made two man among men plays in the low post back-to-back to lead Coach K to another championship.

So what separates Okafor? Why is he different? What is going to keep Jahlil Okafor’s name off the list that includes Greg Oden, Hasheem Thabeet, Eddy Curry, Michael Olowokandi and even Emeka Okafor?

At Duke, Jahlil spent 53.4 percent of his offensive touches dominating on the low block. Most high-level post players are able to use a few go-to moves effectively on a consistent basis in the post, but only a rare breed are able to score from virtually anywhere in the post effectively. Okafor falls into that class:

And Okafor doesn't just have one low-post move to go to in these situations. He allocates his moves evenly and effectively among right shoulder and left shoulder hooks, power drop steps, face up Tim Duncan-esque jumpers, counter move up-and-unders, quick spins, and baby step away fades. Okafor has the full arsenal in the post, a skill set and foot work mastery that has many scouts drawing comparisons to a Phi Slamma Jamma alum Hakeem the Dream. 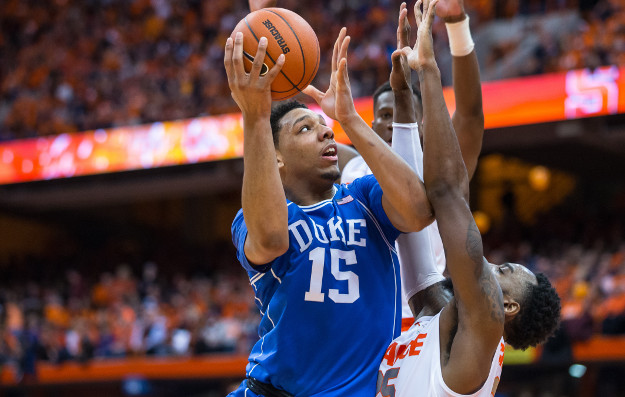 However, the big question is… Can Okafor be a superstar? Barring injury of course, Okafor will be a productive player. But productive isn’t good enough? With fellow Chicagoan Anthony Davis about to break the bank on a max deal, can Okafor become that level of player? Can he break the stigma of The Curse of the College to Pro Big Man? In this day and age, good enough is never good enough.

Like it or not, Okafor is not going to have this luxury of dominating the post in the NBA. It’s just not how the game is played anymore and the difference between going up against a 7-foot athletic beast-type Marcin Gortat every night compared to a 6-foot-9 slender post from Clemson is literally night and day. However, what Okafor possesses that separates him from the other former hyped up bigs is not just the skill set that everyone sees on the surface (he won’t blow you away athletically and you won’t see any SportsCenter type blocks) but his ability to do everything with what I call ‘The Extra Half-Second.’

This basically means that in every situation, Okafor is able to do things a half of a second quicker than the defender is used to reacting to. This is what makes Marc Gasol so dominant, he can’t jump much higher than any of you out there reading this article, but his high level IQ and extra half-second ability is what has made him the best center in the NBA. Okafor has this same ability. It’s very rare, especially for a 19-year-old kid.

In pick-and-roll situations, Okafor finished at a points per possession rate of 1.588. That is extremely high level. Okafor’s soft hands, which allow him to catch everything thrown his way, coupled with his ability to quickly get out of the point of attack in ball screen situations will translate very well to the NBA.

But what is even more impressive than his finishing ability in pick-and-roll situations is his ability to find the open man out of these situations as well as low-post doubles to flow directly into player movement/ball movement. In pick-and-roll situations, Okafor has a 64.5 percent score rate when he passes out of the roll. (This means quick touch passes to the opposite big, kick-outs to the open shooter on the wing by way of his peripherial vision – 'half-second' quick split decisions). When hard doubled in the post, which happened on 20.9 percent of Okafor’s touches on the block, Duke scored at a points per possession rate of 1.186.

Okafor’s ability to see the next play developing before it happens is what will separate him from other bigs and what will make him a very successful offensive NBA center. More importantly than a super-athlete big who pins shots against the glass is a center who the offense can run through basically as a ‘point-center’ (similar once again to Gasol and Duncan).

The area that is continually questioned in Okafor’s game is his defensive ability and whether he will he be able to guard elite centers in the NBA. In isolation situations in college, Okafor was giving up an adjusted field goal percentage of 44.6 percent to his opponents and ranked in the lower 70 percent of college basketball in isolation defense. That is a glaring statistic. How is he going to be able to defend elite NBA bigs if he can’t stop a Kinesiology major from Virginia Tech? His foot quickness and overall explosiveness are not going to be what Okafor hangs his hat on.

But once again, his high level IQ and 'half-second' ability is what will make him a better-than-average defender in the league. He’s never going to be Marc Gasol on the defensive end, but he has the potential to flirt with that type of ability. Once again, one of the most important aspects for a big is not only how they function offensively in the pick-and-roll situations, but also how they are able to defend it. In pick-and-roll situations at Duke, Okafor held opponents to 0.677 points per possession rate and a percent score rate of only 25.8 percent.

So as he might struggle in isolations situation, more importantly, he thrives in team defensive reads and rotations/adjustments.

However, one flawed area of Okafor’s game there is no getting around is his free-throw shooting. And I think we all have already seen through the NBA playoffs how vital big’s free throw shooting ability is (DeAndre Jordan, Dwight Howard). Shooting 51 percent from the stripe isn’t going to cut it. Even if Adam Silver makes the rule change where there is no more Hack-a-X, bigs have to be able to convert from the line. And whether GMs like to admit it or not, free throws are often the determining factor of what wins and loses games. Okafor is more than a liability at the line right now.

As you can see, Okafor has all the potential to be a very dominant force in the NBA. He will be successful. The question is just to what level? Solid contributor? All-Star? All-NBA? MVP? Time will only tell, but the reason he will be good is not because of any of the skills that are seen on the surface and not because of his dominating college low-post scoring ability. It will be due to his 'half-second' ability and his high level IQ.

Many scouts want to compare Okafor to an Al Jefferson in the low post or a poor man’s version of Olajuwon with his footwork, soft hands, and finishing ability. However, if Okafor is truly going to be a next level impact big in this league he is going to have to be the next Marc Gasol; in every aspect of his game, offensively and defensively. Big shoes to fill, or big zapatos, I should say.