Dwyane Wade has been a noticeably underpaid NBA superstar

Dwyane Wade has been a noticeably underpaid NBA superstar

The NBA world was shocked a couple of weeks ago when reports surfaced that Dwyane Wade staying in Miami was not a done deal with a wide gap between what the Heat Lifer wants and what the franchise is willing to offer.

While Wade has made a ton of money during his NBA career, you can make an argument that that the 11-time All-Star has been underpaid throughout his years in the league. Wade, who led the franchise to its first NBA title in 2006 and is arguably the top player in team history, has left money on the table in negotiations with Miami before and surprisingly has never been the highest-paid Heat player in any of his 12 seasons in South Florida.

Looking at the numbers, you can see where Wade’s camp is coming from with their contract demands. With recently acquired Goran Dragic hitting free agency this offseason and up-and-coming center Hassan Whiteside due for a big pay day next year, the Heat have an interesting puzzle ahead on the financial side. 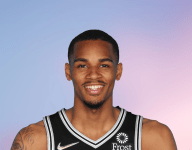