Catching up with Draymond Green

Catching up with Draymond Green

Along with two-time WNBA MVP Candace Parker, you hosted the Gatorade Play it Forward Performance clinic. How was your day? Did you coach the kids Steve Kerr-style?

Draymond Green: I was just being me. I didn’t do too much coaching, just trying to teach the kids a little bit but also motivate them. It was a great day. It was a great opportunity to be a part of this and I’m thankful Gatorade asked me to be here with the kids.

One of the awarded kids [Grant Fisher, Cross Country category] is from Michigan like you.

DG: That’s great. That shows the talent that comes out of Michigan, all over the board. We have athletes that perform at the highest level in all sports.

Congrats on your five-year contract. Was there any team out there that could have convinced you to leave Golden State?

DG: Well, there were a few teams out there, but at no point did I feel that leaving Golden State was the right decision.

Team management is trying to keep the core together, but there’s always some changes. One is David Lee going to Boston for forward Gerald Wallace. What can he bring to the table?

DG: Obviously he’s a veteran presence. He’s been in the league for a very long time, he played at the highest level and he’s done some great things. I think he brings versatility, a guy who falls in that category of being able to switch small forward-power forward positions… So I think he definiteley adds something to the roster.

Lots of signings already in free agency. Which Western team is currently the biggest threat for the Warriors in their quest to reach the Finals again?

How do you feel when some in the media write that your title comes with an asterisk because of the Cavs injuries?

You mentioned that you want to play with Team USA at the next Olympics.

DG: Yeah, that’s right. I’ve got invited to the training camp so I’ve been getting in shape, trying to go out there and give my best performance. Just looking forward to the process. 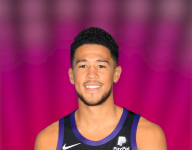