Spurs guard Tony Parker needed just one basket to surpass Greece’s Nikos Galis as the leading scorer in the history of the Eurobasket. He got it early in the France-Poland game (69-66).

Parker played 62 Eurobasket games to get that No. 1 spot, which is a testament to how committed he’s been to the French National Team over the years.

That Galis was still the leading scorer going into the tournament with just 33 Eurobasket games played may tell you something about the scoring machine the Greek guard was in the 80’s. 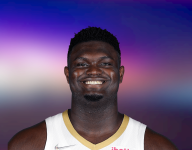