As most NBA observers expected, the New York Knicks went through a rebuilding year in 2014-15, the team’s first under the stewardship of coach Derek Fisher and president Phil Jackson.

After an offseason of key pickups in the draft (Kristaps Porzingis, Jerian Grant) and free agency (Arron Afflalo, Robin Lopez), however, the question on every Knicks fan’s mind is: Can this year’s squad push the rebuild ahead of schedule? If a few pieces fall into place, they just might. Here’s what New York needs to make a return trip to the postseason:

New faces aside, the Knicks will still go as far as franchise player Carmelo Anthony can carry them. But it’s impossible to carry a team from the bench, where nagging knee issues forced Anthony to sit for over half of last season. Anthony remains one of the game’s most gifted offensive players – he still averaged 24.2 points per game last season despite that balky knee. The Knicks will need him to put that talent on full display to reach their potential.

Porzingis just turned 20 in August, so he’s raw. But the Knicks are tantalized by his talent, and he’s set to start when the season begins. If his superior shooting touch for a big man outweighs his need to gain strength, he’ll give New York an offensive boost sooner rather than later.

NBA readiness is less of a worry for Grant, who’s three years older than Porzingis and played four years at Notre Dame. He averaged 16.5 points and 6.7 assists as a senior and should fit right into the Knicks’ backcourt rotation. He also has bloodlines working in his favor: He’s the son of 11-year NBA veteran Harvey Grant, nephew of former Bulls and Magic big man Horace Grant, and brother of 76ers forward Jerami Grant.

Fisher brought nearly two decades of NBA experience to New York’s bench last season, but none of it as a coach. Factor in that he also installed a new offensive system – the vaunted triangle –  and last year was an adjustment all around. Having a season of experience will matter for both Fisher and his players this year.

Afflalo and Lopez are seasoned pros, and they’ll need to play like it right away for the Knicks to threaten for a playoff spot. Afflalo will look to play like he did with the Magic two seasons ago, when he averaged 18.2 points and shot almost 43 percent from long range. Lopez will make the team more stout on the interior defensively, but health is a concern with him, too: He missed 23 games in 2014-15.

The Knicks won just 10 games at home last year but regularly packed Madison Square Garden anyway, finishing fourth in the league in attendance. If the product on the court starts giving those fans more reason to be excited, New York will enjoy a home-court advantage like few other teams in the league.

When the clock starts the city calls timeout. Watch the Knicks in action against the Milwaukee Bucks on MSG this Wednesday, October 28th at 7:30pm. Don’t forget to keep up with the Knicks on msgnetworks.com. United We Watch. 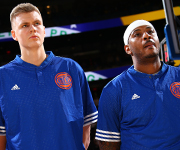