Scott Skiles is not amused by Mario Hezonja's nutmeg attempt

Scott Skiles is not amused by Mario Hezonja's nutmeg attempt

One thing Magic guard Mario Hezonja doesn’t lack is confidence. He has a quick trigger and is not opposed to making the risky play… which you know is going to be an issue with a head coach like Scott Skiles in Orlando.

Hezonja played significant minutes early in the season but has seen his playing time cut recently, mostly getting burn in blowout games only. With the Magic in need of outside shooting and Evan Fournier in a slump, that might change, though. 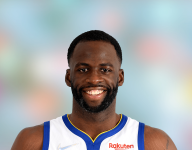