oh my goodness where has this video been my entire life pic.twitter.com/VuUcb0Qvuz

Porzingis & his teammates in Spain loved to dance pic.twitter.com/mrlLoPfQ5a

Those were part of a bunch of promotional videos put together by Baloncesto Sevilla in the last couple of years. Get ready: There’s much more from where that came from.

Wizards draftee Tomas Satoransky tries to deliver a serious message for the fans before the 2014 playoffs begin, but Porzingis and the other kids on the team just can’t behave.

Porzingis and his teammates thank Baloncesto Sevilla fans for supporting the team throughout the season and do so by getting totally turn’t up.

Berni Rodriguez and Pierre Oriola wonder if fans will show up for their next game. So does Porzingis, but in Latvian, which his teammates don’t understand. Porzingis apologizes.

Baloncesto Sevilla wants to sell tickets for its game vs. Unicaja in April, a holiday season in Seville. Porzingis and his teammates again wonder if fans will fill the stands. Of course they will, they conclude.

Porzingis video bombs veteran swingman Berni Rodriguez and promising big man Willy Hernangomez, who would eventually be drafted by the New York Knicks too. The Latvian forward then calls Rodriguez the best team captain in the world.

Outtakes of the many promotional videos the team shot during the season. Porzingis’ dancing moves that didn’t make the cut are included. The Latvian big man is also shown miserably failing to deliver his lines. 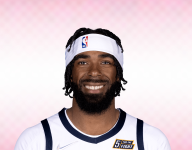