Caron Butler: The night I was drafted

Caron Butler: The night I was drafted

Excerpted from Tuff Juice: My Journey from the Streets to the NBA by Caron Butler and Steve Springer. Published by Lyons Press. Book can be purchased online at Amazon.

No one else at the table knew that someone from the Miami Heat had called Raymond. But then the tension around me broke and the uncomfortable wall of silence was shattered by thunderous cheers as the commissioner told the crowd and a worldwide TV audience, “With the 10th pick in the 2002 NBA Draft, the Miami Heat select Caron Butler from the University of Connecticut.”

I broke down and started crying. My mom started shaking. My grandmother started tearing up. And Andrea was smiling from ear to ear.

As I headed up the steps into the spotlight to shake the commissioner’s hand and face the nation as a professional basketball player for the first time, my first thought was, “I made it. Now, don’t fall.”

Then, I started replaying the journey that had brought me here.

I thought about how far our family had come from the cotton fields of Mississippi.

I thought about the decades my grandmother had put in working at a tractor manufacturing plant in Racine, Wisconsin, to support my mother and her other children.

I thought about my mother working one, two, three shifts a day, piling up so many hours her nickname became “Overtime,” all to make sure my brother and I would have a better life.

I thought about the rough streets of the south side of Racine where I sold drugs, dodged bullets, and first learned to dribble a basketball.

I thought about Junebug, once the drug kingpin of Racine, all the millions spent on crack cocaine, and all the wasted lives left behind.

I thought about my Uncle Carlos, whose dreams of college and a basketball career, of perhaps hearing his own name called in the draft, were destroyed by a drug bust that sucked him in and landed him behind bars even though he was an innocent man.

I thought about James Barker Jr., Andre King, and Black Rob, all close friends of mine who were shot to death.

I thought about all the other casualties of the gang wars I was a part of in the 1990s.

I thought about my mom driving down to the 18th Street park night after night to pull me out of that druggie hangout.

I thought about being arrested and locked up in the Ethan Allen correctional facility when I was fifteen with my mother spending much of my first night there outside the gates in her station wagon.

I thought about the time I spent in solitary confinement in Ethan Allen, alone with my Bible and my faith.

I thought about those dark days when I could have never even imagined making this walk up to shake the hand of the commissioner of the NBA.

I thought about the birth of my daughter, Camary Harrington, my first child, while I was in Ethan Allen.

I thought about the head of the Ethan Allen parole board who set me free even though I had to break the rules to get to him.

I thought about Detective Rick Geller of the Racine Police Department, who gave me the second chance my Uncle Carlos never had.

I thought about Jameel, who convinced me to join his AAU team and gave me a vision of what my world could be like if only I would cut my ties to the street life.

I thought about Max Good, a coach who took a chance on a kid with a troubled past, admitted me to a prep school in Maine, and taught me so much about basketball, and about life.

I thought about UConn basketball coach Jim Calhoun, who also gave me a chance when he had his pick of the litter with so many other talented high school stars elbowing each other to get in better position to make the UConn recruiting class.

I thought about my little brother, Melvin Jr., and how proud I was of him and his resolve not to follow the rocky road I chose growing up.

And I thought about Andrea, who had given me love, stability, and the hope for a normal family life.

As I reached the commissioner, he said, “Congratulations. How do you feel?”

You can buy Tuff Juice: My Journey from the Streets to the NBA online at Amazon. 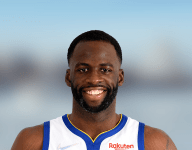