With a win over Nikola Vucevic‘s Montenegro on Saturday, Georgia qualified for the Eurobasket for only the fourth time in the history of the country. Courtesy of Warriors center Zaza Pachulia, we have footage of the post-game celebrations.

Worth noting: Pachulia’s commitment to his National Team is rare for an NBA player from a country that’s not exactly a basketball powerhouse. He’s been a fixture with Georgia for many years now even though their biggest success was finishing at No. 11 in the 2011 Eurobasket. So hat off to Zaza. 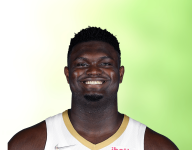