Laker teammates took to calling Nick Young Bruce Bowen in the preseason because of his newfound defensive prowess (or so they said). Could they be into something?

No, probably not. Swaggy P is the rotation player with the worst Defensive Rating on his team. He’s capable of some good defensive plays here and there, though, like this one against Klay Thompson Friday night, which got him pretty excited. 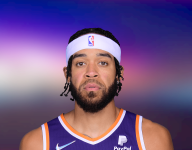 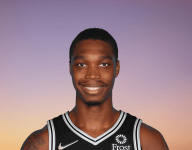 Jalen Brunson to sign four-year, $110 million deal with Knicks, Mavericks never got to make an offer

Stephen A. Smith: Nets not interested in Heat's assets, Kevin Durant wants to be in Phoenix