Thunder center Steven Adams, listed at 7-feet and 255 pounds, nearly destroyed Isaiah Thomas (5-foot-9, 185 pounds) with a screen midway through the first quarter of the Oklahoma City-Boston game on Friday. No complaints from Thomas after the game, though.

Isaiah on talking to Steven Adams after screen: "He had said, ‘Your bigs need to call the screen out.' And I just said, ‘You’re right."

#Celtics guard Isaiah Thomas said Steven Adams knocked wind out of him on screen, called him one of strongest guys in league.

I wonder how many days I'd be in bed after running into a Steven Adams screen. 25-35 is a conservative estimate. 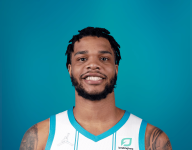