What do we make of D'Angelo Russell?

What do we make of D'Angelo Russell?

When NBA fans first got a real look at D’Angelo Russell playing against, something resembling, NBA level competition during the 2015 summer league, some of the worries scouts had about Russell’s athletic limitations were on full display. During the tournament in Las Vegas, Russell struggled to finish at the rim and looked worryingly slow playing against better athletes. Overall, Russell made only 23 of his 61 (37.7 percent) field goal attempts and turned the ball over on 27.4 percent of his possessions.

Steadily throughout his rookie season however, Russell began playing better in the middle of a Kobe Bryant exit show that on balance probably wasn’t particularly helpful on any of the young talent on the roster. By the end of the season, Russell was consistently playing 34 or more minutes each game and had a few memorable performances including a 39-point outburst with eight three-point makes against the Brooklyn Nets in March.

After the initial poor impression, there was suddenly quite a bit to like about Russell’s game. Every now and then, he’d throw some brilliant pass from the pick-and-roll and making some exceptional plays threading the needle to the roll man. At the top of the draft, teams often look for players with high “upside”, which in almost every case means some attractive combination of being tall and able to jump high, but once players actually get into an NBA gym and work with trainers the results can be surprising.

Many who saw Giannis Antetokounmpo play at the 2012 adidas EuroCamp weren’t particularly impressed by his explosiveness and Kawhi Leonard lost to Enes Kanter in maximum vertical jump. While Russell looked like he was by no means an athletic freak, by the end of last season clear progress had been made and Russell was on his way to becoming a solid NBA athlete.

Coming into the 2016-17 season, expectations were high and many expected Russell to be well on his way to becoming an All-Star caliber, or even superstar, point guard. And even by a more reasonable estimation, Russell hasn’t surpassed anyone’s expectations this season.

Statistically, Russell’s counting stats are almost the exact same as last season, from scoring, to rebounding and defensive numbers. Russell’s usage rate is up from 24.2 to 27.1 percent ranking him 13th among point guards and his assist rate has seen a slight uptick from 21.2 to 27.4 percent (and from 3.3 to 4.4 assists per game). However, Russell’s efficiency numbers have stayed quite a bit under the league average and haven’t improved from last season at all. Russell is shooting only 39.6 percent from the field, and his 1.70 assist-to-turnover ratio ranks just 70th among 85 qualified guards.

It’s actually quite baffling that Russell doesn’t get more assists, and if you looked at his highlight reel you’ll find the types of pocket passes and pick and roll plays you’d expect from a guard racking up almost 10 assists per game. The paradox seems to be that Russell is a good passer who doesn’t get assists.

Partially Russell’s lack of assists is due to the Lakers’ style of play. Head Coach Luke Walton runs his offense similar to the way the Warriors do, and the distribution of ballhandling duties in the offense is rather egalitarian. Still, Dennis Schroeder is averaging 6.2 assists per game and while the Hawks’ offense probably gives slightly more opportunities for the point guard to get assists, Russell should be the better passer of the two.

Comparing Russell to other left-handed pick-and-roll players is probably rather unimaginative, but it’s difficult not to do so to try and get an idea of where Russell is now and how he needs to develop. Overall, Russell is solid but not exceptionally dynamic. He’ll run the pick-and-roll correctly, if a defender helps off a shooter incorrectly Russell finds the right guy on the weak side of the roll man if left open and all that good stuff, but in terms of attacking the initial pick Russell doesn’t put pressure on the defense like a Manu Ginobili or James Harden.

This is also partially where Russell’s limited athleticism comes into play. As the pick-and-roll ballhandler, Russell is producing 0.65 points per possession ranking him in the 22nd percentile. Russell almost never gets to the foul line or all the way to the basket, and is attempting just 2.9 free throws and 2.1 attempts in the restricted area per game. One small measure for a lack of effectiveness is that Russell doesn’t really reject screens, meaning he doesn’t turn down the pick when the defender is overplaying him to get drive from the other side.

Russell has to get to the basket more and has to be able to draw contact when he gets there. If the defense isn’t worried about the ballhandlers scoring in the pick-and-roll, there’s no need to provide help. In basketball X’s and O’s terms, Russell can get a small advantage after the pick, but he’s not a driving threat to the point where he creates a big one. Within five feet of the basket, he has only shot 48.8 percent (39 of 80) this season.

The only way to be an efficient ballhandler in the pick-and-roll without getting to the basket is by being a fantastic shooter. CJ McCollum is the best example of a player who isn’t good at the rim, but by shooting consistently 50 percent from mid-range forces the defense to react. Russell isn’t a great shooter, but just a mediocre one at 36.9 percent from mid-range and 34.6 percent from deep, but if those numbers jump to elite at some point Russell’s effectiveness will jump ten-fold.

One underrated skill Russell has is being a good post-up player and posting up as a guard brings multiple beneficial things to an offense. First, guards aren’t used to defending post-ups and it’s probably easier to be efficient scoring against players who aren’t seven feet tall – in fact, eight of the Top 10 players in post-up efficiency this season aren’t traditional bigs. Second, since the post-up isn’t a tremendously efficient play on its own, but better used as a tool to create cuts and three-point looks, elite passers can bring extra value the the post-up.

As a 20-year-old, Russell is likely to improve quite a bit at every aspect of the game. This season, he’s been quite a bit better defensively and has done well off the ball. Russell has the length to close out to shooters and guard multiple positions on the perimeter in time, though he needs to improve in getting over picks and on the ball quite a bit. Russell isn’t a terrible defender as it looks like he’s improved in terms of effort and attention to detail this year.

The key will be getting to the basket and developing as a shooter, which should open up everything else offensively. There’s some limit to what Russell can do because of his lack of athleticism, but there’s a chance that could improve surprisingly as well. Chris Paul is a fantastic pick-and-roll guard due to deceptive strength and being a great mid-range shooter despite being small, and there’s no reason to think Russell can’t find a way to be special in his own way. 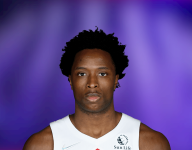 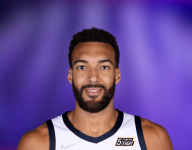 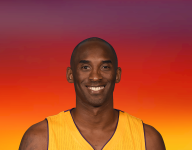