This past summer, the Houston Rockets were at a crossroads.

After a disappointing 41-win season and a first-round exit against the Golden State Warriors, Rockets general manager Daryl Morey had a number of important decisions to make. He had to hire a new head coach, replace Dwight Howard since he was leaving as a free agent (he would ultimately join the Atlanta Hawks), and improve the roster around James Harden.

Morey hired Mike D’Antoni as the team’s head coach – a move that drew some criticism since D’Antoni struggled in recent stints with the Los Angeles Lakers and New York Knicks. D’Antoni wanted to move Harden to point guard, which even Harden described as “crazy” initially. With Harden running the offense, Morey decided to surround him with shooters. The team signed Ryan Anderson and Eric Gordon away from the New Orleans Pelicans – two more moves that were also questioned over the summer.

Now, with the Rockets sitting at 34-14 and holding the third seed in the Western Conference, it’s clear that Morey pushed all of the right buttons to turn his team into an offensive juggernaut.

“We knew that we weren’t going to be a team that could add talent through the draft and our ability to make trades [was hampered] because we didn’t have that period where we could build up a lot of things that would allow us to trade for big-time players, so free agency was going to be the big tool for us, especially in a city like Houston,” Morey told HoopsHype. “Having a bad year like last year was tough, so our main focus was getting back to being a top playoff contender. That meant, this offseason, we needed to pursue free agents who we felt were going to be a great fit. We wanted to get ourselves to be a home-court level Western Conference playoff team and then hopefully have a deep postseason run, which would set us up to be a destination in free agency down the road as well. Obviously, 34-14 puts us right there with the contenders, so we’re ahead of schedule. A lot of guys are playing incredibly good basketball and it doesn’t always happen that way, so it’s been a special year so far.

“We always felt that we played our best ball when he had a spacing four, like Ryan, and someone next to James who could create, like Eric. The fact that we were able to get them in free agency, we were thrilled – even though, at the time, people didn’t seem to think those were the right signings for us. But we were pretty confident they were. … It definitely came together quicker than anyone really expected. We were obviously coming off of a tough year and added some players who we always felt were good fits and a coach who we’ve always been interested in potentially having as our head coach, but the speed in which it came together was definitely surprising.”

When it came to replacing Howard and ensuring that the frontcourt would remain a strength, Morey signed veterans in Anderson and Nenê while relying on youngsters Clint Capela and Montrezl Harrell to step up.

“There wasn’t a superstar [center] available, so we knew we’d have to take the money from the CBA and the money freed up from Dwight choosing Atlanta to add to the team,” Morey said. “If you can’t add a superstar-level player, the next best thing is to add players who perfectly fit what you’re trying to do. That’s what we went for. Nenê was a huge bonus. He was looking for a winning situation because he hadn’t been in one in awhile. He really wanted to come to a winning team and we were fortunate he was available for us. With the remaining money we had, we signed him. He took every last dollar and we are happy to give it to him.”

Houston is currently scoring 114.5 points per game, which ranks second in the NBA behind only the Golden State Warriors’ 117.6. The Rockets shoot (and make) more three-pointers than any team in NBA history, hitting 14.7 of their 40 attempts from beyond the arc each night. They’ve already made 704 threes – nearly 200 more than the second-place Warriors – and they’re on pace to shatter the single-season record for most three-pointers made and attempted.

In what should come as a surprise to nobody, Morey’s Rockets are incredibly efficient too. They average 1.32 points per shot, which is just barely behind the NBA-leading Warriors (1.35). D’Antoni’s run-and-gun system is perfect for Harden and his supporting cast. What we’re witnessing is a historically great offensive team that looks virtually unstoppable when they’re clicking.

But perhaps the biggest reason for Houston’s success is their defense, which has exceeded all expectations. Entering this season, doubters expected the Rockets to struggle badly on that end of the floor. In fact, many people joked that Houston was essentially “punting” on defense since Howard left, D’Antoni was hired and offensive-minded players were added. However, the Rockets currently have the 15th-ranked defense in the NBA, allowing 105.8 points per 100 possessions. That puts them above teams like the Cleveland Cavaliers and Toronto Raptors, and Morey thinks they’ll continue to improve.

“You can’t be 34-14 without a good defense,” Morey said. “We’re about average, and we’d like to be better. I think we can get close to the Top 10 and, if we do that, we should be right there competing for the championship.”

Harden has been outstanding, averaging 28.6 points, 11.6 assists, 8.2 rebounds and 1.4 steals. In addition to leading the NBA in assists, Harden ranks third in the league in scoring. He and Russell Westbrook are currently considered the leading candidates for the NBA’s Most Valuable Player award. Advanced analytics also help show how much Harden has dominated, as he leads the NBA in Win Shares (9.4), Estimated Wins Added (15.2) and Offensive Real Plus-Minus (6.83).

“James is the most motivated player to improve that I’ve ever had,” Morey said. “Starting in year one, his priority in his first offseason with us four years ago was to improve his right hand. He came in and his right hand was dramatically improved. This offseason, he really said, ‘I’m going to take a step forward as a guy who is more vocal, who is leading the team.’ With Dwight choosing Atlanta, he knew he had to step up. He talked to different people around the league and really took a step forward this year as a leader. That was a big priority for him.”

Morey thinks Harden has done enough to solidify himself as the MVP frontrunner at this point.

“It’s pretty easy,” Morey said. “Usually, the MVP comes from a greater-than-50-win team and is the most important player on that team. What he’s doing is incredible in terms of the amount of points he’s putting up either through creating for himself or others. It’s very efficient creating too. We have one of the best offenses of all-time, and he’s generating the vast majority of it. He’s generating 60 to 70 percent of the scoring. I think that makes [the MVP vote] pretty simple – especially since, at the same time, we have a very solid defense that is allowing us to win games when our offense is off.”

D’Antoni has also done a terrific job, and he’s being mentioned as the early frontrunner for the NBA’s Coach of the Year award. Morey raved about his head coach and said hiring him was a no-brainer.

“We’ve always admired what he did,” Morey said of D’Antoni. “Every time we had a coaching availability, he was already booked so we were always sort of admiring his ability to coach from afar.

“I wish the Coach of the Year voters could be with us every day, starting with day one when we hired him. They’d be able to see the groundwork he put in place, the great assistants he hired, the offseason communication with the players and then the tone he set in training camp. He gave all of the players confidence that within this system, they could each have a career-year. Then, showing it in our first few games was incredible. Like James’ [case for MVP], it’s pretty easy to make the case for Mike as Coach of the Year. He’s running the offense, which is one of the best of all-time. I don’t know if you need much more than that.”

One key to the Rockets’ success is that the entire organization is on the same page when it comes to D’Antoni’s offense and the type of players needed in order for it to be successful.

“If you look at the teams where [D’Antoni] didn’t win a lot of games, the players didn’t really fit and there wasn’t a lot of organizational buy-in,” Morey said. “I think the big difference here is that from our owner, Mr. [Les] Alexander, to myself to Coach D’Antoni to James Harden to the other players, there’s an alignment of how we want to play and what kind of players we need to have. That actually helps a lot. I don’t know if it equals a 34-14 start, but it does help a lot when you have a top-down commitment to how we want to play and the players we want to get within that.”

Morey has developed a reputation for making moves at the trade deadline. During his decade as the Rockets’ general manager, he has made 12 trades that occurred in January or February (including many deadline-day deals). As this year’s Feb. 23 trade deadline approaches, Morey has a tough decision to make since the Rockets are playing so well. Does the team’s success mean he should stand pat, or should he go all-in on this group and make a trade that could push Houston over the top?

“We will be less likely to make a move this year, but I have to always listen – as you don’t get many opportunities with a team this good,” Morey said. “If we do any moves, they will likely be for depth.”

Morey’s moves over the last 10 years – big and small – have made Houston a perennial contender. In fact, the Rockets have never posted a losing record during Morey’s tenure. He has built several squads capable of contending without ever bottoming out and rebuilding from scratch. The highest that the Rockets have drafted under Morey is the 12th overall pick, so he had to discover undervalued gems such as Chandler Parsons (38th overall), Carl Landry (31st overall), Patrick Beverley (undrafted), Aaron Brooks (26th overall), Capela (25th overall), Chase Budinger (44th overall), Isaiah Canaan (34th overall) and Harrell (32nd overall) among others.

Houston is one of the few teams that pundits feel comfortable listing as a contender alongside the Warriors and Cavaliers, and they’re certainly one of the NBA’s pleasant surprises. Because of his strong moves, Harden and D’Antoni aren’t the only Rockets who could potentially be honored at the end of the season. Morey is certainly in the mix for the NBA’s Executive of the Year award since he made a number of smart moves that have positioned the franchise for long-term success.

Is there a certain NBA player, coach or executive you want HoopsHype to interview? Send Alex Kennedy a tweet to let him know. 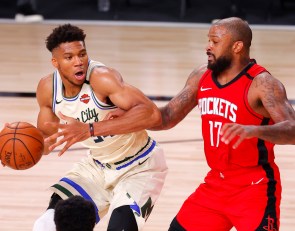