Now that was a good two-way effort from Paul George on Sunday vs. Houston. On the defensive end, he did terrific work on James Harden, who finished the game with just 15 points on 3-of-17 shooting. George also scored 33 points. Two of them came with a thunderous dunk on Clint Capela, a terrific shot blocker. 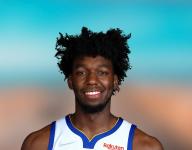