The NBA’s trade deadline is less than 24 hours away. Be sure to keep checking our rumors page to stay up-to-date on everything that happens. Here are the latest rumblings from around the league:

Which teams are currently buyers?

As the NBA trade deadline rapidly approaches, there are a number of buyers to keep an eye on. The Boston Celtics, Cleveland Cavaliers, Washington Wizards, Houston Rockets and Los Angeles Clippers are several teams that are aggressively pursuing win-now moves.

The Celtics are obviously the top team to watch given all of their trade chips. It’s possible that Boston will add a star such as Jimmy Butler or Paul George in the next 24 hours, which would make the Eastern Conference much more interesting.

Not only are these teams very active prior to Thursday’s deadline, these are also some of the squads to watch once veterans start getting bought out by their respective teams.

Which point guards are still on the market?

It was no secret that the Los Angeles Lakers were going to trade Lou Williams. That was discussed several times in this space and it was clearly the best move for L.A. going forward.

Well, now that Williams has joined the Houston Rockets, who are some other point guards out there for teams like the Washington Wizards, Cleveland Cavaliers and New Orleans Pelicans to pursue?

Some of these players (such as Rubio and Jackson) would obviously be more difficult to land than others on the list, but everyone mentioned could be had for the right offer. Over the next 24 hours, it’ll be interesting to see which point guards get dealt (or bought out).

This doesn’t come as much of a surprise since the 76ers’ brass have talked to a ton of teams about Okafor and the center was even benched at one point while Philadelphia’s front office weighed trade offers.

Philly wants a significant return for Okafor since they just used last year’s third overall pick on the 21-year-old center and could hold onto him if they believe offers will improve over the summer. Sources say that the DeMarcus Cousins deal has hurt teams like the 76ers and Brooklyn Nets (who are shopping Brook Lopez), since the Sacramento Kings’ return was relatively weak and that was in exchange for arguably the best center in the NBA.

The Portland Trail Blazers, Chicago Bulls, Indiana Pacers, Boston Celtics and Sacramento Kings are among the teams that have been linked to Okafor, according to sources. The belief among executives is that Philadelphia is just weighing the different trade offers at this point and will execute a deal soon.

The Nets may hold onto Brook Lopez

The same executives who believe that the Philadelphia 76ers will trade Okafor before the deadline pumped the brakes a bit when asked about a possible Brooklyn Nets trade involving Lopez.

It’s no secret that the Nets have had discussions about Lopez with a number of different teams. The Indiana Pacers are the team that has been linked to Lopez the most.

However, Brooklyn is asking for a lot in return for Lopez. Previously, the Nets wanted two first-round picks in exchange for their 28-year-old center. Now, according to Marc Stein of ESPN, they will settle for a first-rounder and second-rounder.

Still, it remains to be seen if Indiana or another team is willing to give that much for Lopez.

The Nets will only move Lopez if they are getting young players and draft picks in return, since that’s what general manager Sean Marks is currently lacking as he tries to rebuild the roster.

The Jazz have gauged interest in Derrick Favors

Last week, a general manager told me that the Utah Jazz might be open to moving Derrick Favors if the right offer came along. Utah’s front office had recently gauged interest in their big man to see what he could return if they were to shop him.

This wasn’t in my last rumor notebook because I couldn’t confirm the news and the Jazz are known for shooting down reports involving their players.

However, Zach Lowe of ESPN heard something similar and wrote:

“They’ve tested the market for Derrick Favors over the last few weeks, according to several league sources; Favors hasn’t been quite the same since coming back from injury, and Utah plays Favors and Rudy Gobert together for only 10 or 12 minutes per game. Utah’s seriousness on Favors is unclear; they are mum as usual, and they don’t want to weaken their team ahead of the playoffs with [Gordon] Hayward heading to free agency. Favors is still an important player. They could be testing the market ahead of a trade around the draft.”

Consider this a confirmation of Lowe’s report. He’s spot on about Utah and Favors.

Who are some options for the Rockets?

Yesterday, the Houston Rockets acquired Lou Williams from the Los Angeles Lakers in exchange for Corey Brewer and a first-round pick.

Rockets general manager Daryl Morey had recently told HoopsHype that any deals from Houston would be about improving the team’s depth and preparing for a playoff push. Williams certainly fits that bill.

With that said, Morey doesn’t seem to be done tinkering with his roster.

According to Adrian Wojnarowski of The Vertical, the Rockets are looking to add a player in the $10-million-to-$12-million range and they’re offering up “expiring contracts/cash savings” in return.

Today, unrestricted free agent Larry Sanders met with the Cleveland Cavaliers. Cleveland has been very active lately in hopes of improve their depth, with point guard and center being two areas of concern.

While the Cavs would likely present Sanders with his best chance to compete for a championship this season, the big man has plenty of options to consider. The Los Angeles Lakers, Boston Celtics, Houston Rockets and Miami Heat among others have also shown interest in Sanders, according to sources.

At 26 years old, Sanders agreed to a buyout with the Milwaukee Bucks and left the bulk of his recently-signed $44 million contract on the table. Now, after six months of working out, the 28-year-old is expected to make his return sometime soon.

In March of 2016, I talked with Sanders and he shared what kind of situation he’d want to be in when he returns to the NBA.

“I’ll say this: I understand who I am as a player and I know what I can bring to any team,” Sanders told me last March. “Now that I’ve gotten the chance to watch a lot of basketball, I just know what I would do on that court. Even from an effort standpoint, I know I can [play harder than a lot of players]. With the kind of player that I am, I just don’t see a team that couldn’t use my services. But I will say, I think it would have to be a very good fit for the both of us. And I think it goes outside of what’s happening on the court – there has to be a connection there. Maybe I’m asking for too much. (laughs) But I just won’t go back to the situation I was in before.”

In that same interview, Sanders explained why he decided to step away from the NBA.

“I got to the point where I realized that the NBA is a machine,” Sanders said last March. “It’s going to keep running, with or without you. If it can keep running without Allen Iverson – Allen Iverson! – then it’s definitely not worried about me. I knew that, and I also knew they really didn’t have the time to get to know me, to understand me and who I am. And look, I totally understand that. I get that. But I just felt like I had to put myself in a better position in life to feel more fulfilled. At the end of the day, I’m left with myself, my loved ones and the life I made. I wanted to be someone who was proud of their story. It was always about staying true to myself. I didn’t want to lose myself and who I was for anything. No amount of money. Nothing.

“I had to take that time for my development, to develop into the type of man that I need to be. That time [to work on yourself] isn’t really given to us, but there’s a lot of value in making some time for yourself and I hope other people can find the time to do that too. Some people never do that or can’t do that, and that just saddens me. Stepping out of the NBA schedule and doing that was good for me. I’m very happy now.”

Sanders has averaged 7.3 points, 6.1 rebounds, 1.4 blocks with a 7.1 block percentage over the course of his five-year NBA career. 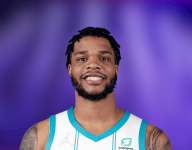 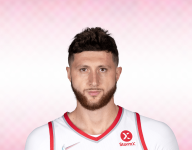