How to build a winning team around Nikola Jokic

How to build a winning team around Nikola Jokic

The NBA has recently seen a sharp decrease in how “offense only” centers are valued, and the easiest type of player teams are able to fit in the middle have been rim-rolling athletic bigs who can both defend the rim and dunk. Players who fit that archetype – Rudy Gobert, Nerlens Noel, DeAndre Jordan, Hassan Whiteside, Steven Adams and others – are most often mostly applauded for their defense (though each is underappreciated offensively in their own ways).

On the flipside, centers who produce most of their value on the offensive end are much harder to find minutes for. Jahlil Okafor is super talented but has been a big minus for the Sixers. Indiana’s second unit with Al Jefferson is terrible. Jason Kidd will start anyone and everyone over Greg Monroe. Jonas Valanciunas probably won’t finish games in the playoffs with the versatile combination of Patrick Patterson and Serge Ibaka. Even DeMarcus Cousins somewhat fits this bill, and he’s averaged 27 points and 11 rebounds over the past two seasons and has yet to be on a winning team.

Barring big steps on the defensive end, Nikola Jokic is one of those “offense only” centers, but the difference between Jokic and everyone else is that his work has shown notable positive signs of translating to team success. With Jokic on the court, the Nuggets have outscored opponents by 5.5 points per 100 possessions, compared to losing by 8.3 points with him off the floor – the equivalent of going from the Houston Rockets to the Brooklyn Nets in scoring margin. Denver has scored 115.3 points per 100 possession with Jokic as well, which is an incredible mark even when compared to the league-leading offense of the Warriors at 113.2 points. The advanced metrics have always loved Jokic, and last season he ranked ninth in ESPN’ Real Plus-Minus. This season Jokic is ranked fifth behind Russell Westbrook and in front of Kawhi Leonard.

Jokic is now famous for his passing highlights, and when it’s all said and done he could finish as something like the best passing big man in NBA history. Beyond that, Jokic is as versatile as centers come – from shooting, dribbling, post-up skills to little things like positioning and screen setting.

When Jokic is on the court, the first rule of the offense is that no cut is left unrewarded. If a teammate is open even for a second, Jokic will find him every time. 64.7 percent of Denver’s field goals are assisted with Jokic on the court compared to 56.7 without Jokic, which is the difference between a bottom-10 mark and the second highest number in the NBA. The value of Jokic’s passing isn’t only about running an offense where the big man facilitates many actions from the elbow. Instead, Jokic is such an exceptional passer he creates points out of nowhere, turning average possessions into dunks, layups and open three-pointers.

Nikola Jokic pass in transition to Gary Harris for the dunk.

On post-ups, Jokic is averaging 1.08 points per possession, placing him in the 92nd percentile and that statistic doesn’t even capture the additional points Jokic creates with the pass. He isn’t that big, and better post defenders can limit him, but on switches and mismatches the defense doesn’t stand a chance.

Surround Jokic with some mixture of shooting, cutting and various offensive skills that NBA players tend to have and that’s already an elite offense. Long-term, the question is on the other end of the floor where the Nuggets have allowed 110.7 points per 100 possessions, ranking them dead last (and that number isn’t much better with Jokic on the floor).

The path for the Nuggets to being a good team that can make noise in the playoffs, or even becoming a title contender eventually, is a relatively straightforward one… Figure out a way to build a good defense since the other end isn’t going to be a problem for the foreseeable future.

That is, of course, much easier said than done, but knowing what the solution is should simplify how the franchise operates and what to value going forward. The ideal team around Jokic would look something like having a power forward/center combo who can shoot and play with Jokic or 15 minutes per game without (or a cheap backup rim protector to play those minutes), on the wing having defensive versatility and shooters who execute the little things on offense (the Danny Green-types), and guards who can get over picks and handle the ball a little bit.

To an extent, the Nuggets already have players who resemble the needed archetypes. Jamal Murray can run the point as a secondary option in the offense and is a great shooter. Emmanuel Mudiay has been terrible on both ends of the floor in his career, but is only 21 and has the size and talent to improve and be a nice fit eventually. Gary Harris is an ideal fit and has already built some solid chemistry on back-cuts and lobs with Jokic. Wilson Chandler, Danilo Gallinari and Will Barton all do different and useful things on the floor, though all are far from defensive stoppers. Darrell Arthur is a bit undersized at center but is a good shooter and can switch defensively, and to an extent that applies to Juan Hernangomez , who has shown flashes in his rookie season.

Before jumping head first into the the trade machine or looking at who the Nuggets could sign in free agency, the first step for the team is simply being better both individually and collectively. There’s a ton of mistakes in every game that could be eliminated, and while it’s hard to demand crazy effort every game through the 82-game season, being solid on closeouts, rotations and one-on-one can take a team a long way. The Miami Heat start Luke Babbitt and don’t have the most obvious talent on the roster, yet still have an elite defense (and one that has actually been better without Whiteside).

The Nuggets have allowed 61.9 percent shooting in the restricted area and give up a ton of attempts… and Jokic isn’t helping. With the Serbian big man defending the play, opponents are shooting 57.4 percent at the rim, ranking him 87th among 95 players with 200-plus plays defended. In pick-and-roll situations, the backside for the roll man is wide open and plays like this where Jokic isn’t able to defend the pass are too easy for the offense.

Nicolas Batum and Cody Zeller pick-and-roll off a horns  set.

The Jazz are the perfect example of a team that is excellent at containing the pick-and-roll. Gobert can drop back in the middle, and guards like Dante Exum, Rodney Hood and George Hill are excellent at navigating picks and have the size to contest shooters even when trailing initially. The goal of the big man is to hold off the pick-and-roll ball handler so that the guard defender can catch up and then to recover to the big to stop the lob and force a mid-range jumper. The Nuggets’ guards aren’t good enough defenders (yet), and Jokic isn’t Gobert so the team will be forced to help on those actions more, but that means the helping defenders have to be excellent at recovering to shooters and stopping the drive.

This summer the Nuggets can get up to a bit above $40 million in cap space, though that number has quite a few caveats. Gallinari will likely decline his $16.1 million player option for next season and the team will have to decide whether or not to keep him long-term and more importantly, and what price a deal could get done. Mike Miller’s $3.5 is non-guaranteed for next season. Harris is also up for an extension, which the Nuggets can roll over to restricted free agency in 2018 to preserve cap space during that free agency period.

Trading Jusuf Nurkic and a first-round pick for Mason Plumlee can be categorized as, if not a mistake, then somewhat of a misallocation of resources. Nurkic has started off well with the Blazers, but he was never going to produce that value unhappy in Denver. However, the big problem is that Plumlee will be a restricted free agent during the summer and presumably the Nuggets traded for Plumlee with the intention of keeping him. Plumlee is a good passer, and while the logic of playing the same way with Jokic on or off the floor is fine, Plumlee will command a pretty big salary for a backup center, and it’s unlikely the Nuggets will be successful playing both big minutes at the same time. Plumlee’s future salary could have been spent elsewhere to build around Jokic’s weaknesses.

As a side note, it’s a bit of a shame Denver couldn’t get Moe Harkless in that deal instead of Plumlee since he’s the exact type of player who would be a great fit with Jokic. There was probably no way to reasonably get Harkless on the table, but the Nuggets situation would look quite a bit better if it had been so.

Denver isn’t known as a big free agent destination, but as top-level targets expect them to be chasing Serge Ibaka and Paul Millsap to fit the power forward spot next to Jokic (those max contracts will likely age poorly, though). Patrick Patterson is an underrated player which the Nuggets would be lucky to grab for the right price, and at the lower end some potential big men on the market are Taj Gibson, Jonas Jerebko and Amir Johnson. At guard, the Nuggets are set with the trio of Mudiay, Harris and Murray.

Every team desperately needs 3-and-D wings, but the market this summer is poor from that standpoint. It’s unlikely any of the restricted guys like Jonathon Simmons or Andre Roberson will be on the move, and the best wings the Nuggets could get are Bojan Bogdanovic and PJ Tucker, meaning the Nuggets could be best served trying to save up salary space for the summer of 2018 and move Kenneth Faried, who will be on the final year of his deal in 2018-19 and is close to dead salary for Denver at this point. 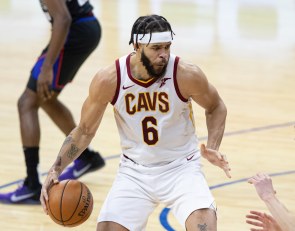