Meet the pro dunker who's trying his luck in Hollywood

Meet the pro dunker who's trying his luck in Hollywood

Chris Staples has had a successful career as a pro dunker, Harlem Globetrotter and model. Now he’s delved into acting in the movie Slamma Jamma. He recently caught up with HoopsHype to talk about his role there, how to improve the NBA dunk contest and more.

You’ve been quite busy lately… You’re still a pro dunker, you’re doing McDonald’s commercials, and now you’re the lead actor of Slamma Jamma. Is this the best time of your life?

Chris Staples: Yeah, it’s great to have all these opportunities. I mean this [acting], I’ve been doing it for not that long and sometimes you don’t realize how much work you have on your plate or whatever, but it’s always good to always have the phone ringing, to have these opportunities.

Slamma Jamma will be in theaters on March 24. You were at the pre-Oscar gala with actress Angela Bassett and other celebrities during the American Black Film Festival. How was that experience?

CS: It was great. It was great to actually meet her and talk to her. She’s a very nice lady. She gave me a couple of words of wisdom. And just to be a part of that circle, just in that environment, really shows the growth during my last couple of years and I hope I can continue to do things like that in the future. You know, I grew up pretty much playing basketball, but to do other things, tapping into other fields, it’s very different but at the same time it’s exciting and I try to learn everything about it. Now I’m feeling more and more comfortable, I’m having fun now.

How did you become involved in this project? What was the casting process like?

CS: Actually the director Timothy Chey contacted me and said he was looking for a basketball player for his next film and I’m like ‘Why not? I’m a basketball player, hopefully, I fit the role.’ So I auditioned for it, he liked it and later he called me to tell me that I got the part. The basketball thing was my comfort zone, but as far as the acting, it was harder that I thought. I’d never been in that environment where I actually had lines and I had to remember everything. So I had to do a lot of studying, and Timothy put me with some of the best acting coaches around L.A. A lot of practice and repetition so by the time we actually filmed I was comfortable with it.

What can people expect from this movie?

CS: They can expect something that they never have seen before. White Men Can’t Jump was such a legendary movie that people still talks about it although it came out 25 years ago.  This is a new age… We have the social media, we have professional dunkers doing some high-flying dunks, there are no stunt doubles… It’s not just a basketball movie. We use the basketball thing as a tool to give the audience a message. It’s a message about faith, making decisions, making the right choice. You can bring your kids, but it’s also for adults as well. It’s an emotional, roller-coaster type film. You’re going to laugh, you’re going to cry, you’re going to be excited, you’re going to be upset. We need more movies like this.

What’s your favorite basketball movie of all time?

CS: I liked He Got Game. I like Denzel Washington, Ray Allen as the basketball player. But now Slamma Jamma is my favorite.

Did you only play basketball in high school or did you try other sports?

CS: I played multiple sports. I ran track, played baseball, basketball, football, and also I did the high jump, which it helped me on the basketball court. I never really dreamed about going to the NBA. My path changed, I tried going overseas and working out over there, and then the Harlem Globetrotters called me back in 2012 and that’s when I realized I could create my own path, that it’s not all about going to the NBA. Something that the Globetrotters did is that they travel all over the world, and that’s one thing the NBA doesn’t do. Being a Globetrotter I visited over 60 countries. I had fun every day going to work, learning new cultures… That became a new reality for me. Now I look at the NBA and I feel like that if you’re not one of the best five players on a team you can be shipped around to different teams, and that’s something I don’t want to go through as a player even though they get paid pretty well. I started playing as a Globetrotter for the first time on my 26th birthday back in 2012, and I enjoyed going to work every day. It was a fun job.

You’ve been to Australia, Japan, Italy… Which trip was your favorite as a Globetrotter?

CS: It’s hard to only pick one, but if I had to choose, I remember the time we went to Afghanistan. We actually got to stay on a military base and perform for the troops. That was great, I mean I never thought I would visit Afghanistan… Just to do that for them, to see their faces, these people that are far away from their families, that made my day because I know how hard they work for our country.

Kmart teamed up with Risewear and they will release a shoe named ‘Rise like Chris Staples’, right?

CS: I love it, my shoes will come out next June. You know, Risewear has very affordable shoes. Not everyone can have Michael Jordan shoes that cost $200. Risewear has affordable shoes and at the same time, they have good quality. It’s OK not to wear the most expensive sneakers and still be cool.

You have won four slam dunk tournaments so far, and last summer you dunked at the Aaron Gordon Dunkfest in Venice Beach… He later said on TV that you and the rest of the dunkers were “the best of the world.”

CS: It was great to hear that from Aaron Gordon, he’s such a great dunker. The 2016 NBA Slam Dunk Contest was one of the best ever. Just to have him at our contest as a judge, and someone like him, who specializes in dunking, to give a compliment like that, it means a lot to me.

CS: Yeah, I definitely think he got robbed [laughs]. But it was such a great contest. They did such a great job. His dunks were more stylish, but Zach LaVine is an awesome dunker too… Now I think they should have split the trophy at the end of the day because they both did great.

This year it was a pretty underwhelming Slam Dunk contest. Players like Paul Pierce were very critical. What’s your take on that being a dunker?

CS: I agree with Pierce about the prop thing. These guys are the same age as we are so when they go to to the Internet they look at the popular dunks and they see people like us using props. But we are performing for different people, we dunk so much throughout the world, so sometimes we have to change it up and use a prop or two because we go to these places every year so we can’t have the same dunks. To bring the NBA Slam Dunk Contest back you have to invite the street guys, I mean if you want the best of the best. And it’s not to step on these guys’ toes because I’ve always said that this is their league. But if you want the best, then why not bring these guys out there? Maybe even have the street guys as coaches. You can’t get much worse now. We’re supposed to be better, we are dunkers. We practice all year.

And the best of all time?

CS: Vince Carter. As far as pro dunkers, my favorite is Taurian Fontenette aka The Air Up There, the guy who did the 720 dunk.

And finally, what’s your best dunk? Your signature dunk?

CS: I’d say the Christ Air dunk. A lot of people like that. 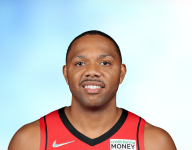