NBA A to Z: David Stern not a fan of resting players

NBA A to Z: David Stern not a fan of resting players

On this week’s NBA A to Z podcast, insiders Sam Amick and Jeff Zilgitt talk playoffs with former NBA Commissioner David Stern. He weighs in on the early postseason action, discusses why he doesn’t miss the league office after spending more than three decades there, and even admonishes one particular team for resting its players late in the season.

Then Sam Amick and Jeff Zillgitt break down what’s going on in the NBA playoffs as the first round starts to wrap up. 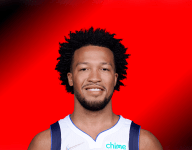